If you thought the month of May has felt much colder than usual, you definitely weren’t wrong.

In fact, the weather in parts of Ontario is currently much more reminiscent of what you might endure during the brunt of winter, rather than mid-May.

To put it into perspective, there were nine days this winter with warmer temperatures than what was forecast in parts of southern Ontario on Monday, according to The Weather Network.

Currently, temperatures are 10 degrees below seasonal in Ontario, which is typically 18 to 19°C for this time of year.

But it’s not just cold temperatures that Ontarians need to worry about, as snow is still a potential threat for areas located in higher terrains.

“This wet snow is not expected to accumulate, but places like Durham, Shelburne, Mount Forest, and even Kitchener-Waterloo may see flakes in the air through parts of Monday,” warns Weather Network meteorologist Tyler Hamilton. 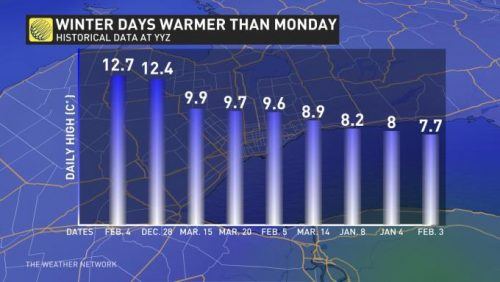 With snow still a possibility throughout the region, and daytime highs in the mid-single digits, parts of the province are currently colder than they were during winter.

“This is a wild stat for Toronto and southern Ontario as we saw nine days warmer this past winter than our forecast high of 7°C on Monday,” Hamilton says. “On February 4, the city actually reached 13°C.”

If we don’t hit 7.6°C on Monday, it will be the coldest Toronto has been this late in the season since 1959, according to The Weather Network.

As we head into the week, conditions are expected to gradually improve through Tuesday, as a low-pressure system continues its trek eastward. However, temperatures will continue to hover below or just at seasonal for much of the week.