“I still think there is a place in our community for shared events,” said David Thorek, the director of operations at Paradise Theatre.

Come December 5, the multi-use venue will reopen to the public after closing in 2006.

Programming will be unveiled this week on November 27, and while that will include mainly film selections, fans (new and old) can also expect live music, comedy shows, panels, talk series and other special events to take place over the coming year.

One of the first people Thorek spoke with was Ana Bailão, the deputy mayor for the south area of Toronto and a city councillor who has served on Toronto’s City Council since 2010. It was 2017 at the time, and Bailão explained how much Ward 9, Davenport (the area where Paradise is situated) had changed, saying it “saw the highest housing value prices in the last four years” and there’s a real “change in the residential makeup with the commercial side changing last,” Thorek told Daily Hive.

The area has become more accessible and popular since the addition of the Union-Pearson (UP) Express, said Thorek.

Thorek is part of a team that’s taken on what he called a “unicorn scenario”, because Paradise Theatre is “a heritage theatre, located in a great neighbourhood in downtown Toronto, close to two subway stops [Ossington and Dufferin], and on a main thoroughfare,” which just doesn’t happen.

“The community is mixed, you’ve got a lot of young families and older generations that have probably been in the same home for 60 years,” said Paradise’s director of programming, Jessica Smith. “Then you have young professionals and students.” 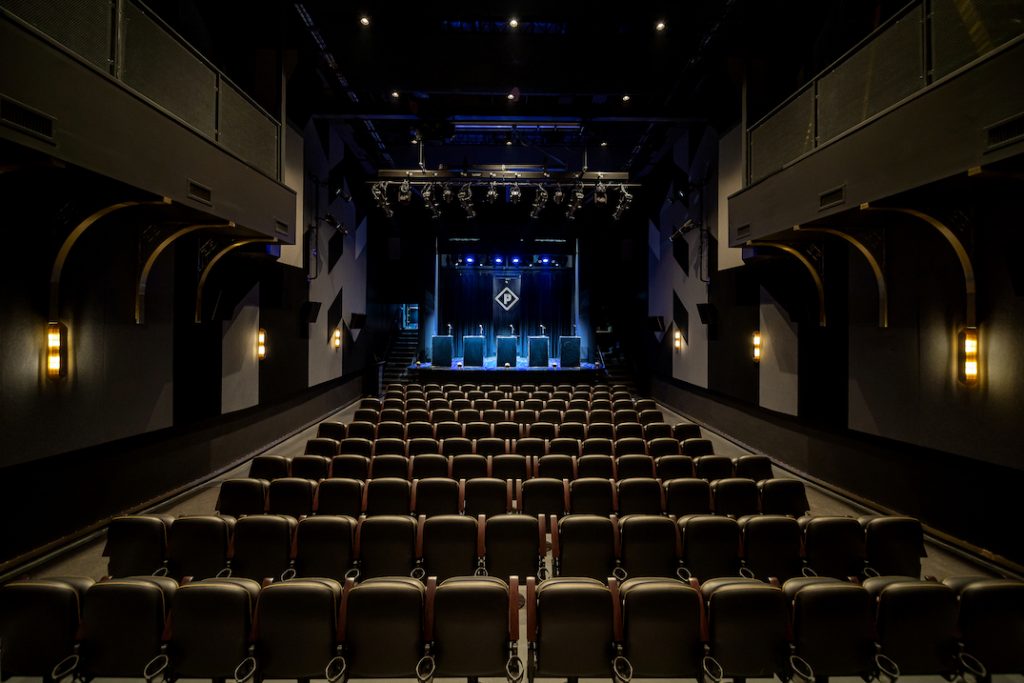 The new venue and its offerings

He noted Tawse’s ability “to thoughtfully plan this out with funds towards the multipurpose venue and towards [securing] a great operations team and great technology,” which has made for a complete overhaul that’s anchored in detail.

The new auditorium has a 4K Barco projector and 7.1. surround sound, and a d&b audiotechnik system with a Yamaha console, for those spec people interested.

There’s Tawse selections on the drink menu, which is pretty fairly priced, especially inside a venue of this magnitude. Guests can choose between Tawse Sparkling Wine, Chardonnay or Cabernet Merlot, each priced at $12. A Molson Canadian tall can runs $7 and you can get cocktails like an Old Fashioned or a Negroni for $14. Scotch is $12. Non-alcoholic drinks like Sprite are $3.*

Upon arrival, the theatre-goers will notice the large sign out front, which is a reincarnation of what the marquee sign would’ve looked like in 1937. The sign was designed by Pride Signs out of Cambridge, Ontario and it was pieced together by ERA Heritage Architects. 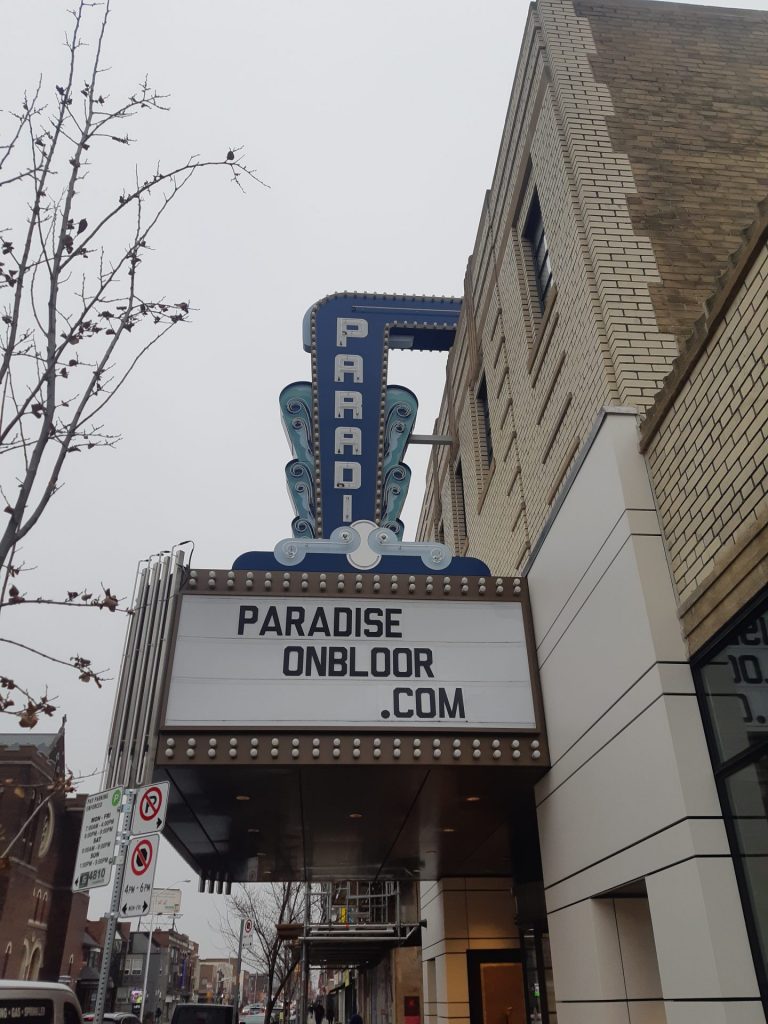 “The architect of this building at the time was named Benjamin Brown, a legendary Jewish architect in Toronto, especially within the downtown core. He did the Balfour Building down at Spadina and Queen, multiple prominent buildings (like the 14-storey Herman Building at Dundas Square), and a number of different theatres,” explained Thorek. “And his colour scheme choices of the time saw a lot of blues, silvers and chrome.”

Paradise Theatre houses 186 standard seats on the ground level and 22 premium balcony seats as well as 12 high top seats. The balcony has its own bar and the premium seats, designed by Barcelona’s Figureas Group, come alongside a “call pod” where patrons can request service or their bill just by clicking the button. And there are a slew of washrooms behind the bar, so you don’t have to leave the top level if you don’t want to.

Also, the first five rows of seats on the ground level can be tucked down into the floor to increase capacity to 312 people. There are also two designated wheelchair locations on the main floor that come with adjacent seating so companions can sit, too. 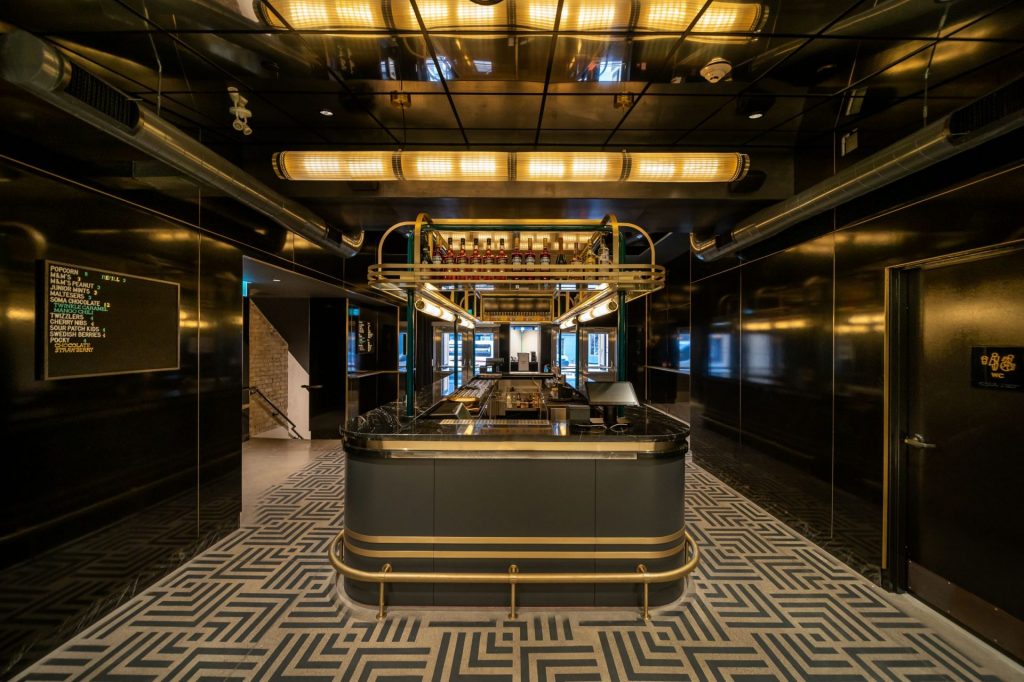 Tickets for general admission on the ground level are $14, while those wishing for the premium seating in the balcony will pay $19. And ticketed events will have varying prices depending on what’s on tap, so live music may be pricier.

Thorek’s favourite part of the venue are the catwalks located in the balcony area where “you’re standing row six over the stage and you can go back to your seat, get served, move around. It’s pretty awesome,” he said.

While the theatre is the main attraction, there’s also a cocktail bar named Bar Biltmore as well as Osteria Rialto, an 80-seat restaurant with executive chef Basilio Pesce at the helm.

The restaurant comes with a wood burning grill, too, and there’s also a private dining cellar-like space where wine tasting and special dinners will accommodate 12 to 14 guests. These additions won’t be open until the end of December or in January 2020, according to the theatre team. 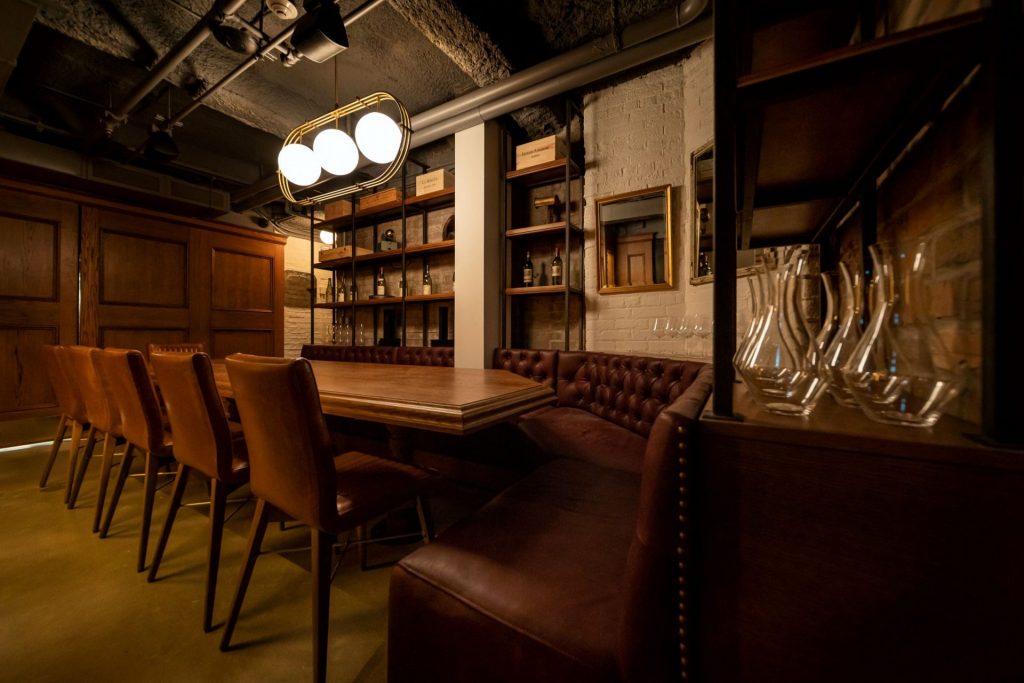 There’s also another building next door (dubbed “Paradise 2.0”) that will eventually serve as a concession space with a full-service café-bar offering.

It is meant to be a destination venue with additions functioning as independent units, so once those open you’ll be able to “have a different experience each and every time, by design and by virtue of what we are presenting at the theatre,” said Jessica Smith, who is behind Paradise’s content programming.

“We’re trying to merge different types of experiences and create a singular, real event out of something, which I find very appealing and hope others do too,” said Smith.

The two films screening during opening week are The Irishman (December 6) and Marriage Story (December 7). In January, the theatre will show films centred around Toronto (“Toronto Plays Itself”),  and feature films from the ’50’s like A Cool Sound from Hell, which according to Smith, has hardly screened in Toronto.

“The film was thought lost for decades and resurfaced at the British Institute of Film in the UK,” Smith said. “TIFF screened it a few years ago but other than that there hasn’t been any public screening to my knowledge — so there’s that element of discovery that we’re including in the programming, too.”

“The first two weeks are fully programmed with December and January accounted for, and there are ‘Coming Soon’ slots that we are holding for newer films,” she added. “Only the newer films are the ones missing from the schedule right now.”

There’s also “relaxed screenings” that are sensory friendly (with dimmed lighting, lower sound, open captioning) offered at Paradise Theatre. And one of Smith’s favourite parts of the programming is called “Family Picks” and happens every Sunday at 10 am.

“We’re showing older, nostalgic, family favourite or modern classic films for kids and families, and during the holiday we will be running these daily. We have 20 kids films programmed,” said Smith. 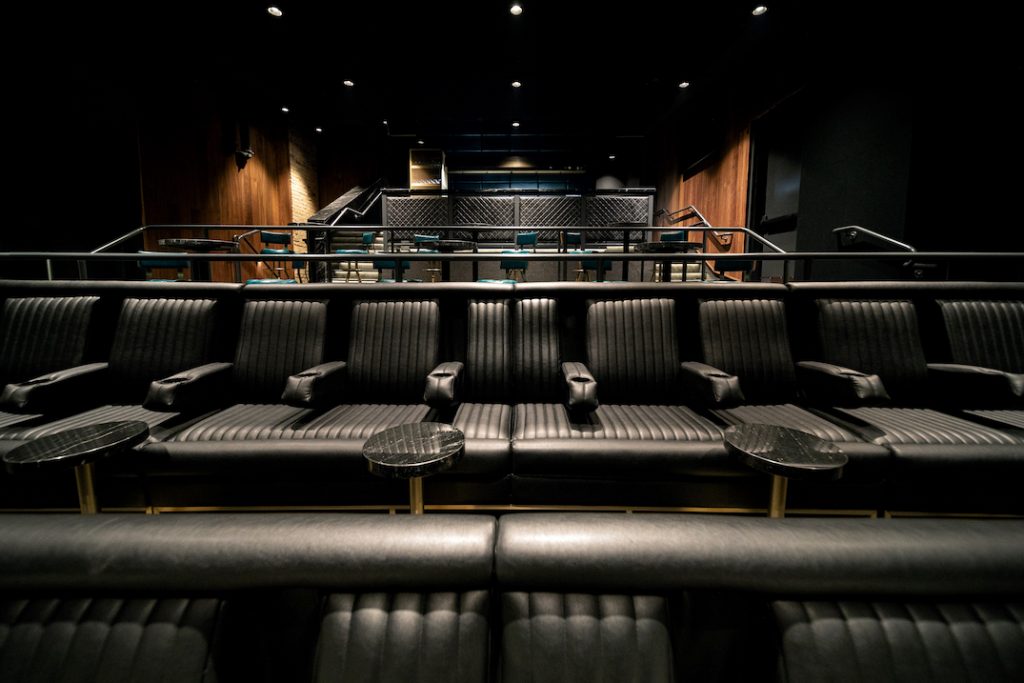 Some of the titles we can expect at Paradise are Mean Girls, Young Frankenstein, Hedwig and the Angry Inch, Blues Brothers, Waiting for Guffman, Elf, Innerspace and Love Gilda, which is about Gilda Radner.

As for music, Jason Collett will host his Basement Revue show, which had previously been housed at the Dakota Tavern.  The variety show brings in “very cool musicians, journalists, spoken word performance artists, and others” said Smith. “And he doesn’t announce at all, basically you walk up knowing you are in for a great night without knowing who is performing–and the other acts don’t know who is on the bill either.”

There will also be “Second City at 60” selections to celebrate Second City turning 60 this December, as well as themed series like “7 from ’37,” which features seven films from 1937, the year the cinema came to be. The Awful Truth featuring Cary Grant and Irene Dunne is one of  the films on deck.

As part of the soft launch, Toronto poet Gianna Patriarca will be reading “We Remain” for a video about the history of Paradise Theatre. The poem recounts Patriarca’s memories in the 60s – 70s when it was an Italian filmhouse.

“We want people to revisit a classic alongside discovering a film for the first time, even if it is 50 years old. There’s something unparalleled about that in-theatre experience, which translates to others arts too, like going to a gallery,” said Smith. “There’s something about that experience that stays with you.”

Paradise Theatre’s programming is online as of November 27, at 5 pm.

*Prices and selections may be subject to change so don’t yell at us if they do.