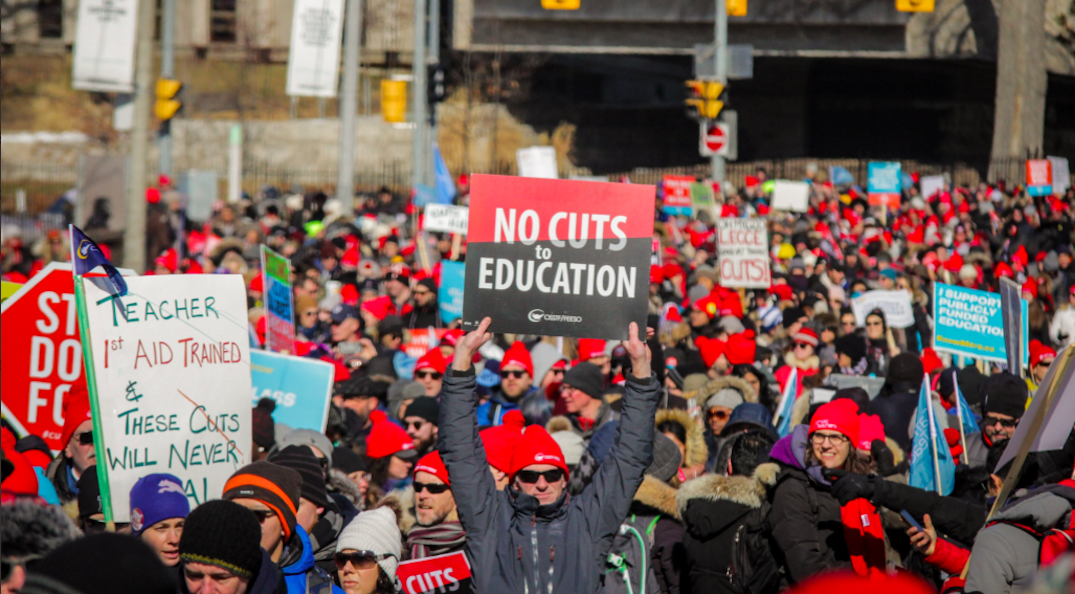 Protestors during the Queen's Park demonstration on Feb. 21. (Ian Lawrence/Twitter)

Some Ontario teachers are planning a second province-wide demonstration at the legislature on Thursday, March 5.

All teachers in publicly funded Catholic district school boards across Ontario will be on strike and certain schools, including the Toronto District School Board, will be striking with OSSTF.

OECTA declared the strike after a resolution between the teacher union and the province could not be reached, while OSSTF has not been on the bargaining table with the province since December 16, 2019.

On February 29, the AEFO said they would join the strike after “very little progress” was made at the bargaining table with the province.

“Enough is enough,” Stephen Lecce, Minister of Education said in a press conference on Tuesday. “The government has been reasonable and the union has not made moves to reciprocate.”

Lecce said the government has agreed to not increase classroom size for the new school year in the fall and that a 1% increase for compensation has been agreed upon.

“The unions have known about this plan for weeks but have not agreed because they want a considerable enhancement to their benefits package and want hiring practices based on seniority and not merit,” Lecce said.

When it comes to e-learning, Lecce said it’s up to parents, not the unions, to decide if students should take the online classes, which offer more STEM and digital literacy courses.

The Minister of Education called on teachers to “cease strike escalation” with this deal in mind and to provide “predictability for parents.”

According to Liz Stuart, President of OECTA, the union has  informed the mediator that negotiations can resume on Wednesday and can continue to bargain on Thursday and Friday if the discussions are productive.

“Despite constantly claiming they are available 24/7, and their priority is to keep students in class, the government has yet to accept our offer,” Stuart said in a statement.

“Catholic teachers are fed up with this government’s games and spin. While our preference has always been to keep details of negotiations at the bargaining table, the repeated misrepresentations by Premier Ford, Minister Lecce, and other members of this government are undermining the bargaining process,” she said.

The Elementary Teachers’ Federation of Ontario (ETFO) is not engaging in any strikes this week, but said that if contract deals are not made by March 6, then they will begin a new phase of strikes effective Monday.

“The Ford government has planned to cut 10,000 teachers, decreased per pupil funding, refused to provide adequate funding for students with exceptionalities and avoided bargaining in good faith with the province’s educators. They clearly care very little for public education and the students it serves.”

The second province-wide strike comes directly after the first walkout on February 21, which saw 200,000 teachers representing the four major unions strike. This represented that largest strike since the mass teacher walkouts in 1997.