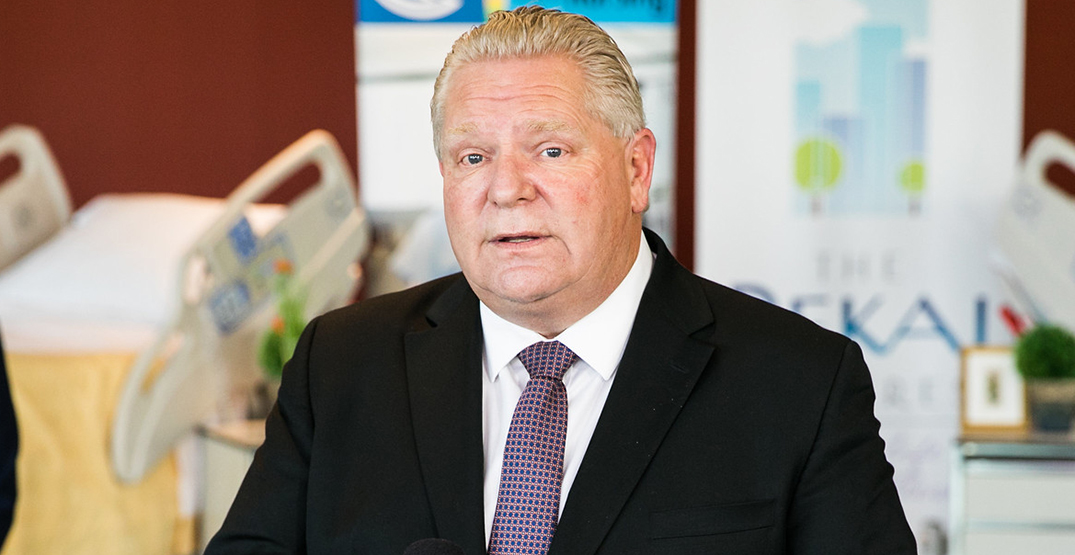 This comes nearly a week after he declared a province-wide shutdown, which some public health experts said was too weak to fight the growing third wave of COVID-19 infections.

The Stay-at-Home order will begin at 12:01 am Thursday and last for four weeks.

Ford declared the State of Emergency in order to give his government the power to impose a legal Stay-at-home order.

People should stay home except to go to work, exercise, shop for essentials, or attend medical appointments for its duration.

Employers should also ensure that all employees who can work from home do.

Grocery stores and pharmacies can remain open for in-person shopping. All other non-essential retailers must close to customers. They can still be open for curbside pickup between 7 am and 8 pm, and delivery between 6 am and 9 pm.

Shopping malls can only be open to facilitate curbside pickup by appointment.

The new order comes as COVID-19 infections surge, and hospitalizations hit ICU admissions hit their highest point in the pandemic so far, crossing the 500 thresholds on Tuesday. Top doctors for Toronto, Peel, and Ottawa called on the province to implement the order to prevent hospitals from being overloaded.

“I promise you better days are ahead of us,” Ford said at a news conference Wednesday. He hopes to have 40% of Ontario adults vaccinated by the time the Stay-at-Home order ends in four weeks.

Previous to this, Ontario was in a shutdown, where most of the province was under restrictions similar to the lockdowns in Toronto and Peel that have been in effect since November.

Health Minister Christine Elliott previously said last week that Ontario initially chose a shutdown instead of the second Stay-at-Home order because of the “tremendous ill effect” it had on both children and adults.

Ontario’s first Stay-at-Home order came into effect on January 14 after a spike in cases following holiday gatherings. This is also the province’s third COVID-19-related state of emergency.

Earlier this week, Toronto and Peel ordered schools shut for two weeks to slow COVID-19 spread as variants of concern send younger people to the hospital.

Ontario has seen case counts near or above 3,000 for six straight days now, reporting 3,215 on Wednesday, bringing the total number of cases since the pandemic began to 370,817.

At the same time, Ontario is rushing to vaccinate citizens, hoping immunization will cut down on new infections. About 2.7 million doses have been administered so far.

Torontonians age 60 and up are eligible to book a vaccine, Peel residents 50 and up can book one starting Friday, and York Region has opened up eligibility to people as young as 45 in certain hard-hit neighbourhoods.

This story is developing…