With the possibility of Roe v. Wade being overturned in the US, it’s no surprise that Canadians are asking if abortion might be banned here.

Abortion was decriminalized in Canada in 1982. Since then, politicians have made frequent attempts to roll back access to abortions in Canada.

Ontario political party leaders are officially out on the campaign trail ahead of the June 2 election. Not surprisingly, all four have had to make their stand on abortion in the province clear. 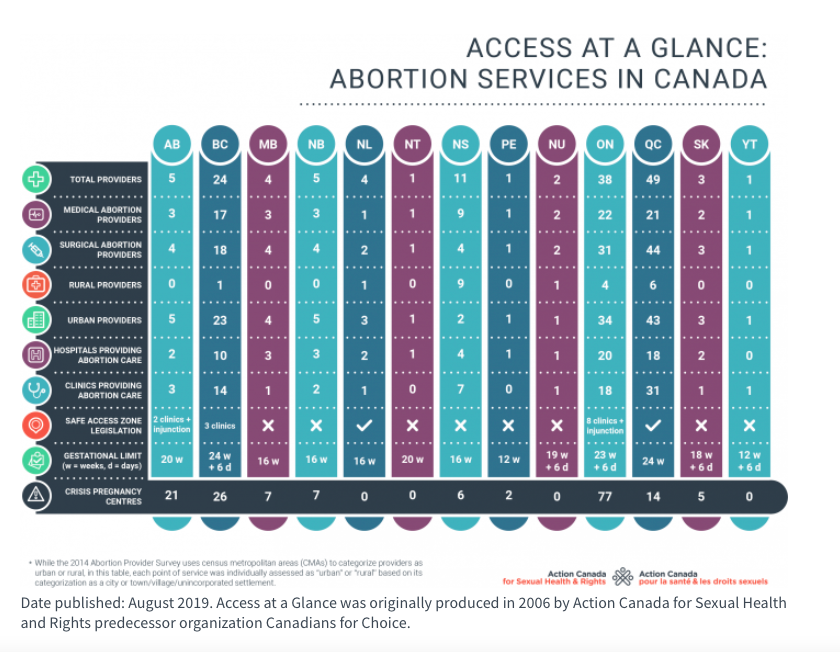 Doug Ford, Leader of the Progressive Conservatives, said that he would make zero changes to abortion in the province if re-elected.

“We’re not changing anything in Ontario. We’re keeping it exactly the same,” Ford said at a press conference on Wednesday.

Depending on where you live in the province, this could be unwelcome news. Access to abortion is extremely limited outside of the southern region. Abortion providers are only located in urban centres, despite the province having a large rural population.

Ford has come under fire for PC candidate Sam Oosterhoff’s comments that he wants to make abortion “unthinkable in our lifetime.” The comment was made in 2019, and in 2021 he spoke at an event held by a group that compared abortions to the holocaust. He was a sitting MPP at the time of both incidents and was involved in re-writing Ontario’s sexual education curriculum.

A list of Ontario abortion providers, and the specific services they provide, can be found here.

Liberal leader Steven Del Duca has pledged to invest millions in “women’s health.” While the policy announcement doesn’t mention the word abortion at all, Del Duca said that some of the $20 million earmarked for “women’s health” will go towards abortion services.

“These are rights that cannot be taken for granted. They are frail. There are always those in society who are prepared to try to move us backwards in this regard,” Del Duca said.

He said that under a Liberal government, abortion access would be expanded. While he pledges to expand access, he has come under fire for continuing to commit funding to catholic schools in the province despite anti-abortion teachings and assignments.

Ontario NDP leader Andrea Horwath put out an official statement condemning the draft opinion on Roe v. Wade the day after the news broke. She said that if elected, she would expand abortion services to more northern and rural areas of the province.

“Every woman, every person that needs abortion services should be able to get those services without any worries, without any trouble and without any lengthy waits that would prevent them from having a safe procedure,” Horwath said.

Women’s rights are always at risk. I don’t want the next generation to have to fight the same battles our moms and grandmothers did.

Let’s expand access to family planning — like making all birth control free — not roll it back. #ONpoli #RoeVWade pic.twitter.com/HcWx1W4RkL

Green leader Mike Schreiner also condemned the draft opinion on Roe v. Wade. He acknowledged that while decriminalized, access to abortion in the province keeps a lot of hurdles in place.

“In particular, in northern, remote and rural communities, women often have to travel long distances for access to these clinics,” Schreiner tweeted.

He committed to providing funding for abortion clinics in the province if elected.

Ontario Greens understand how important standing up for women’s rights is.

That’s why we are committing funding in our costed platform to expand the number of women’s health clinics & abortion clinics in Ontario. 2/3#onpoli #WomensHealth