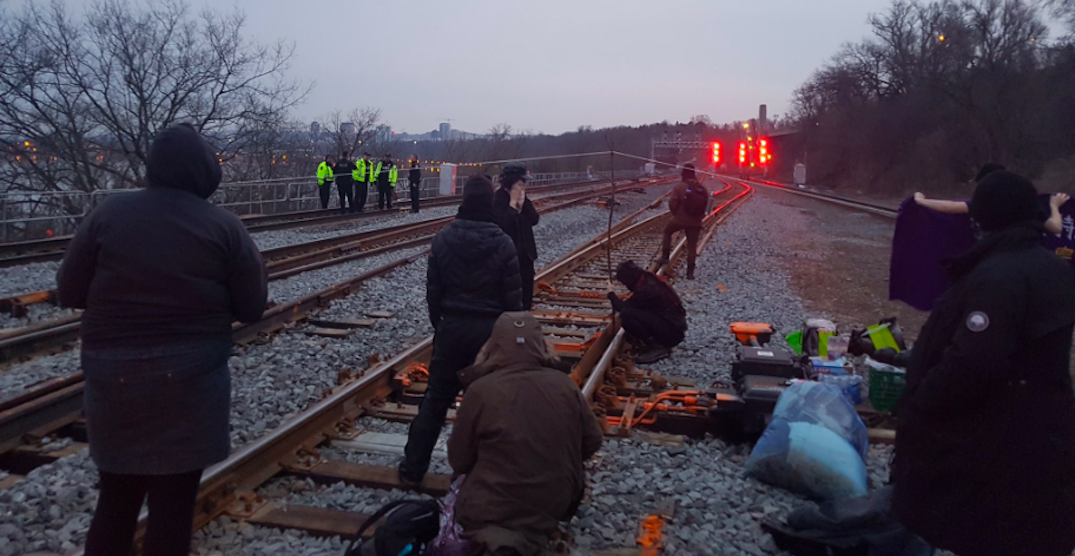 Blockade at Hamilton on Feb. 24 / Rising Tide Toronto via Twitter

The Ontario Provincial Police (OPP) are reporting that 10 protesters were arrested and charged at the Mohawk blockade adjacent to a railway in Tyendinaga outside Belleville on February 24.

All 10 people were charged under the criminal code with mischief — damaging property — and for disobeying the injunction filed against them on February 7.

Three if the individuals were also charged with resisting arrest and one was charged with obstructing a police officer.

All were released on conditions, with a scheduled court date in March at the Ontario Court of Justice in Napanee, a spokesperson from the OPP told Daily Hive.

The arrests sparked another solidarity protest in Hamilton. Around 5 pm on Monday, a blockade north of Hamilton cemetery stopped rail traffic going in and out of the city including freight and passenger trains, according to posts on Twitter by Rising Tide Toronto — a grassroots environmental organization.

Since 5pm a blockade north of Hamilton cemetery is stopping all rail traffic going in & out of Hamilton, including freight & passenger trains. This was set up in response to the OPP raid on Tyendinaga this morning. Join> https://t.co/tnRcqQ9Hvc#ShutDownCanada #WetsuwetenStrong pic.twitter.com/IiMTVpizjI

As a result, GO Transit cancelled some train service on Tuesday morning. The Aldershot GO and Hamilton GO services were modified to adjust to the police investigation happening along the route because of the blockade.

Lakeshore West #GOtrain passengers: As a result of the ongoing police investigation along the tracks between Aldershot GO and Hamilton GO, service on your line will be modified this morning. Please see https://t.co/bDWzFhfee3 for travel options.

The arrests were made because of an injunction filed on several weeks ago, against the solidarity protestors for blocking the railway. The OPP went into the territory Monday morning to remove the protestors, who are supporting the Wet’suwet’en hereditary chiefs in British Columbia.

Earlier on Monday morning, a statement was released by the Mohawk community in Tyendinaga, asking that the OPP refrain from the use of force and allow for a peaceful resolution.