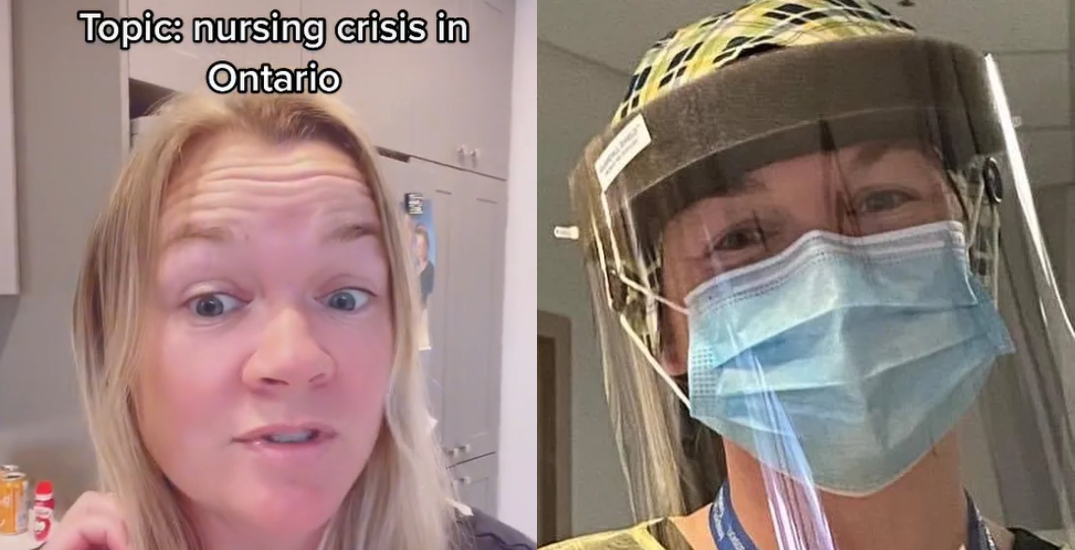 Ontario’s health system is in a full-blown crisis. If you’re a mad, overworked, and underpaid nurse, join the club.

Christie Cowan, a registered nurse in Ottawa, told Daily Hive that a lack of primary care and incentives, in addition to poor staffing, have been an issue for as long as she can remember.

Cowan has worked in the industry for 14 years now. She used to work 12-hour shifts in the ICU, where she had seen and done it all. When that became too much emotionally, she decided to pivot and now specializes in wounds and ostomies.

Cowan revealed to Daily Hive this past year has been mentally draining for her. Like a lot of other nurses, she had a hard time coping with the uncertainty of everything. Cowan had to take a leave from work, enrolled in therapy, and began taking antidepressants.

“I never thought this would happen to me. I’m very outgoing, confident and had always been able to cope with stress really well,” she said. “I was having a hard time getting out of bed and shut down socially.”

Cowan, who is also a host of the Beyond the Bedpan podcast, has been sharing her experiences in healthcare and voicing her opinions on social media where she built quite a big following.

This province voted in @fordnation knowing he wouldn’t be available in crisis. I’m so mad at #ontario https://t.co/ikNNbBlzD3

At times, though, she said feels like she’s screaming at a brick wall.

For every minute people spend on the phone to airlines you should spend 30 seconds advocating for your healthcare system. You’ll be fine without your flip flops in Barcelona but you won’t be fine with closed ERs @fordnation #ontario @AirCanada #Ontario #onpoli

Cowan explained that launching her podcast and increasing her social media presence helped her connect with other nurses and healthcare professionals across the country. She continues to to advocate tirelessly for the nursing profession.

“Ontario seems to be in a reactive state of mind and not a prevention state of mind. Until this changes, it won’t get better,” she told Daily Hive.

On August 3, we reported that half of Ontario nurses are considering leaving the profession for good. Cowan herself said she considered quitting many times over the last 14 years, but it’s easier said than done.

“To leave the profession completely leaves you with little options if you aren’t at a point in your life where you can go back to school easily for a new degree,” she said.

In the last 18 hours I’ve had 2 nurses tell me they just handed in their resignation letter. I’m proud of them! The #ontario healthcare crisis is going to get worse before it gets better #onpoli #RepealBill124 #Ottawa @fordnation @SylviaJonesMPP

So what can be done to restore the quality of healthcare in Ontario?

In Cowan’s eyes, repealing Bill 124 is the first of many steps the government must take. This bill currently limits Ontario nurses’ annual salary increases at just 1%.

“Caping wages of female-dominated professions shows a lack of respect and makes us feel undervalued. Repealing the bill allows our union to bargain for a pay raise,” Cowan said.

In various TikToks, Cowan has stated that to avoid further burnout, Ontario nurses will start to set boundaries for themselves. “We’ll start to see nurses only taking on the workload that they can handle,” she said.

Now that she’s in a different role in her career, Cowan is working better hours and spending  more time with her family.

A privilege not every Ontario nurse is afforded.