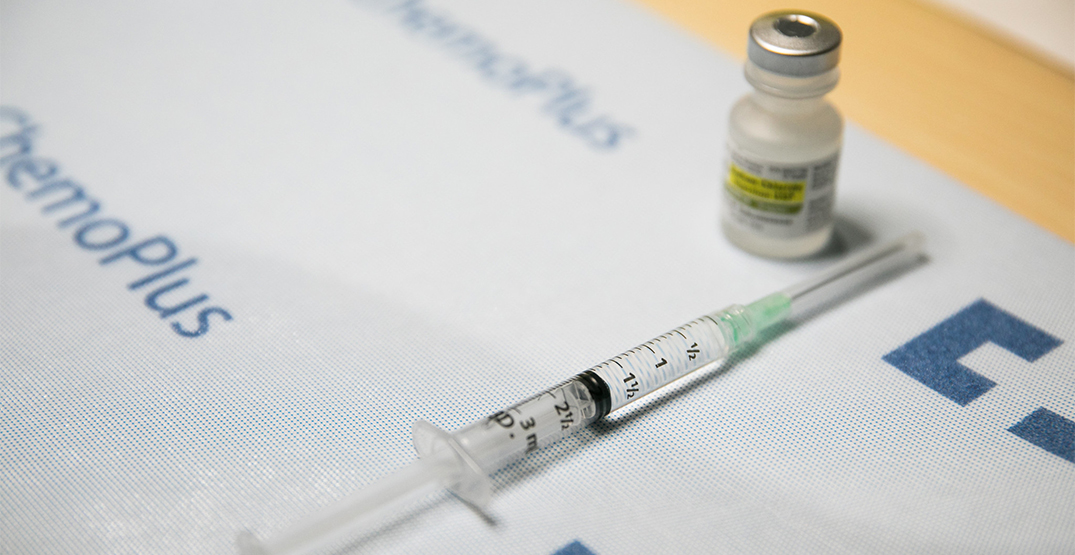 A COVID-19 vaccine at University of Heath Network’s Michener Institute of Education. (Premier of Ontario Photography)

Ontario plans to ramp up its vaccination campaign this month by increasing the pace of immunization and focusing on workers and residents of neighbourhoods hardest hit by the virus.

Officials gave an update Tuesday on the immunization strategy so far and plans going forward to prevent deaths, reduce hospital and ICU admissions, and stifle transmission.

Essential workers who can’t work from home can now expect to receive their first dose in mid-May, which is earlier than the province’s last estimate. 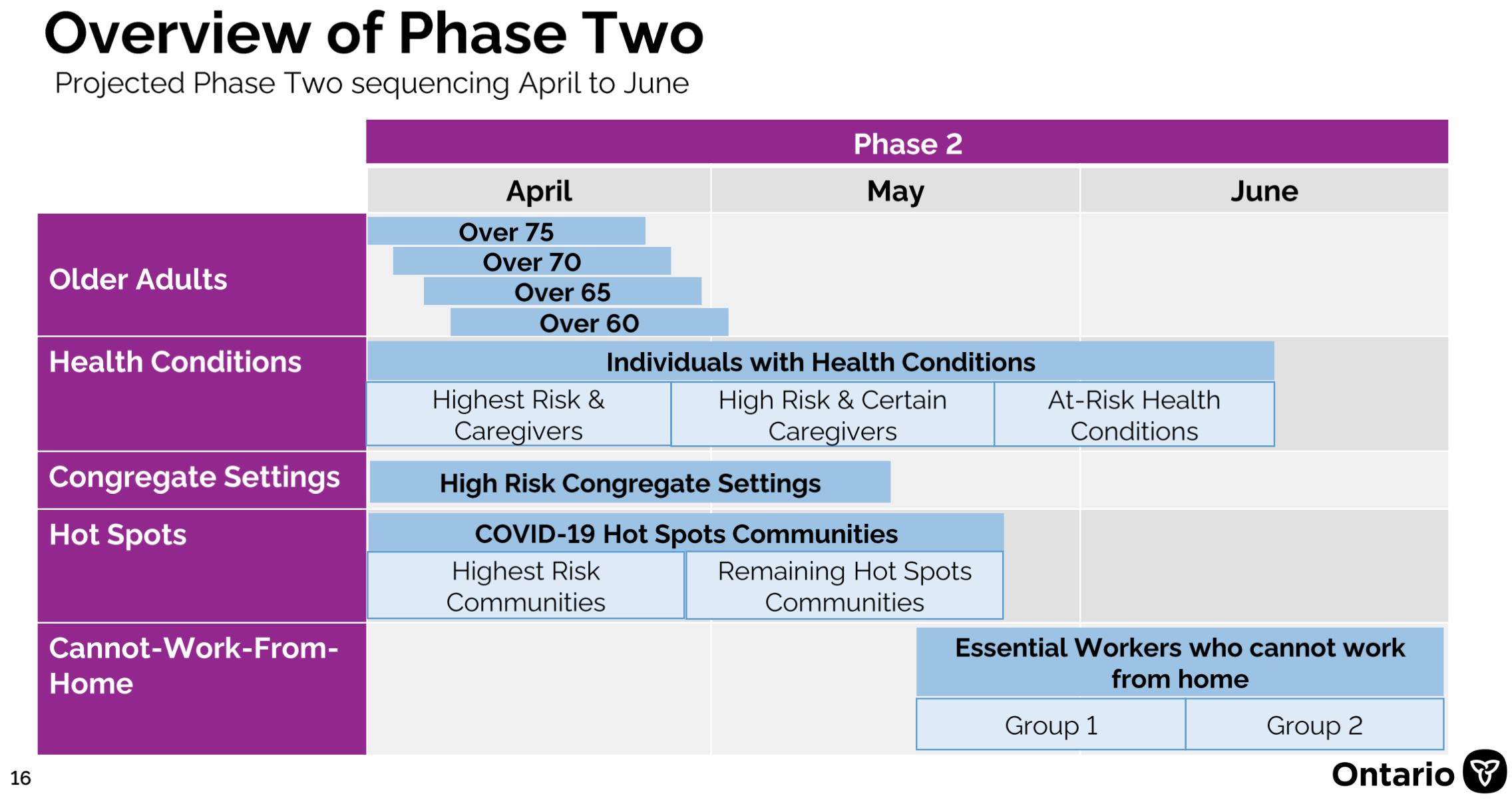 So far more than 2.6 million doses of COVID-19 vaccine have been administered, and 322,000 Ontarians have now received two doses. 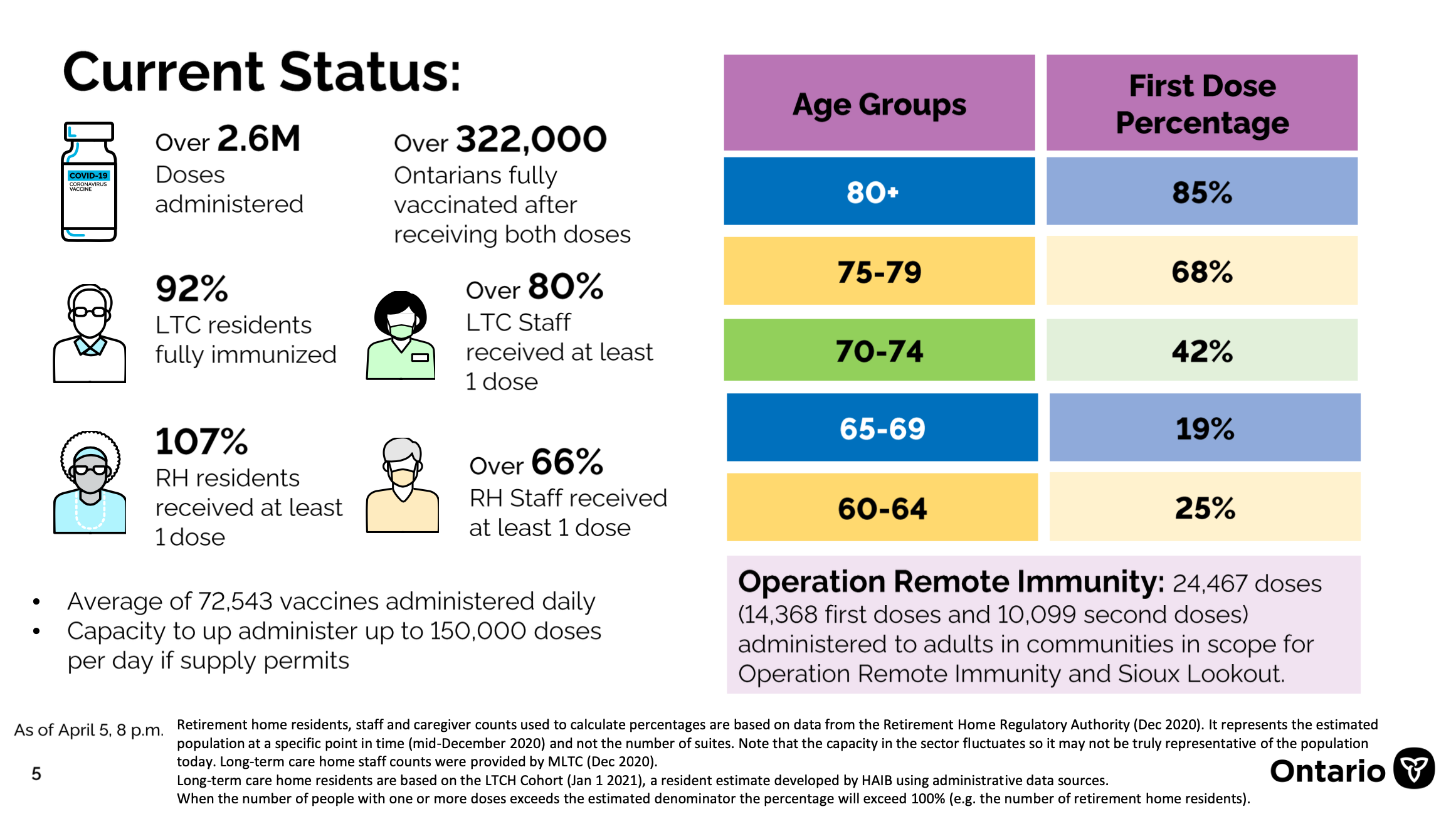 On April 7, all of Ontario’s public health units will begin offering vaccine appointments for all residents aged 60 and up.

Once federal supply ramps up, the province has capacity to administer 150,000 doses per day.

Local health authorities have approved plans to operate more than 300 vaccination sites by the end of April including hospitals, mass vaccination clinics, mobile clinics, and through primary care providers.

Ontario has a target of giving 100,000 shots per day by the end of April. By the end of the month, Ontario anticipates administering a total of four million doses.

More pharmacies are also being brought on board to help administer vaccine, and Ontario expects to have 1,500 of them offering COVID-19 immunization by the end of April.

Many retail pharmacies are administering the AstraZeneca vaccine to people age 55 and older while Health Canada reviews data about blood clots in younger individuals following immunization. Ontario received nearly 200,00 doses of AstraZeneca vaccine with an expiry date of April 2, and all of those doses were administered before expiry.

Another half a million AstraZeneca doses are going to pharmacies around the province, and the pharmacies started administering them on April 3.

These values are over 100% because in some cases pharmacists are able to draw an additional dose from the AstraZeneca vaccine vial. (Government of Ontario)

Primary care providers are sometimes trying to reach patients who face more challenges to get their vaccine, and as such have been given doses with later expiry dates, health officials said at a technical briefing Tuesday. Pharmacies, on the other hand, usually have their doses used up quickly as residents proactively book appointments. 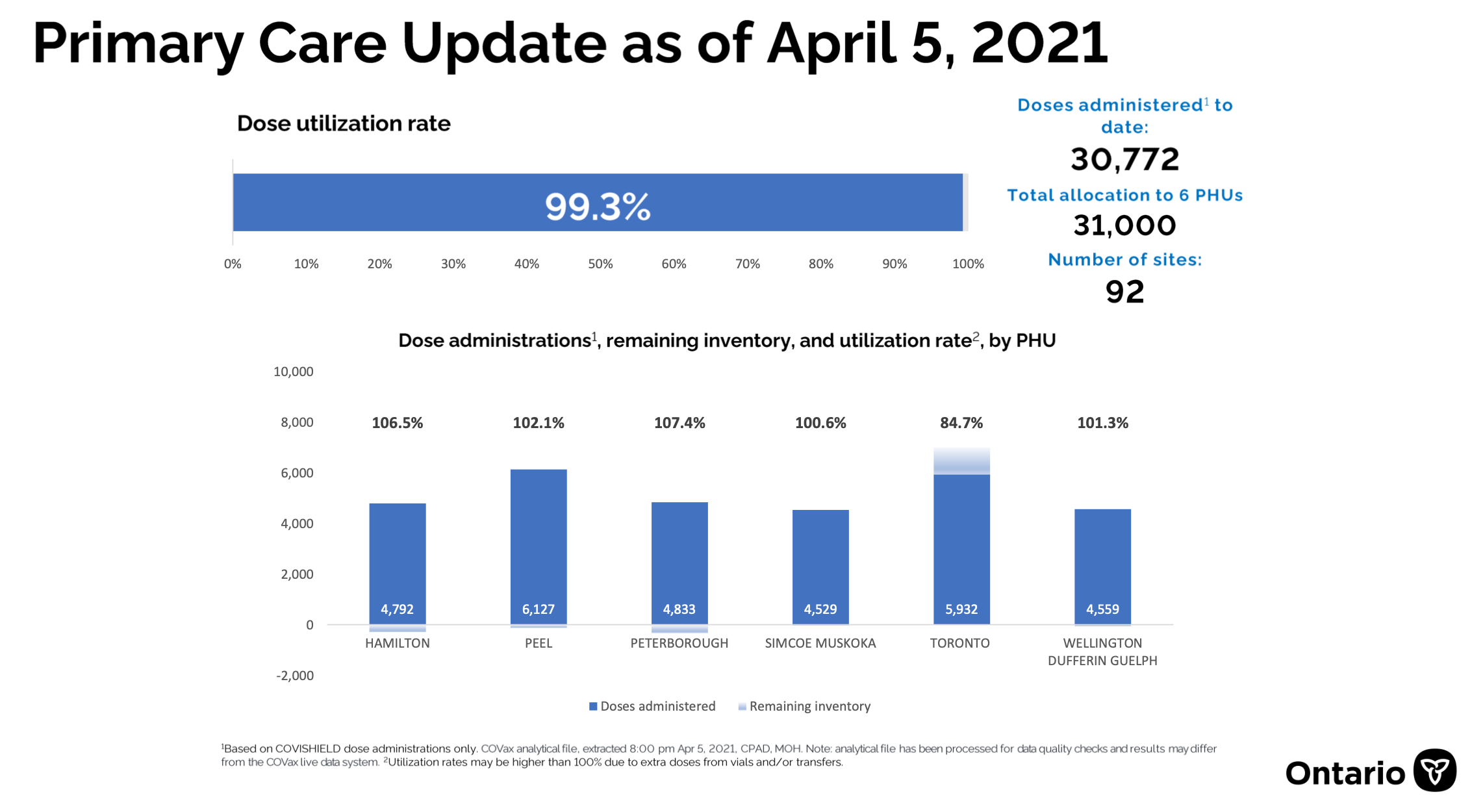 So far the provincial online booking system has slotted in 1.29 million first and second vaccine appointments. That’s in addition to appointments scheduled through primary care providers and pharmacies.

While most Ontarians will receive their two doses four months apart, some individuals who are more vulnerable to the virus will receive their doses only a few weeks apart as per manufacturer recommendations. Those people include long-term care residents, Indigenous individuals, transplant recipients, and those with some other medical conditions.

Hotspots being prioritized in Phase 2

Ontario plans to move to Phase 2 of its immunization strategy in April, when people will receive vaccine based on risk factors such as needing to go to work in person or underlying health conditions, rather than just based on age.

Certain “hotspot” neighbourhoods that are disproportionately affected will also be targeted for vaccination, officials said.

Adults age 50 or over in these hotspot communities across 13 public health units will be prioritized during Phase 2. Certain postal codes have been identified in Durham, Halton, Hamilton, Niagara, Ottawa, Peel, Simcoe-Muskoka, Southwestern, Toronto, Waterloo, Wellington-Dufferin-Guelph, Windsor-Essex, and York Region.

Officials say there are between two to three million people living in these highest-risk postal codes, and they may have overlapping risk factors that make them eligible earlier for the vaccine such as their age or being an essential worker. 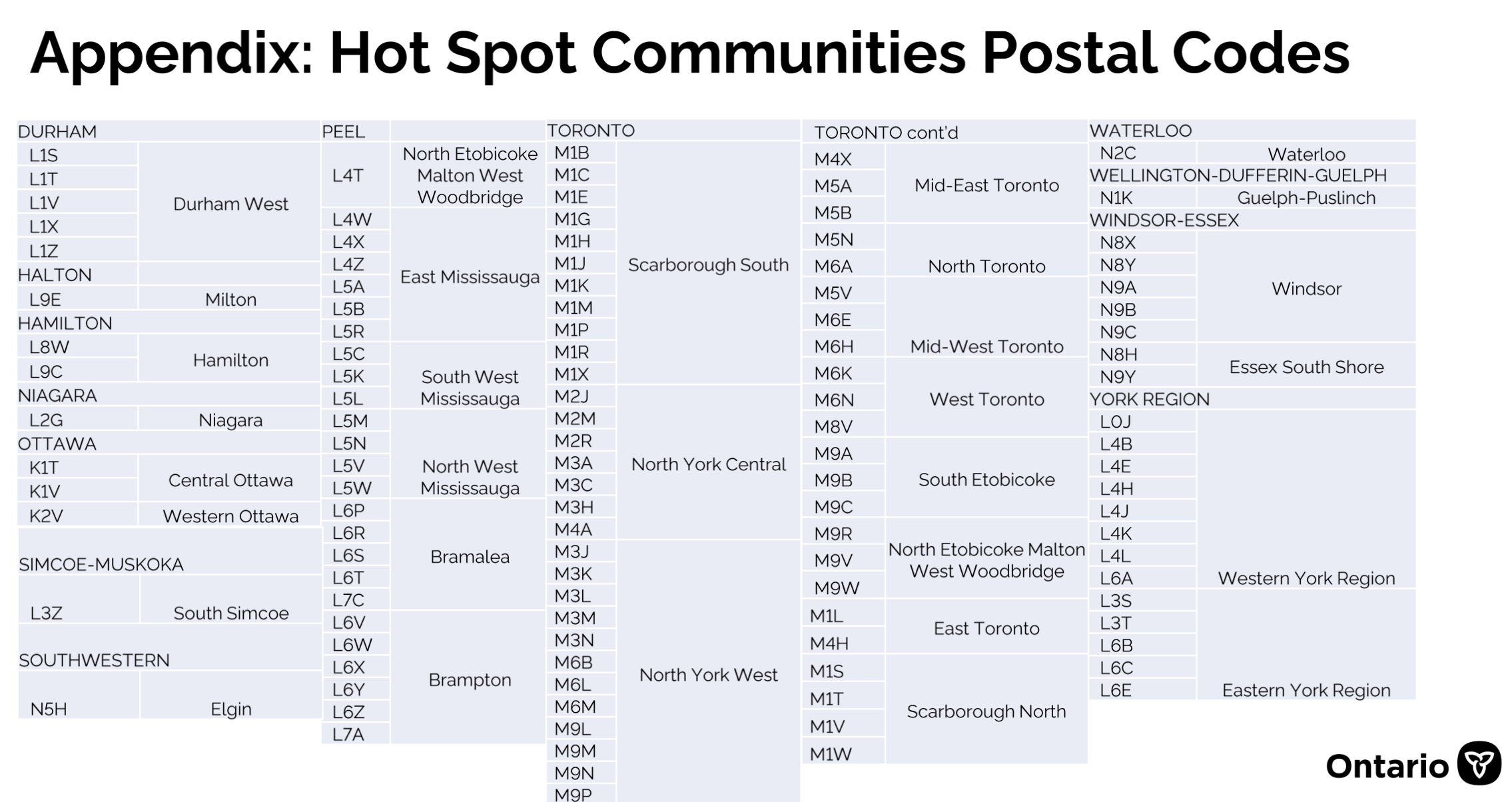 The province is also funding community outreach in these neighbourhoods to facilitate vaccination.

Officials also said Ontario’s most populous regions may need a tweak in their vaccine strategy as appointments go unfilled. Officials said they are working with local health authorities for Toronto, Peel, and Hamilton to understand why vaccine appointment uptake isn’t as high compared to less densely populated areas.

Ultimately, the province hopes to refine vaccine delivery strategy to get the most vulnerable immunized as soon as possible with its limited vaccine supply.