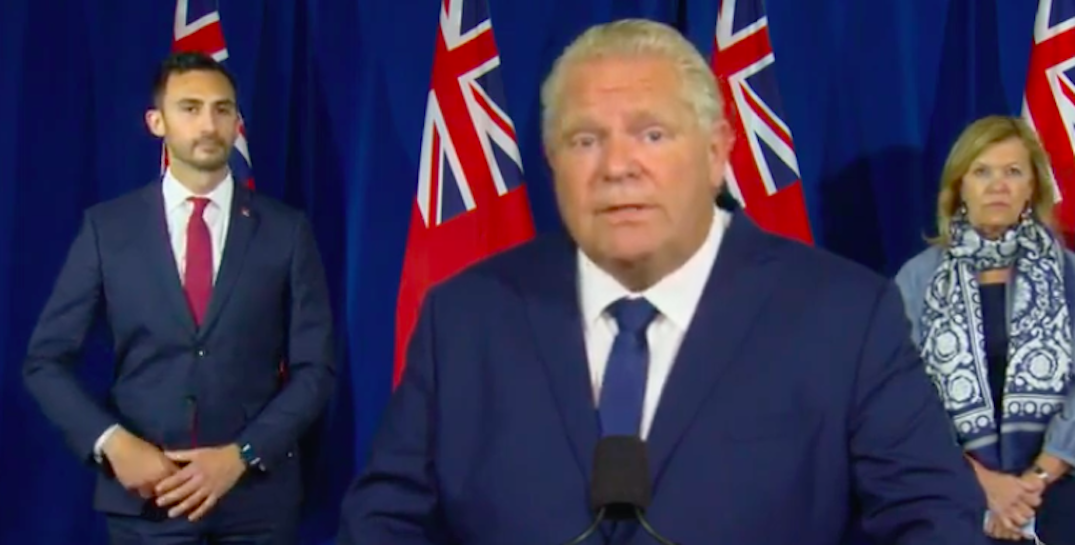 Ontario will limit social gatherings to 10 people indoors and 25 people outdoors in Toronto, Peel and Ottawa to help stop the spread of COVID-19.

The order will be effective on Friday.

The premier noted that these gatherings include parties in backyards, at BBQ’s, and parks but not restaurants.

“We will throw the book at you” Ford warned during the press conference on Thursday.

Currently, the limits are 50 indoors and 100 outdoors.

When asking why the same doesn’t apply for weddings, Ford said that event venues and banquet hall have strict guidelines in place, which is different than “a free for all party.”

To support better compliance with public health guidelines, the province made amendments to the Reopening Ontario (A Flexible Response to COVID-19) Act, if passed, would impose fines of a minimum of $10,000 to a maximum amount of $100,000 for those hosting these social gatherings and $750 for people attending the events.

The new limits will not apply to events or gatherings held in staffed businesses and facilities, such as bars, restaurants, cinemas, convention centres or banquet halls, gyms, and recreational sporting or performing art events.

“Existing rules, including public health and workplace safety measures, for these businesses and facilities continue to be in effect,” the province states.

The premier said that he will not direct the police but with the new bylaws in place, the police will work to act accordingly to enforce the new regulations.

Ford also said that repeat offenders will not be charged more than once, but they will repeatedly be given the fine and go to the courts, where “the courts will decide.”

“We have been working hand-in-hand with our medical officials and our mayors to try and slow down and limit new cases in the regions with the highest rates of transmission,” Health Minister Christine Elliott said.

“This targeted action is in direct response to the latest data, which tells us that increased cases are the result of private and social gatherings. By limiting the number of people permitted at a social gathering in these regions, we will reduce the spread of COVID-19 and keep people safe.”

In Ontario, coronavirus cases have been increasing, with Wednesday’s 315 being the highest reported numbers since early June.

The province reported 85 cases from Toronto, 63 from Peel, 39 from Ottawa, and 37 from York Region on Thursday.