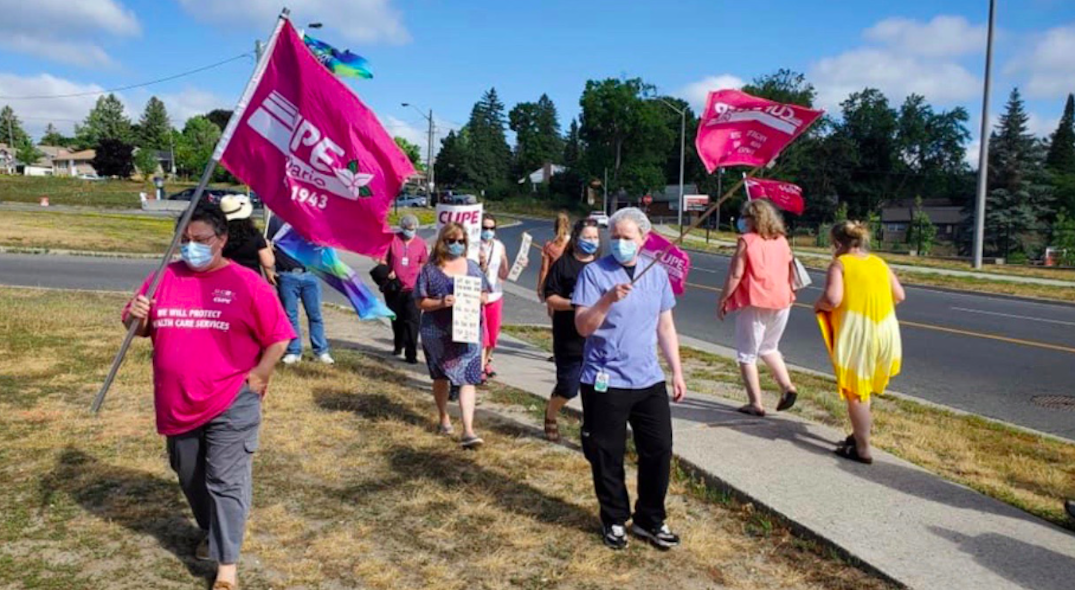 Protesting Bill 195 in Oshawa and Peterborough on July 17. (Ontario Council of Hospital Unions/Twitter)

Frontline hospital staff in Ontario are planning a five-minute protest Tuesday morning to fight the proposed extensions of the province’s emergency orders.

The Ontario Council of Hospital Unions have organized the in-hospital protest to take place at 11 am in order to speak out against the extension of the emergency orders which the union says suspends their collective bargaining agreement.

According to the hospital union, Bill 195 allows vacations to be cancelled, shifts to be changed — from days to nights for example, jobs can be eliminated with the worker reassigned with no say, hours of work can be changed, leave of absence can be denied, worker can be moved to another site, and contractors or volunteers can be brought in to do work and replace hospital staff jobs.

“Stripping the contract rights of dedicated health care workers, who have sacrificed so much during this pandemic including being with their families and friends to shield them from infection, has consequences for this government,” Michael Hurley, Union President, said in a statement.

“This is picking unnecessary conflict with a loyal workforce. The Premier and his ministers are creating instability just as the province is reopening. We encourage them to reconsider taking away health care workers’ rights.”

On July 7, Ford’s government introduced legislation that would extend some emergency orders for up to a year, and if passed, would give the province the flexibility to address the ongoing risks and effects of the pandemic.