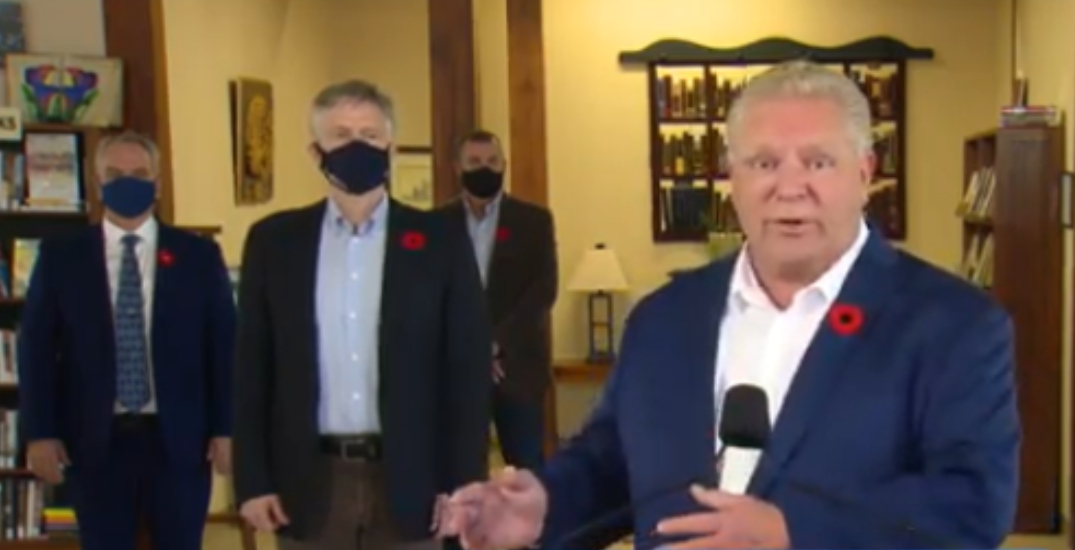 The Ontario government announced a new investment of nearly $1 billion over six years to improve and expand broadband and cellular access in the province.

Ontario Premier Doug Ford announced the investment at a press conference in Minden Hills on Wednesday.

The $680 million being made available today is on top of the $315 million to support Up to Speed: Ontario’s Broadband and Cellular Action Plan.

This funding will be used for projects starting in 2019-20, will create jobs, and connect unserved and underserved communities during COVID-19 and beyond, according to a press release from the province.

Details of the investment were provided ahead of the release of Ontario’s 2020 Budget by Ford, along with Rod Phillips, the Minister of Finance, Laurie Scott, the Minister of Infrastructure and MPP for Haliburton—Kawartha Lakes—Brock, and Peter Bethlenfalvy, the President of the Treasury Board, at the local Haliburton County Public Library in Minden Hills.

“By providing high-speed broadband to unserved and underserved communities like Minden Hills, we will create good jobs, unlock new opportunities for businesses and people, and improve the quality of life for individuals and families,” said Ford.

“With the world online these days, if we are going to attract more investment to Ontario and compete in this highly competitive global marketplace, we need every part of our province connected with high-speed Internet.”

The investment doubles funding for the Improving Connectivity in Ontario (ICON) program, bringing the new total to $300 million, according to the release. The government says this program now has the potential to leverage more than $900 million in total partner funding to improve connectivity in areas of need across Ontario.

As part of Ontario’s broadband and cellular action plan, ICON is one of several provincial initiatives underway to improve connectivity across Northern, Eastern, and Southwestern Ontario.

“The first pillar of this action plan is Protect, making good on Premier Ford’s commitment to do whatever it takes to get through the pandemic. The second pillar is Support, because we know COVID-19 has brought severe challenges and economic difficulties to families and employers across the province. The third pillar is Recover and includes today’s historic investment in broadband. Through initiatives like this our government is laying the foundation for a strong economic recovery and a successful future.”

Over 1.4 million people in Ontario do not have broadband or cellular access, and as many as 12% of households in Ontario, mostly in rural, remote, or Northern areas, are underserved or unserved from the perspective of broadband, according to Canadian Radio-television and Telecommunications Commission (CRTC) data.

In October, the province released Ontario Onwards: Ontario’s COVID-19 Action Plan for a People-Focused Government. Improving access to broadband and cellular service is one of the initial projects. Through Ontario Onwards, the province plans to help make government services more efficient and the lives of people and businesses better.

Building on Ontario’s Action Plan: Responding to COVID-19, the province’s $30 billion response to the pandemic, the government remains committed to making available the necessary resources to protect people’s health, and support people and employers, they say.

Ontario will release the 2020 Budget and the next phase of Ontario’s Action Plan tomorrow.