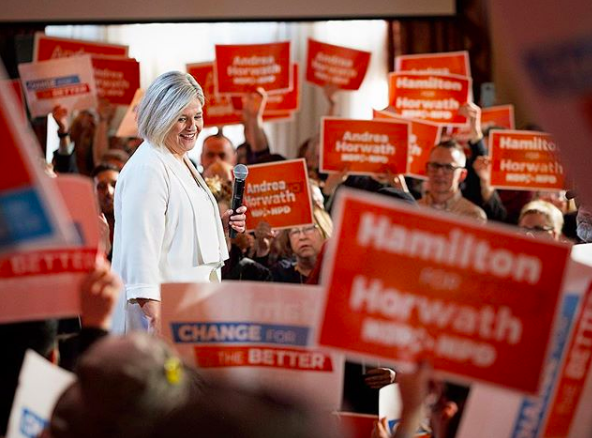 As we say goodbye to April, we can expect the candidates of the Ontario election – held on Thursday, June 7 – to increasingly dominate headlines as they take their campaigns to the next level.

If you’re in the dark about the Ontario election (and too embarrassed to admit it at this point), you can find all you need to know here, as well as a 101 on the Liberal Party, Progressive Conservative Party (PC), and the New Democratic Party (NDP). You can catch up on our last weekly update here.

A new poll by Mainstreet Research suggests that Doug Ford will likely become the new Premier of Ontario (with 44.9% of voter support), but that the Liberals and NDP had gained some traction among voters, with the Liberals now at 28.2%.

Yesterday (April 30), the Liberals highlighted a video of Ford from February where he told developers he would open a portion of the Greenbelt for new housing. He also announced plans to invest $1.9 billion dollars over nine years in mental health.

Over the weekend, Ford announced a new tax rebate for up to three-quarters of childcare costs for working parents that will help cover childcare costs regardless whether parents opt for a licensed daycare, a nanny or babysitter, or an after-school program.

On April 27, Ford promised to cut hydro bills by 12% if elected, saving the average family $173 per year. He said he would accomplish this by returning all Hydro One dividends to Ontario families, stopping “the Liberal practice of burying the price tag for conservation programs on your hydro bills,” and cancelling Liberal energy projects that are in the pre-construction phase.

Last week, Ford pledged to release a full financial plan for the province before the election; so far, he has yet to outline the cost of his policy announcements.

In response to a report by the Auditor General that revealed that the Liberal government understated the deficit by billions of dollars, last week, Ford also promised an inquiry into Ontario government spending.

On Friday (April 27), Wynne hit Hamilton and spoke before an audience at the Ontario Chamber of Commerce annual general meeting, where she made her case for re-election on competitor Horwath’s home turf.

Last week, Auditor General Bonnie Lysyk called Wynne and the Ontario Liberals out, claiming that their numbers simply don’t add up and that the government understated their deficit by millions.

On Sunday, Horwath officially kicked off her campaign (the largest in the party’s history) with a launch in Hamilton.

On Friday (April 27), Horwath took to Twitter to promise to lower hydro rates by 30% for everyone.

On Friday, Horwath slammed Ford, stating that he “stands proudly for a privatized hydro system that places profits for wealthy shareholders ahead of lower hydro bills,” promising to bring Hydro One “back in to public hands where it belongs.”