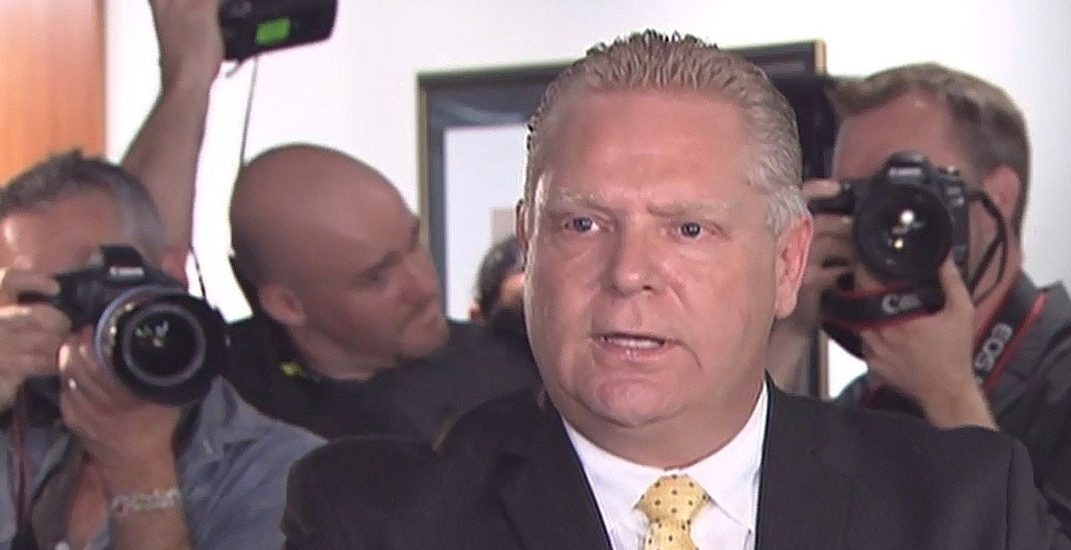 Things are starting to turn ugly and heated in the Ontario election, as Election Day – Thursday, June 7 – looms closer, now approximately one (surely eventful) month away.

With the first of three debates of election season this evening (6 pm on CityNews), it may help if you’re up to speed. If you’re in the dark about the Ontario provincial election (and too embarrassed to admit it at this point), you can find all you need to know here, as well as a 101 on the Liberal Party, Progressive Conservative Party (PC), and the New Democratic Party (NDP).

The most recent poll – released today by Pallara Strategic for Maclean’s – maintains the same findings as those of the past month: the PCs have the lead, with 40% of support. According to the poll, for the first time, the Liberals have fallen to third place with just 23% of support, with the NDP party now in second place with 30%.

On April 30, Doug Ford announced his campaign kick off on Twitter, revealing it would take place on Tuesday, May 8 (tomorrow) at the Toronto Congress Centre in Etobicoke.

On April 30, Ford paid a visit to CMHA. In a Tweet, he stressed his party’s $1.9 billion commitment to mental health, addiction services, and housing supports, to “ensure mental health is treated the same as physical health.”

Ford continued his Ontario-wide tour with stops last week in Timmins, Sault Ste. Marie, Kenora, Sudbury, and North Bay. In Sudbury, he promised to bring back the Northlander, a train that ran from Toronto to Cochrane. He also announced he would cut aviation fuel tax for flights to and from Northern Ontario and that he would “build roads to the Ring of Fire and make sure that Northern resources benefit Northerner.”

On May 1 Ontario PCs called for an investigation into allegations Liberal staff destroyed documents. Trillium Power alleges that documents pertaining to a $500-million lawsuit against the government of Ontario were destroyed by officials in former Premier Dalton McGuinty’s office.

On May 1, Ford announced that – in response to strong public backlash – that he would not open parts of the Greenbelt to developers, as he had originally announced to developers he would do.

On May 4, Ford slammed Wynne, taking to Twitter to write, “More executives join Wynne’s secret millionaires club,” with a link to a live Facebook video in which Ford discusses sky-high salaries of Hydro One executives.

The PCs released their latest ads on May 4, in which Ford reiterates that, “the party with the taxpayers’ dollars is over,” and other key messaging we’ve heard throughout his campaign, like his mission to “clean up the hydro mess,” and “end hallway healthcare.”

On May 1, the Liberal Party released a scathing video against Doug Ford, complete with a website, therealdougford.ca. Earlier the same day, they posted a “secret video” of Doug Ford promising to open the Greenbelt to developers. On the same day, the PC party announced the investigation into the allegedly destroyed documents.

On May 2, Wynne announced that if the Liberals were elected, they would expand the Greenbelt into the Waterloo & Paris/Galt moraine complex, the Orangeville Moraine, the Oro Moraine, and the Nottawasaga River corridor, in addition to more catchment areas, wetlands, and small moraines in Dufferin and Simcoe counties.

Naturally, the week couldn’t go by without Wynne taking to Twitter to slam Ford, with a Tweet on May 3.

“The last time Doug Ford was involved in running Toronto, the Fords wasted years, threw out millions of dollars of work & didn’t build one inch of new subway or LRT,” it read. “In fact, they cancelled bus routes. Those kind of political games are costing people every day when they go to work.”

On May 3, Wynne joined Mayor John Tory to sign The SmartTrack Memorandum of Understanding, and to announce that the province would also support several other major transit projects.

On Friday, May 4, Wynne accompanied Prime Minister Justin Trudeau to Cambridge, Ontario to announce a provincial investment of $110 million, an amount matched by the federal government, to secure a $1.4 billion investment that would make Cambridge and Woodstock the North American manufacturing hub for the Rav4.

On Sunday, May 6, the Liberals made headlines with the announcement that they had asked Elections Ontario to investigate the use of Ford’s campaign videos, which they say may break election finance rules, saying that Ford is trying to pass off “political advertising” as media coverage in his Ford Nation Live news-style broadcast.

Today, Wynne made an announcement for more autism support for families.

The NDP party spent some time last week sharing petitions via social media, on everything from demanding a public inquiry into long-term care, to fixing the province’s schools.

Like the Liberals, Ontario’s NDP party also took to Twitter to post the leaked Doug Ford video, which shows the PC candidate promising to hand over parts of the Greenbelt to developers.

On May 1, Horwath announced the NDP party’s GTHA platform, a plan, the party Tweeted that “proves we can do more to make our cities more livable, so that people can build their best life.”

On May 3, it was announced that the NDP party scored top points for their transit plan from TTC riders.