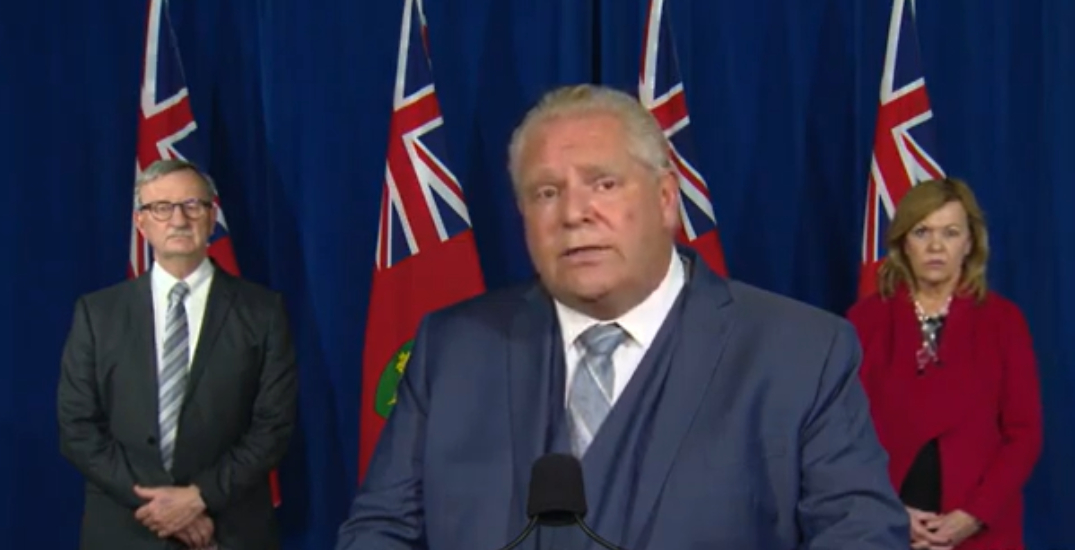 The Government of Ontario announced it is launching a series of COVID-19 education and enforcement campaigns in businesses across the province.

At a press conference on Thursday, Premier Doug Ford said the initiative will ensure employers are taking the necessary steps to keep employees, consumers, and the public safe during the pandemic.

The campaigns will support the current efforts of police, municipal by-law officers, and public health inspectors to educate businesses and enforce the COVID-19 health and safety requirements, the government said in a release.

The campaigns are being carried out in strategic locations, drawing on a team of more than 200 provincial offences officers from across ministries. Officers will be asking employers to produce their workplace safety plans.

To date, three education and enforcement campaigns have taken place and almost 1,000 workplaces have been visited, the government said. No tickets have been issued and all contraventions were resolved with compliance assistance.

“The vast majority of Ontario businesses are following the rules and protecting their workers and customers ― and we thank them for doing their part,” said Ford.

“We’re deploying an army of inspectors to help support our businesses through education and feedback on their safety plans. For the bad actors who are intentionally breaking the rules, I’m providing a fair warning. We’ll find you and slap you with a big fine. It’s that simple.”

A two-day campaign was carried out in Peel Region on November 6 and 7, the government said. Fifty provincial offences officers and six by-law officers visited 330 retail establishments with a focus on supermarkets, big-box stores, and shopping malls.

More than 82% of businesses were found to be in compliance with public health requirements under the Reopening Ontario Act.

During each visit, officers provide business owners with guidance on how to operate safely during the pandemic and comply with public health requirements under the act.

The length of the safety campaigns can range from a few days to several weeks, depending on local circumstances.

The most common areas of non-compliance during campaigns have so far been improper mask use, lack of screening, and improper sanitization, the government said.

A person or business found to not be complying with orders under the Reopening Ontario Act could face a ticketed fine of $750, according to the release.

Any individual convicted of an offence under the Reopening Ontario Act could also face a year in jail. The maximum fine for a corporation convicted under the act is $10,000,000, the release says.

Certain businesses and establishments in the Yellow-Protect, Orange-Restrict, Red-Control, and Lockdown levels are required to develop a COVID-19 safety plan and make it available in writing for review.

Businesses that must have a safety plan include restaurants, bars, food or drink establishments, sports and recreational facilities, and meeting and event spaces.

The government says a campaign is currently underway in Waterloo Region, and more are in the works for seven communities, including Eastern Ontario, York Region, Ottawa, and Toronto.