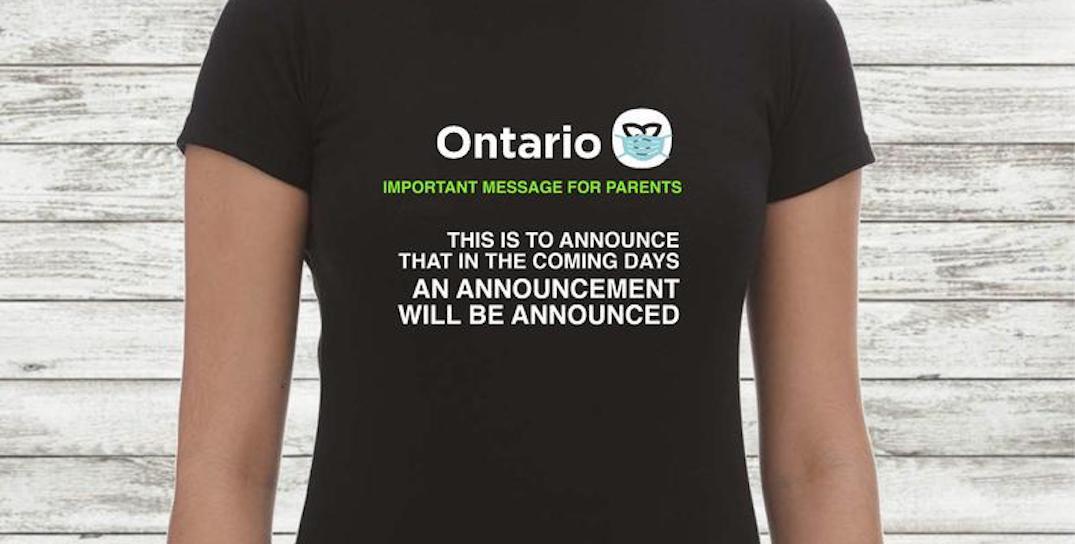 In just under 24 hours, a T-shirt poking fun at the Ontario government’s announcements (to announce announcements) has taken off.

Designed by two friends in Toronto, the shirt takes a hit at the provincial government’s press conferences by saying in print: “Important message to parents: This is to announce that in the coming days an announcement will be announced.”

Which… does happen, especially when it comes to school reopenings.

“A good friend messaged me with an idea for the shirt, and I told her to show it to me so we could discuss it. She showed me the mock up, and I was like, ‘This is good.’ I redid it last night and it just took off way better than we could have ever imagined,” Benn Brisland, a social worker based in Toronto, told Daily Hive.

The idea was sparked by his friend Rebecca Ackerman, who is part of a local Facebook group where people often share opinions and anxieties on the latest announcements coming from the province about new COVID-19 information.

But it became a running joke that every time the government made an announcement, it was just to announce another announcement.

“If you don’t laugh about it you’ll just cry. We realized it was such a golden line for us,” Ackerman told Daily Hive.

So, she contacted Brisland, who has been making T-shirts for the last two to three years, and he whipped up the final design on the night of February 1, putting it up on Etsy to rave reviews.

“It caught fire and it just went,” he said. “I knew too I had to get it out quickly because it would be old news soon.”

The T-shirt was initially posted on “mom groups” and local discussion forums, but it began to circulate on social media with journalists and teachers sharing the post.

“At this point in this pandemic if you don’t laugh about it, the only other option is to fall apart. We’ve come to rely so heavily on these announcements from the Ford government. I know everyone is doing the best they can in an unprecedented situation. But we’re just so desperate for information,” Brisland said. “You’re always getting half the information or pieces.”

Brisland and Ackerman are both parents, and after Education Minister Stephen Lecce’s announcement on Monday, which announced another announcement on school reopenings, they got the idea for the shirt design.

“I don’t think there is a great emphasis on mental health resources in the TDSB or our government at all,” Ackerman added. “There seems to be a disconnect to have an announcement to make us anxious but then you’ll have to wait another couple of days for the announcement. It feels almost disrespectful to parents and not very sensitive to what we’re all going through.”

While the shirt is meant to give everyone a laugh in these difficult times, she emphasized that there is truth to it, as frustration lies underneath the comedic message.

Profits from the shirt sales will be going towards serious causes, with one being to support family members who lost loved ones in a massive fire last week in Toronto’s east end that resulted in the death of four residents.

The shirt has received positive feedback from the community, and at the end of the day for both friends, it’s about giving back during these turbulent times, whether that’s with a laugh and financial support for those in need.

You can find your favourite new shirt on Etsy for $28.