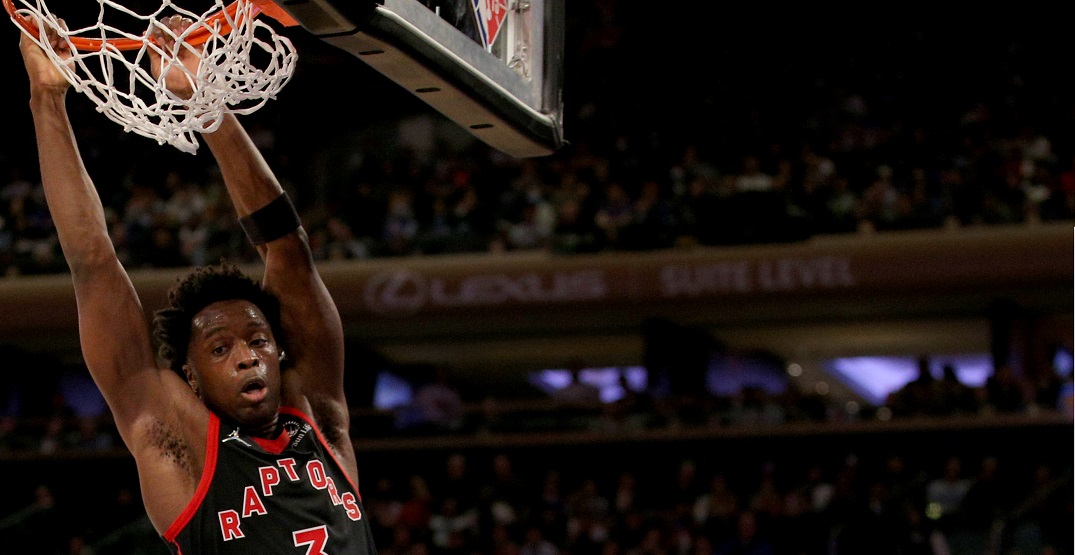 When the NBA’s brightest lights are on him, Toronto Raptors small forward OG Anunoby has shown he’s ready to shine.

In Monday night’s 113-104 victory over the Knicks at New York’s famed Madison Square Garden, Anunoby exploded for a career-high of 36 points while adding six rebounds and two assists.

As far as NBA regular season games go for the Raptors, this was about as big as you can get.

The game was nationally televised on TNT in the United States. The Raptors faced a surging New York team in second place in the Eastern Conference.

It was also a major milestone for the NBA as a whole, as a pre-game ceremony marked the 75th anniversary of the league’s first game, taking place in Toronto between the Knicks and the now-defunct Huskies franchise.

In short, more eyes than usual were on the Raptors and Anunoby to see what they could do against a strong Knicks team.

It was a big early season test for a Raptors team that was missing both Pascal Siakam and Scottie Barnes due to injury, but Anunoby’s performance helped lead the Raptors to a memorable, statement win.

On the court, Anunoby showed out and put together a performance he won’t soon forget. Anunoby took 27 attempts from the field, six more than his previous career-high.

Off the court, Anunoby is usually known for letting his game do the talking, as short, quiet answers have been a staple of his media interactions since coming to Toronto in the 2017 draft.

But a soft-spoken Anunoby might be thing of the past.

A post-game interview with NBA TV’s Dennis Scott raised a few eyebrows amongst the Raptors fanbase, as Anunoby was, well, much more responsive than we’ve come to know him.

“We’re just a tough, resilient team,” Anunoby told Scott. “Next man up. We have a talented team, we’re just waiting to get guys back. We’re going to keep playing hard, and we know we can win ball games.”

Raptors Twitter couldn’t get enough of Anunoby opening up much more than they’d seen from him in the past.

Look at the growth! This man used to answer every question with literally one to two words. Now look! Ugh I’m so happy for him. I always knew his time was coming. https://t.co/Uv5WDsUxl7

I’ve never seen this guy speak so many words in my life https://t.co/6P3T140NUs

Now 24, Anunoby’s confidence and the continued growth of his game have been a long time coming.

As the team’s roster has undergone tremendous turnover over the last few seasons, Anunoby has been thrust into more of a leadership role.

It hasn’t been all smooth sailing for Anunoby and the new-look Raptors. In the opening two games of the season, Anunoby shot 3-17 and 4-17 from the field.

But when Anunoby’s rolling like he was in New York, Toronto usually is too.

Averaging 38 minutes a night over the last four games, Anunoby has put up 92 points over that timeframe.

With the way that OG has stepped up, it’s no surprise that Toronto’s reeled off four straight wins, as they continue their early-season push to return to the playoffs.