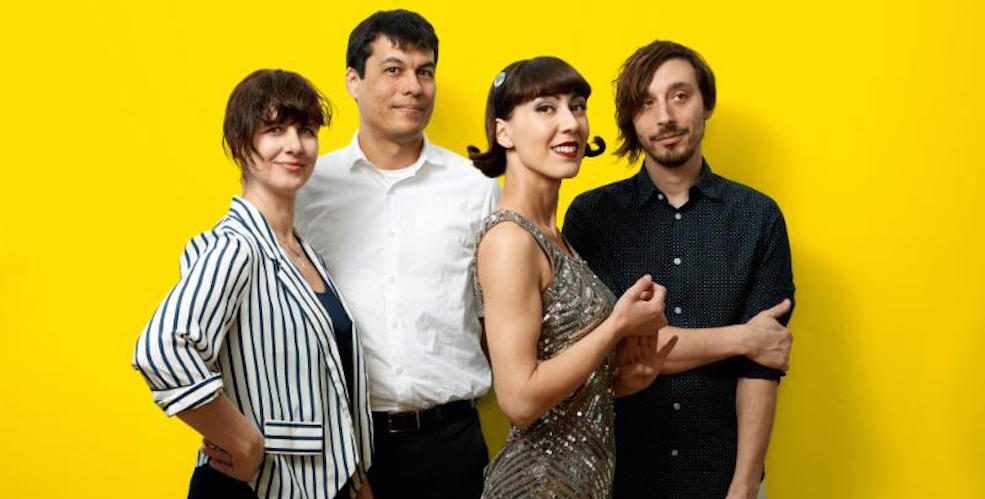 Alongside being fixtures in Austin, Texas’ local music scene, talented multi-instrumentalists, and prolific songwriters, the Octopus Project have also added sought-after film and video game composers to their resume.

Since their last full length, Fever Forms, was released in 2013, the four-piece comprised of Josh Lambert, Toto Miranda, Yvonne Lambert, and Lauren Gurgiolo has penned original music for Karakasa Games (Frankenfoods and Thunderbeam) and won the Special Jury Award for Musical Score at the Sundance Film Festival for Kumiko, the Treasure Hunter. Currently, they’re in the process of working on the score for Damsel, an upcoming comedy-western movie starring Robert Pattinson.

Right now, though? The band is shopping, purchasing a few last minute essentials before embarking on a North American tour in support of their forthcoming sixth studio album, Memory Mirror.

“I feel like the newest record is the first one we’ve done since we really started getting into soundtrack stuff and, maybe as a reaction against doing the soundtrack stuff — which is, you know, super cinematic and super mellow a lot of the times, more ambient — I think [with] this record we decided to do the opposite and go as immediate and as intense as we could,” guitarist/bassist/keyboardist Josh Lambert says, speaking over the phone.

Generally, when the Octopus Project writes music, inspiration is sprouted from a sound or texture — noodling on the guitar or manipulating things on the computer. “It’s like sketching,” Lambert explains, “or gathering ideas and seeing what sticks.” The song “Small Hundred,” a vibrating, beat-driven cut off the new album, for example, was shaped from the celebratory pop of sparking wine.

“Toto was totally obsessed with recording a champagne bottle popping and wanted to use it in a song,” Lambert laughs. “And we spent an entire European tour — not drinking champagne the whole time, but anytime it was around we would try to record it. And it took a few tries, but we finally got one that worked out. It’s surprisingly hard to get a good cork popping sound, but we got one that worked out and he ended up sampling that and pitch shifting it and using it as the melody for the chorus part of the song.”

Lyrically, the band’s approach remains much the same. On Memory Mirror, there is no particular narrative — the group came up with words or phrases that they liked the sound of together. “They’re all sort of absurdist, surreal imagery and stuff like that, that hopefully the listener can then take in and have their own meaning,” Lambert says. “And that’s my favourite stuff, where the interpretation is left totally up to me. It just makes it more special and important.”

The kaleidoscopic nature of the Octopus Project translates to their work as a whole — their music videos and live performances, specifically, are a multi-sensory experiences, where vibes are further illustrated by visuals, psychedelic production, lights, and, of course, an amalgamation of musical instruments. The Octopus Project are artists that aren’t bound to create within a singular medium — their creativity spans dimensions — and Memory Mirror is sure to provide their audience with something nuanced and exhilarating to get lost in.

“I feel like we’re all just really excited about making stuff and, because we are a band, we try not to limit ourselves to just the musical side of things,” Lambert says. “It seems way more exciting, like, ‘oh, we get to make a video now,’ or a live video, or we get to program with some lights for the show, or sew crazy costumes, or whatever it is. It’s just kind of an excuse to keep making stuff. It doesn’t need to just stop at the music, I feel like. We’re all just all of the time, ‘what can I do? What can I be making? What is there to do?’ And we can literally do anything, so we do!”

When: Saturday, April 15
Where: The Silver Dollar – 486 Spadina Ave.
Toronto