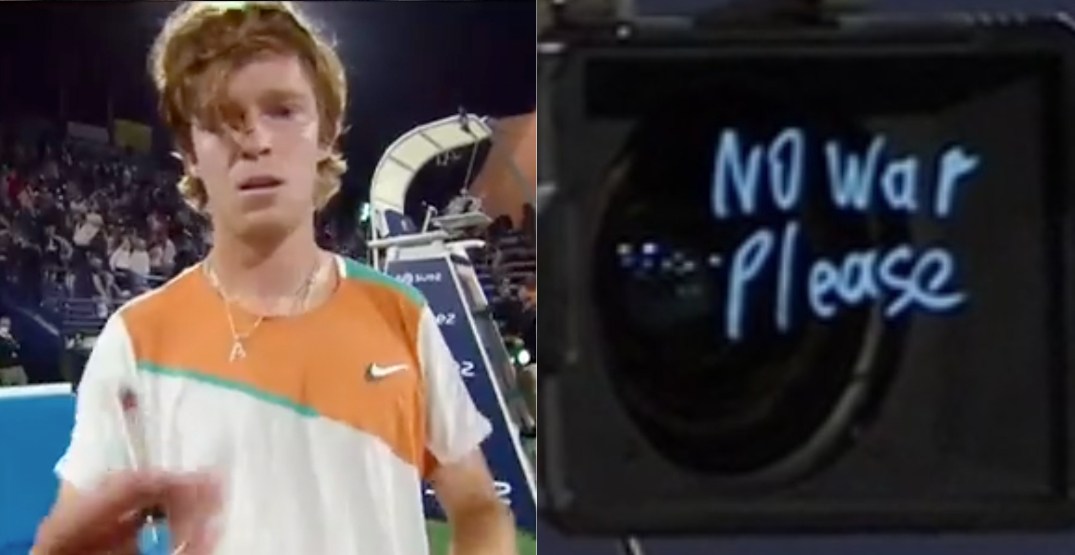 Russian tennis player Andrey Rublev penned “No war please” on a television camera after advancing to the final of the Dubai Tennis Championships.

Russia launched a full-scale invasion on the neighbouring eastern European country of Ukraine early Thursday. Troops raided the border by land, air, and sea, forcing civilians to evacuate and shelter themselves from explosions.

“In these moments, you realize that my match is not important. It’s not about my match, how it affects me,” Rublev said, according to ESPN. “What’s happening is much more terrible.

“You realize how important (it) is to have peace in the world and to respect each other no matter what, to be united. It’s about that. We should take care of our earth and of each other. This is the most important thing.”

Rublev, from Moscow, is the no. 7-ranked tennis player in the world. The 24-year-old has won nine ATP singles titles in his career.

He is one of many from the sporting world to speak out on the assault, which also includes Ukrainian-born Toronto Raptors player Svi Mykhailiuk. He posted a joint statement with fellow Ukrainian NBA player Alex Len of the Sacramento Kings calling the attack on Ukraine a “great tragedy.”

“We categorically condemn the war,” the statement read. “Ukraine is a peaceful, sovereign state inhabited by people who want to decide their own destiny. We pray for our families, friends, relatives, and all the people who are in the territory of Ukraine. We hope for an end to this terrible war as soon as possible.”

“The IIHF and its Council condemn the use of military force and urge the use of diplomatic means to solve conflicts. Our thoughts are with the people in Ukraine and the Ukrainian ice hockey family,” the IIHF said in a statement Friday.

The IIHF is saddened & deeply concerned by the recent events in #Ukraine. The IIHF condemns the use of military force and urges the use of diplomatic means to solve conflicts. Our thoughts are with the people in Ukraine & the Ukrainian ice hockey family🇺🇦https://t.co/dfLXnenUFR pic.twitter.com/8j2qrJwB62

Jokerit Helsinki, a Finnish-based team playing in Russia’s Kontinental Hockey League, confirmed it will withdraw from the league’s playoffs following Russia’s invasion of Ukraine. Jokerit was scheduled to open postseason play against Spartak Moscow on March 1 in Finland.

Jokerit will not participate in this year’s playoffs. Team’s season has thus come to an end.#Jokerit #KHL

“My position on the end of the season was clear right on Thursday morning,” team owner and general manager Jari Kurri said in a statement, according Google Translate. “However, in accordance with KHL policies, I had to have discussions with the league. That is why we are unfortunately only able to report this now.

“The world is going through really difficult times right now. All our thoughts are with the people suffering from the situation. We hope that a peaceful solution to the situation can be found soon.”

Formula One racing has announced the Russia Grand Prix, scheduled to take place in Saint Petersburg from September 23-25, will not be held this year. UEFA announced Thursday that it has stripped Russia of its hosting duties for the upcoming Champions League Final, which was set for Sochi on May 28.

The International Olympic Committee has also called for all sporting events in Russia and Belarus to be cancelled or moved, saying it has a “strong condemnation of the breach of the Olympic Truce by the Russian government and the government of Belarus through its support in this.”

IOC Executive Board urges all International Federations to relocate or cancel their sports events currently planned in Russia or Belarushttps://t.co/w3zJFhiWpc

The Olympic truce began seven days prior to the start of the Olympic Games on February 4, and ends seven days after the closing of the Paralympic Games, scheduled for March.