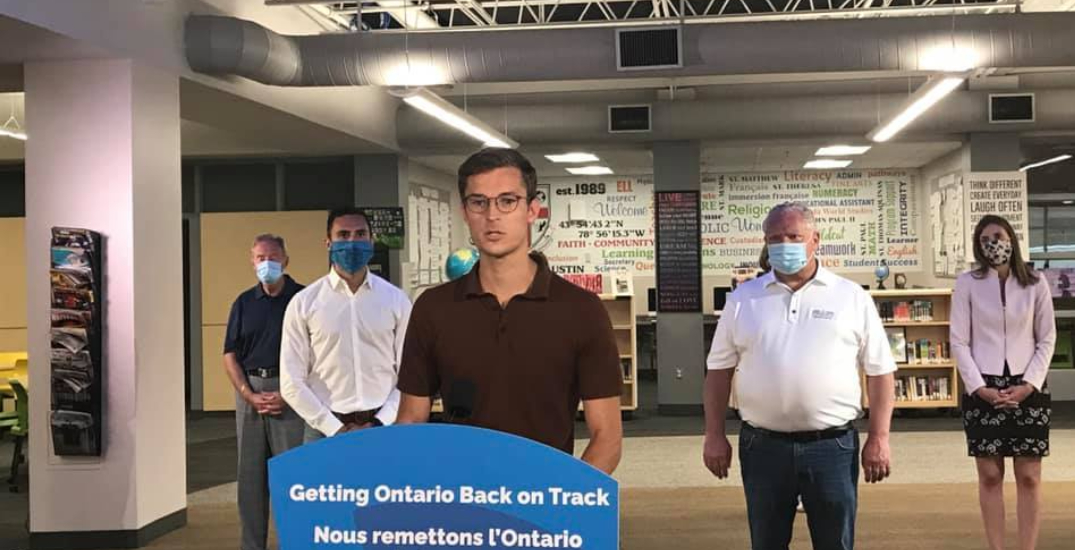 Conservative MPP Sam Oosterhoff has apologized after pictures of himself without a face covering at a large indoor gathering were shared.

The MPP for Niagara West-Glanbrook posted the photos, which show upwards of 20 people gathered together without physical distancing, to his Facebook page. He has since deleted the post, but screenshots are circulating across social media.

Oosterhoff is also the Parliamentary Assistant to Stephen Lecce, Ontario’s Minister of Education.

“Ontario has a monitored gathering limit of 50 in staffed locations. This was an event at a staffed banquet hall, with under 50 people, including 5 tables distanced and limited to under ten people at each,” Oosterhoff said in a statement to Daily Hive.

“However, I should have worn a mask when we took a quick pic, given the proximity of everyone, and I apologize for failing to do so.”

In his statement, Oosterhoff referenced the Government of Ontario’s September decision to limit gatherings across the province to 10 people indoors and 25 people outdoors.

At a coronavirus press conference on Monday, Ford said he had confidence in Oosterhoff and believes he’s doing a great job representing the Niagara West-Glanbrook area.

“He came out and apologized. Guys, everyone makes mistakes,” said Ford. “He’s a great representative. I’m proud to have him on the team. He’ll continue being the PA to the education minster, doing a great job.”

But not everyone expressed that sentiment.

Anthony Dale, President and CEO of the Ontario Hospital Association, called for Oosterhoff’s resignation as Lecce’s PA, tweeting, “How many health care workers gathered this weekend for a party with 40 other people indoors?”

Dr. Jill Anderson, NDP MPP for Toronto-St.Paul, also tweeted her disapproval of the 23-year-old MPP, saying, “Ontario had over 1000 cases of #COVID19 for the first time yesterday. But Sam Oosterhoff thought it was the time to gather indoors, with 30+ people w/out masks. @samoosterhoff- don’t pretend you didn’t know why this was wrong. Admit you didn’t care.”