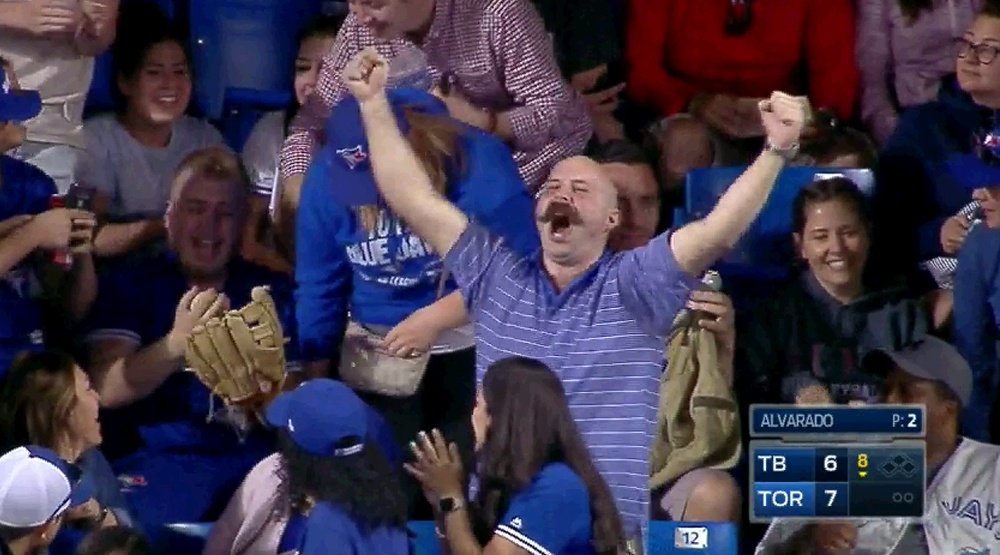 Baseball is full of characters; not only on the field, but in the stands. Sometimes, the devotees sitting in the stands are just as fascinating as the athletes themselves.

Enter this Blue Jays fan from Tuesday’s game; he was sitting in the section where Russell Martin’s go-ahead home run was hit. This guy could not be happier about the turn of events for the Blue Jays.

This guy to throw out the first pitch, please. pic.twitter.com/C8OCxiTCIO

Who is this mysterious, magical, moustachioed Blue Jays fan? Where did he come from? How did he get his moustache that way? Why is he wearing a shirt with horizontal stripes and shorts with vertical stripes?

Thankfully, Twitter responded to many of these burning questions about the origin of the fan simply known as “moustache man”.

Is that Dr. Robotnik?

He does kind of bear a resemblance to Sonic the Hedgehog’s arch nemesis, doesn’t he?

We may have just found our newest Toronto sports fan meme of the week.

Indeed, a very bold wardrobe choice. But when you’re sporting that moustache, most people probably won’t even notice that your shirt clashes with your shorts.

Could it be? Nah.

He needs 3 more guys and some harmony

To me, this is the most logical explanation. He is the human reincarnation of Mr. Porter from Paw Patrol. He just wanted to enjoy a Jays game without fear of consequence by his clumsy grandkid, Alex.

TIL Rich Uncle Pennybags from the game 'Monopoly' is a Blue Jays fan https://t.co/BipOQ7HZ22

What if “moustache man” is actually the Monopoly Guy? He’s nearly unrecognizable without his top hat and cane.

We may never learn the true identity of this charming character from Tuesday’s Blue Jays game. But for one brief moment, the “moustache man” reminded us how incredible it feels to see your team comeback to win.

All the while, sporting a moustache which made him worthy of being in a barbershop quartet.