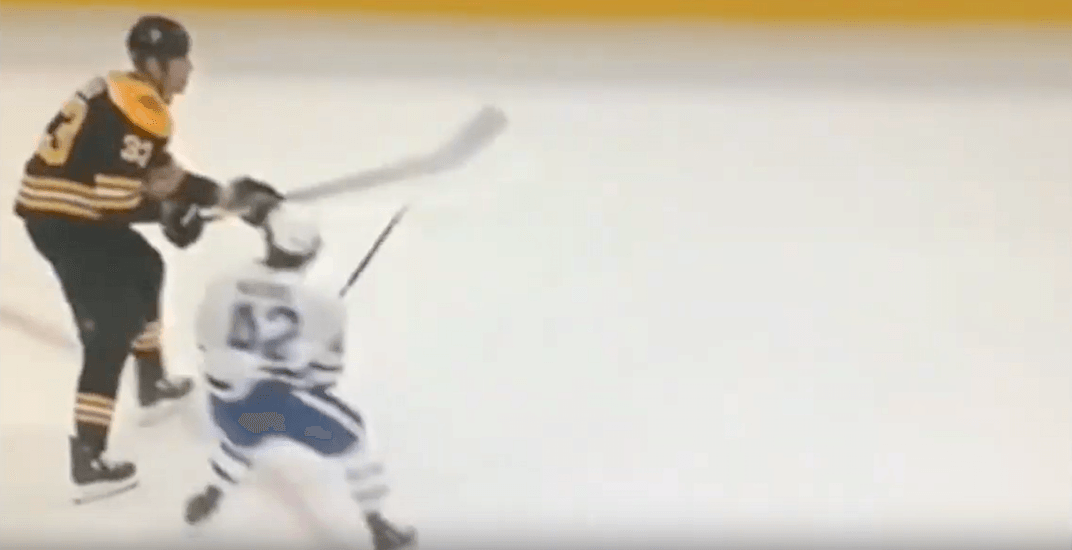 Last night’s Game 1 victory for the Toronto Maple Leafs against the Boston Bruins had a lot of exciting plays — two goals from Mitch Marner (including one a penalty shot), a laser-like pass from Nazem Kadri to set up William Nylander on a breakaway, and a bevy of saves from goaltender Frederik Andersen.

But the morning after the win, much of the talk focused on a play that didn’t even get much talk (or even a replay) on the CBC broadcast: 5-foot-10 Trevor Moore’s hit on 6-foot-9 defenceman Zdeno Chara.

With the elder Chara carrying a weight advantage of 250 pounds to Moore’s 182-pound frame, it certainly came as a bit of a surprise. And as Chara has had the Leafs’ number in the last two playoff matchups between the two teams, it was perhaps a bit of symbolism: if he can be taken down, so can the Bruins.

Leafs fans on Twitter were fired up over the hit, as it’s often been mentioned that their team doesn’t have the physical style to match up with the Bruins.

If everyone on the Leafs played like Trevor Moore this team would go 16-0 in the playoffs https://t.co/KbbazflZND

“The Leafs are too soft”

Moore, who made his NHL debut earlier this season after signing a two-way contract with the Leafs as an undrafted college free agent, seemed to be enjoying his first NHL playoff game.

Trevor Moore's phone only blew up this morning because his hit on Chara didn't make the broadcast last night 😂#StanleyCup pic.twitter.com/BuEv1Ahk7R

Moore hasn’t solidified a full-time place in the lineup yet, as he played just 25 games in the NHL this season, all of which came on the Leafs’ fourth line. But with physical play like that, it will surely help him stay in the good books of head coach Mike Babcock.

It wasn’t the only noticeable use of physicality from the Leafs, as Connor Brown also laid a big hit on winger Marcus Johansson.

After Toronto took a 3-1 lead in the game, it seemed like Boston’s players were doing what they could to shake the Leafs to take a dumb penalty.

As the Bruins scored more power play goals at home (42) than any other team in the league this season, there was more than enough reason for them to do everything they could to draw a penalty. Boston’s opening (and only) goal came from Patrice Bergeron on the power play.

But the Leafs took just two penalties in the game: both unintentional high sticking infractions. The Leafs managed their emotions in a notoriously tough environment, and let their play speak for itself. They also out-hit the Bruins 33-31.

The series is far from over, but if Game 1 was any indication, Toronto showed that they’re not a team to be messed around with easily.