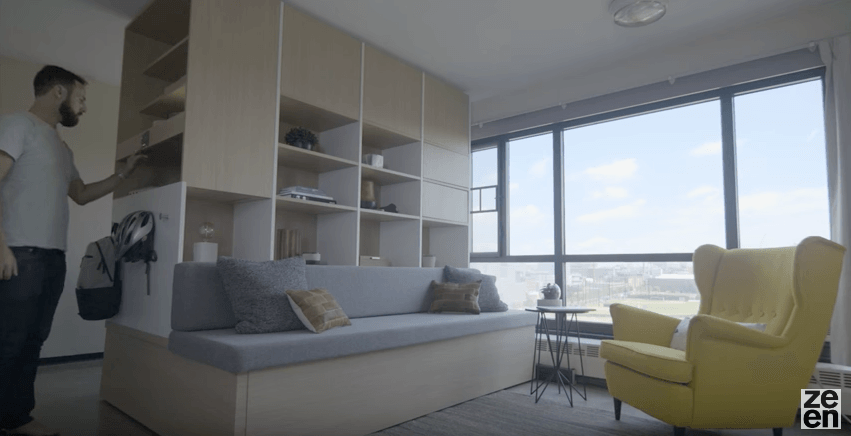 It’s like choose your own adventure, but for your apartment.

If you’re like many urban millennials in Canada, you’re paying through the teeth to live in a space more akin to a closet than an actual apartment.

And it doesn’t look like that’s going to change anytime soon.

But that doesn’t mean somebody hasn’t been sitting around wondering how to get more space out of the little they have.

Ori, as you might have guessed, comes from origami and “Like its etymology, Ori is a prefix for something magical to come.”

The first generation of Ori offers a bedroom, living room, and office all in one. Essentially, it’s a large, two-sided Swiss Army Knife of a cabinet that hides and releases everything your small studio apartment could ever need – including a retractable bed.

And it moves across the floor at the touch of a button, allowing you to have several different setups whenever you want, even when you’re not there. That’s right, thanks to the Ori app, you can move your furniture when you’re not at home. Left from the office but want to return home to the bedroom? No problem.

There’s a closet, plenty of storage space, a media wall, and a couch option too.

It’s like someone finally understood that the Murphy bed needed an upgrade and then went 10x further.

There’s no word on pricing yet but the first systems will be released in 2017.

So what do you think? Is this the future of urban living? Watch the video and let us know if this is something you would want in your own apartment: