An LRV at the Eglinton Maintenance and Storage Facility on May 22. Source: Metrolinx

All that crazy underground construction on Eglinton Avenue has finally shown some light at the end of the tunnel, as Metrolinx unveiled—and tested—the shiny new Light Rail Vehicles (LRVs) for the first time ever before the public eye.

The LRVs, which will eventually run on Toronto’s Eglinton Crosstown LRT line, were revealed at a media event on May 22 at the Eglinton Maintenance and Storage Facility, where they are inspected and maintained.

“This is a very exciting milestone for the Eglinton Crosstown LRT (light rail transit) project and for Metrolinx. Our commercial and project management with Bombardier is delivering what we expected,” said Phil Verster, Metrolinx president and CEO.

The LRVs have doors on both sides and a neutrally coloured exterior—a simple black and white. The reason, according to Metrolinx, is so they resemble the subway’s metal finish, since the Crosstown line—which will also be called the Eglinton Line 5—will be considered part of the city’s subway system.

And like subways, the company says that the LRVs can reach speeds of 80 km/h, though the speed will be geared according to the spacing between stops. The average speed will be 28 km/h (to compare, the Bloor-Danforth line’s subway zooms around at an average 32 km/h).

Metrolinx also says that the LRVs will be able to transport 200 passengers at a time, will produce zero emissions by running on DC power, and will avoid traffic by running on their own dedicated right-of-way. 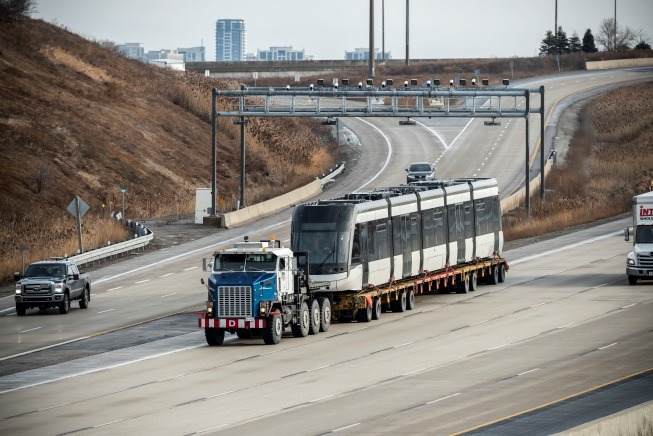 The first LRV being brought over to the Eglinton Maintenance and Storage Facility in January 2019, on a flatbed specifically designed to transport it. Source: Metrolinx

Scheduled to go into service in 2021, the LRVs will be a sort-of silver bullet (figuratively, and given their appearance, it seems quite literally), to Toronto’s busy mid-town traffic, and mid-towners looking for easier access to existing subway lines.

According to the province, the 19-kilometre Crosstown line will have integrated connections to 54 bus routes, three subway stations, three GO Train lines and the UP Express. 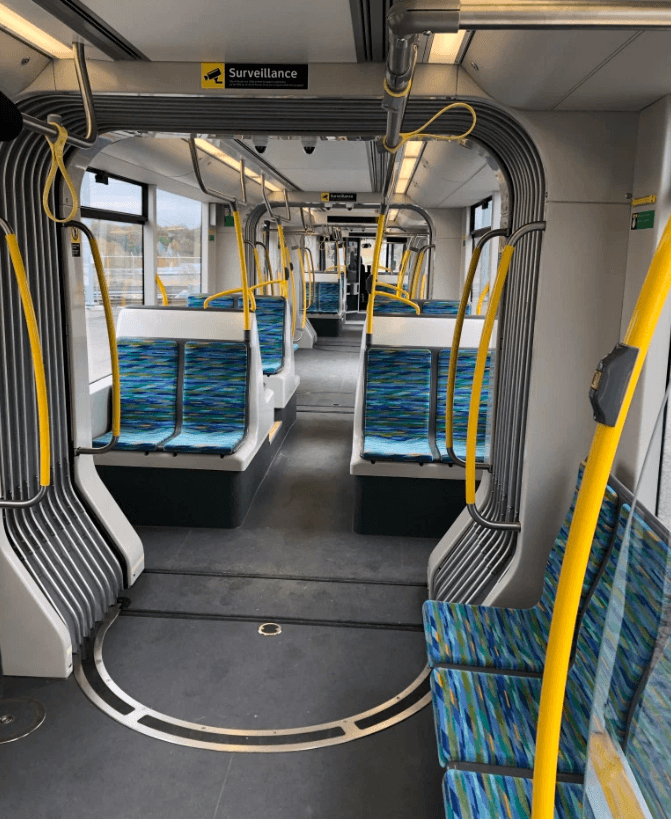 The interior of a LR vehicle/ Nitish Bissonauth

“The progress we are making on the Eglinton Crosstown LRT project is great news for people who have been waiting a long time for easier access to Toronto’s subways,” said Kinga Surma, Parliamentary Assistant to the Minister of Transportation, in a statement.

“These light rail vehicles represent the first step towards the next generation of public transit in our region and will connect more people throughout Toronto with new jobs and opportunities.” 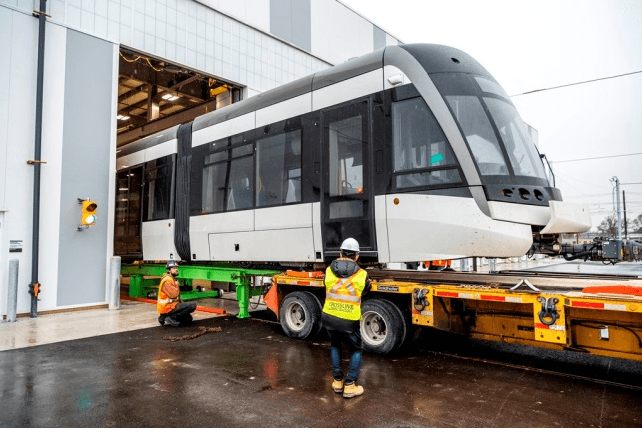 The rest of the LRV deliveries are underway and will continue until all 76 LRVs have arrived in 2021, according to Metrolinx.

The public will have the opportunity to take a look at the new LRVs at the Eglinton Maintenance and Storage Facility on May 25, as part of Doors Open Toronto.