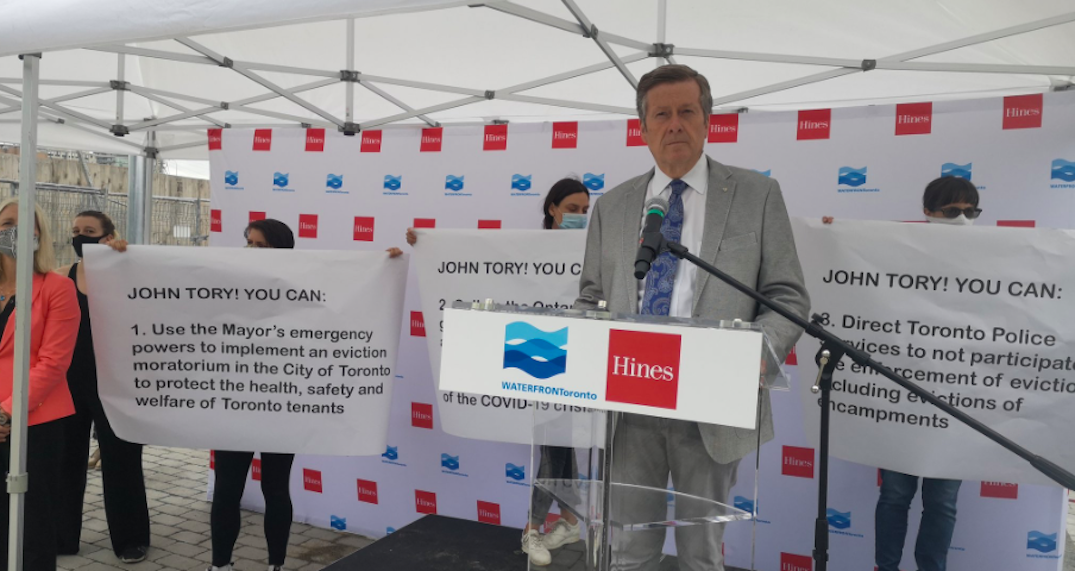 The Toronto Police had to escort Mayor John Tory from a condominium development ceremony, after protestors showed up demanding he help tenants who could face evictions during the COVID-19 pandemic.

On Thursday morning, Tory was giving a speech live from the ground-breaking of T3 bayside — a 10 story development that is a “highly sustainable” timber office tower that will “enhance the city’s waterfront” while supporting 1,000 new jobs, including temporary construction employment.

However, as the mayor was giving his remarks on the development, tenants staged a protest at the 261 Queens Quay East location, pressing Tory to implement an emergency eviction moratorium to prevent COVID-19 evictions.

The protest, organized by Parkdale Organize and People’s Defense Toronto, is coming after the province passed Bill 184 on Tuesday, which the organizers have dubbed the “Mass Eviction Bill.”

Tory was escorted by the police out of the premises, with protestors calling him a “coward.”

Following the event, the mayor released a statement saying he has “fought throughout the COVID-19 pandemic for tenants – both residential and commercial tenants who have been hit hard by this crisis.”

Tory responded to the four major issues raised by the protestors, the first being for the mayor to use emergency powers to implement an eviction moratorium in Toronto.

“Although City Legal staff have advised that the City has no legal authority to impose a ban on evictions, I have spoken out against residential and commercial evictions throughout this crisis and will continue to do so. I have been clear in stating that no eviction should take place without a hearing,” Tory said.

Second, that Ontario repeal Bill 184, to which Tory said he disagrees with some of the changes outlined in the bill, which include eviction and forced rent payments for unpaid rent during the pandemic.

“The City Solicitor is reporting directly to City Council with advice on the possibility of legally challenging those provisions of Bill 184 which undermine the rights of tenants to a fair hearing,” the mayor added.

Third, that the Toronto police do not participate in the enforcement of evictions and eviction encampments.

Tory noted that City staff are working with homeless residents in encampments to provide them with more stable housing options.

And that, “Toronto Police do not conduct evictions and are only contacted when there are public safety concerns. No elected official is permitted to direct the daily operations of the police service.”

Lastly, to support tenants that cannot pay rent due to the pandemic, to which Tory said he has “repeatedly called on landlord to find ways to help tenants and has supported the provincial ban on evictions.

“It took hundreds of tenants paying a visit to Tory’s condo for him to read the Bill which had its first hearing back in March as the pandemic was unfolding and the province declared a state-of-emergency,” Brian Doherty, of Parkdale Organize, said in a statement.

“Surely by now the mayor understands the disaster that will unfold if Bill 184 is allowed to be carried out in the city as intended.”

On July 7, protestors went to Tory’s apartment building to protest Bill 184, in which section 83 has been amended to allow landlords to apply to evict tenants who owe money from March 17, 2020.