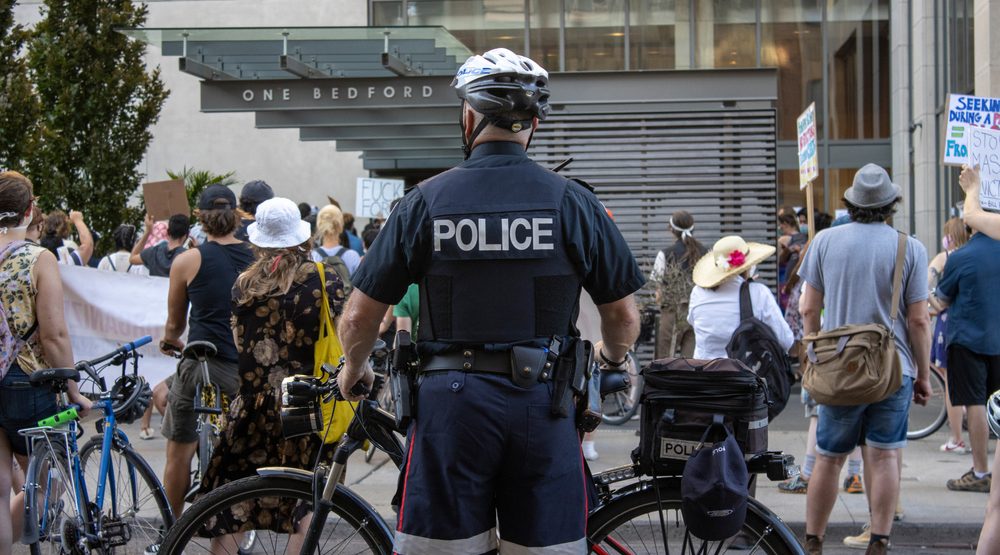 Police and protestors outside of Tory's condo. (Cameron Ballantyne-Smith/Shutterstock)

On Monday night, a crowd marched to Mayor John Tory’s condo to protest evictions, resulting in the arrest of one person for assaulting a police officer and multiple cautions being issued.

The group was calling for a stop to evictions in the city and went to the Mayor’s apartment building in Yorkville to demonstrate loudly.

Another video shows a protestor climbing a structure outside of the building and police can be seen pulling her down, while other people are heard shouting.

A group alleges that the police “forcibly punched, pushed, and tried to detain protestors.”

A spokesperson from Toronto police told Daily Hive that one man was arrested and released unconditionally for assaulting an officer. Several members of the group were cautioned and there are no current reports of injuries.

Also on Monday at 5 pm, a rally was held at Queen’s Park to protest Bill 184, which is a new provincial bill that protestors say weakens tenants’ rights, allowing landlords to evict thousands of people after the pandemic.

Specifically, section 83 has been amended to allow landlords to apply to evict tenants who owe money from March 17, 2020.