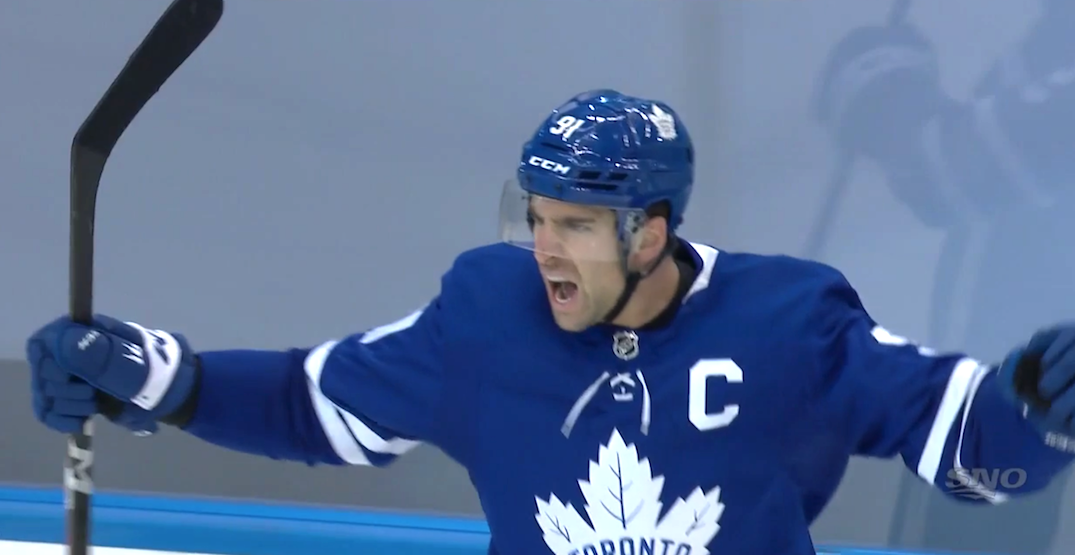 The Toronto Maple Leafs are back in the win column, evening up their best-of-five qualifying round series against the Columbus Blue Jackets with a 3-0 victory in Tuesday afternoon’s Game 2.

With Blue Jackets’ goalie Joonas Korpisalo looking like a Vezina Trophy candidate through much of the first five periods of the series, it was Auston Matthews who finally scored the Maple Leafs’ opening goal of the postseason, following a 2-0 loss on Sunday.

On Toronto’s 28th shot of the game, Matthews came through with a slick redirection from Zach Hyman with exactly four minutes remaining in the second period.

With one of just two teams getting a true home-ice advantage by way of hosting a hub city, the Leafs looked different — in a good way — to the team that was shut out completely in the first game of the postseason.

Allowing just six shots on net against in each of the first and the second periods, the Leafs were able to even up the series at 1-1.

John Tavares doubled the Leafs’ lead to two on his eighth shot on net of the game on a breakaway caused by a Blue Jacket defensive breakdown about five minutes into the third period.

Morgan Rielly added an empty netter from his own zone to cement the win in the final minute.

Frederik Andersen stopped all 20 shots he faced, his third career playoff shutout and first in a Leafs’ uniform.

But unfortunately, one event that put a damper on the high of victory came right near the end of the third period.

With a little under two minutes to play in the game, Leafs’ defenceman Jake Muzzin was involved in a scary collision in his own end and was stretchered off the ice. Though he did appear alert, vocal and mobile while on the ice, it was unclear at first glance what exactly the injury was, though it did appear he may have hit his head quite hard against the legs of Columbus forward Oliver Bjorkstrand. Leafs’ coach Sheldon Keefe told reporters he was taken to hospital.

Sheldon Keefe on Jake Muzzin: “He was taken to hospital. He was responsive.” Waiting for more details.

It was clear to Leafs past and present, as well as their opponents, that Muzzin’s injury was at the front of their mind. However, Tavares did seem to be encouraged by what he’d heard so far:

On Muzzin, Tavares says “All signs are very positive”

Blue Jackets' Zach Werenski: "First and foremost, our thoughts and prayers are with Jake Muzzin. … No hockey game is as important as someone's health so we're thinking of him right now."

Right out of the opening gate, Toronto looked ready to control the pace of play at both ends of the ice.

Leafs’ fourth-line winger Kyle Clifford threw a big hit early in the first at defenceman Dean Kukan would have generated a large cheer had fans been in the audience.  The check forced the Jacket off the bench for evaluation, but he did return later in the first.

Besides the lack of scoring, a big gripe among the Leafs’ fanbase was Toronto being awarded just one power play in Game 1.

But Toronto equalled that total with Kasperi Kapanen drawing a man-advantage when he was high-sticked by Vladislav Gavrikov just 5:23 into the first, and doubling a couple minutes later where Nick Foligno also picked up a holding call against Kapanen. In total, the Leafs had five power play opportunites on the day to the Blue Jackets’ four. Neither team scored a goal with the man advantage.

Though he was held off the scoresheet for his fifth playoff game in a row, Mitch Marner produced five shots on net after contributing zero in the opening contest. In just his second ever NHL game, Nick Robertson managed four of his own shots on net.

From the Blue Jackets’ point of view, it was largely a game to forget. According to NaturalStatTrick.com, the Leafs lead the expected goal count in all situations 4.61-1.87, meaning the end result actually could’ve swung worse the other way.

The teams get play again Thursday night at 8 pm ET in Game 3.