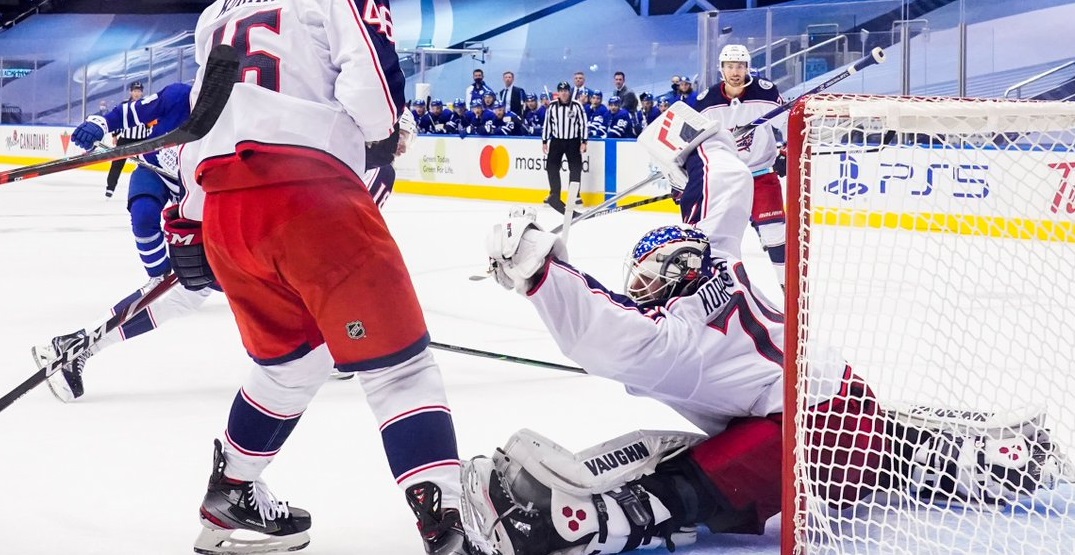 The Toronto Maple Leafs opened their qualifying matchup against the Columbus Blue Jackets looking nothing like their usual selves, in both good ways and bad.

Having a reputation for both scoring and allowing a lot of goals, the Leafs did neither as they fell 2-0 in Game 1 of their best-of-5 play-in series.

The Leafs were shut out just once this season previously, in a March 5 1-0 defeat in Los Angeles against the Kings.

Frederik Andersen made 33 saves, but it was the one that got away that will be likely giving him fits as Cam Atkinson scored the first goal for Columbus with a floater from the faceoff circle off an even-strength rush 1:05 into the third period.

Alexander Wennberg added an empty netter with just under 20 seconds to go in the third to effectively end the game.

Making his NHL debut for the Leafs was 18-year-old forward Nick Robertson, after an impressive OHL season where he managed 55 goals in just 46 games for the Peterborough Petes. Robertson played 12:28, registering a shot on goal.

Not that days of the week have much meaning any more, but the contest was just the Leafs’ fourth Sunday game of the season.

The first two periods went by without much fanfare. Atkinson and Cody Ceci each picked up a penalty, while Ceci picked up his second infraction of the game just over four minutes into the third period.

Jackets coach John Tortorella made an interesting goalie choice prior to puck drop, opting for Joonas Korpisalo over rookie Elvis Merzlikins. Each split fairly equal playing time this season (Korpisalo led with 35 starts compared to 31), but Merzlikins’ save percentage of  .923 was considerably larger than Korpisalo’s .911. Neither had any NHL postseason experience.

While Korpisaalo has been in the NHL on and off since 2015-16, there’s barely any age difference between the two — Merzlikins is actually 13 days older, as both were born in April 1994. But Korpisaalo more than lived up to his coach’s choice, making stops on all 28 shots that he faced, including a great glove save on Auston Matthews with just under four minutes remaining in the second period. Matthews led the Leafs with six shots on net.

Joonas Korpisalo stops 28/28 to grab the @pepsi shutout as the @BlueJacketsNHL take Game 1 in the #StanleyCup Qualifiers. pic.twitter.com/uHixh6wsDS

Columbus effectively neutralized Toronto’s forward group, stifling any real offensive chances. And while the Jackets didn’t have much going for them in the offensive zone either, they will be more than satisfied with their 1-0 series lead.

Overall, it registered as one of the more frustrating playoff games in recent memory for the Leafs. Toronto had every opportunity to win a tight contest, but never really seemed to threaten the Jackets to their capabilities.

As expected, fingers were pointed in just about every direction, including at Mitch Marner and John Tavares, as the pair registered just zero and two shots, respectively.

That was an unacceptable performance from Marner. You wanted big money and you got big money, it's time to start delivering when it matters. So frustrating.

Freddy had a great game from an overall standpoint and the Leafs wasted it.

In the post-game press conference, Matthews also was displeased with a question coming from the Toronto Sun’s Steve Simmons — who previously broke the news of the Leafs’ star’s positive COVID-19 test. The NHL’s policy is to announce case numbers per team, but not to identify specifc players.

Auston Matthews says to Steve Simmons when he asks a question that he doesn't appreciate a question from him and found his article about his positive test unethical.

Here is the full media availability with Morgan Rielly and Auston Matthews following the Leafs’ 2-0 loss to the Blue Jackets pic.twitter.com/lZyDuXhlHX

Frederik Andersen shared his thoughts on the lone save he didn’t make:

Frederik Andersen on Cam Atkinson's goal: "I saw him coming on the wing. His initial release looked to be a little bit higher and I reacted up and I made a little mistake. That cost us a goal and eventually the game."

After winning the Calder Cup with the Toronto Marlies in 2018, it was Leafs’ head coach Sheldon Keefe’s first taste of the NHL postseason behind a bench.

Keefe: "I thought we played a good enough game to win today. But obviously you can't win if you don't score."

The teams head back to action in under 48 hours, with a Tuesday afternoon Game 2 matchup getting underway at 4 pm ET.