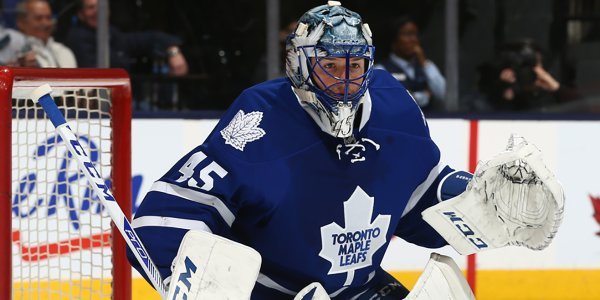 When the Toronto Maple Leafs acquired Freddy Andersen from the Anaheim Ducks – and then signed him to a starter’s contract – the writing was on the walls for Jonathan Bernier.

Jonathan Bernier traded to Anaheim for future considerations. Lou with no comment on salary retention. Will have backup before camp.

A former 1st-round pick, 27-year-old Bernier has spent the last three seasons with the Leafs.  He was originally acquired from the L.A. Kings for Ben Scrivens, Matt Frattin, and a 2nd-round pick.

Bernier had a great first season in Toronto, posting a .922 SV% in 55 games, but his numbers decreased every season, and last year he was sent to the AHL for a brief stint after an 0-8-1 start.

Beginning of 2013-14: "Bernier & Reimer are one of the strongest tandems in the league."

Having traded James Reimer to San Jose at the trade deadline last season, the Leafs will be looking at a completely new set of goaltenders to start the 2016-17 season.

Many wondered why Bernier was not included in the original trade for Andersen, but the reason appears to be a signing bonus that was due to Bernier on July 1st, which has now been paid. They couldn’t wait until after July 1st to make the Andersen deal because that would have been after the draft.

With #Leafs paying Bernier's $2M SB 7/1, some confused on cap. #NHLDucks take full $4.15M hit unless Leafs retained. No indication of that.

So essentially, the trade for Andersen was the 30th overall pick in 2016, a 2nd for 2017, and Bernier. The Leafs also may receive a conditional pick, although so far it is unclear what the condition is or even what pick(s) it would be.

It could be related to Bernier signing an extension with the Ducks, or it could be performance-based, but that’s all just speculation.

While the Ducks now have their goalie to backup John Gibson, the Leafs now need a backup for Andersen. Garrett Sparks got a brief look at the end of last season, but I think the team is looking for someone a little more qualified.

Lamoriello indicated the #Leafs will be shopping for a backup goalie. Look to a team like New Jersey.

The Maple Leafs have options when it comes to backup goalies. They could look to make a trade for a backup from another team. Perhaps Lou Lamoriello looks to his former team to acquire Keith Kinkaid or Scott Wedgewood.

They could also choose to sign a free agent goalie, which seems like the more logical choice. Why give up assets when there are quality backups available in free agency. Jhonas Enroth is a solid backup, and is coming off a career-high .922 SV% in 16 games with the Kings.

Plus, it’d be somewhat ironic to have the latest Kings backup replace the former Kings backup.