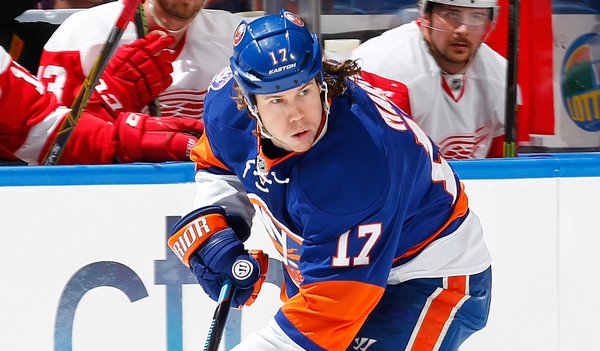 The Toronto Maple Leafs have signed forward Matt Martin to a four-year deal worth $2.5 million annually.

Martin has played six seasons in the NHL, all with the New York Islanders. The 27-year-old from Windsor put up ten goals and nine assists to go with his 119 PIMs in 80 games last season.

Martin has made his career off of being a physical force on the ice, protecting his teammates, and making life harder on the opponent.

Over the past two seasons Matt Martin has the 2nd best Corsi Against relative to his team in the league. Between Bergeron and D. Sedin.

For a Leafs team next season that will likely be littered with young players, having a guy like Martin in the line-up will certainly hold value, but it’s fair to wonder if he’s worth $2.5 million per season.

Martin’s new contract puts him in comparable range with guys like Derek Dorsett, Michael Raffl, and Dale Weise in both dollars and playstyle. The problem is that all those other guys have each hit 20 points in a season at least twice, and 25 at least once. Martin has never had more than his 19 from last season.

The other potential issue with the contract is its four year term. The cap hit of $2.5M wouldn’t be an issue if it was only for one or two seasons, but Martin is now signed through 2019-20. Only Frederic Andersen, Nazem Kadri, and Morgan Reilly are signed for longer.

The Leafs may not have a cap issue now, but when new deals are needed for guys like William Nylander and Auston Matthews, that $2.5 million could make a difference.

All in all, this signing should certainly make life easier on the younger Leafs players next season. Let’s just hope it doesn’t make life harder in the future.