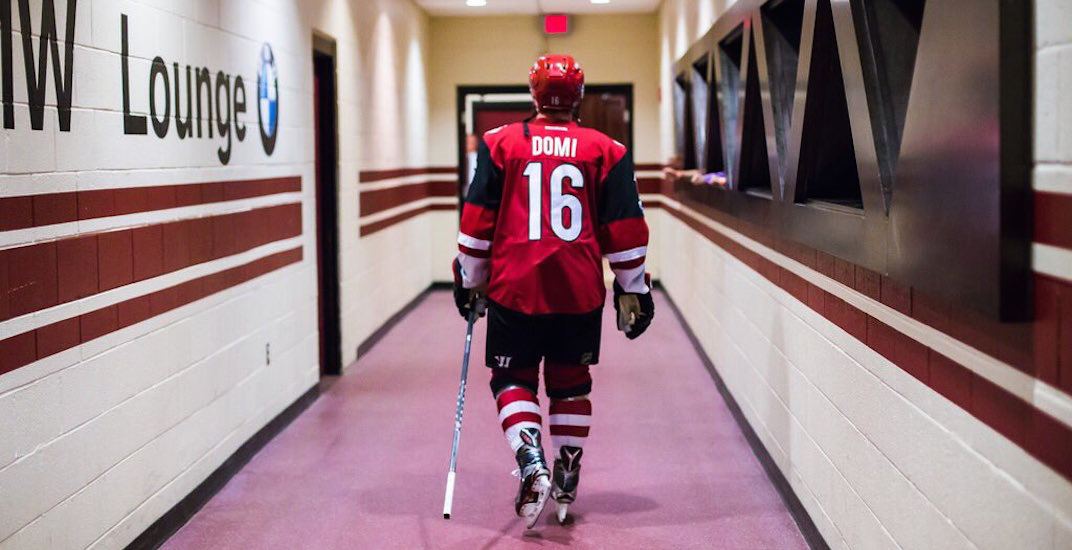 As the February 26 NHL trade deadline approaches, more and more players are being rumoured to be on the move.

The latest is Arizona Coyotes forward Max Domi, who is reportedly available for the right price. Domi is an interesting option in the sense that he’s still only 22 years old and teams may believe he has untapped potential, although he’s underwhelmed since an impressive rookie season when he scored 18 goals.

Keep in mind, though, Domi isn’t exactly playing on a roster stocked full of talent. The Coyotes are perennial cellar dwellers and one has to ponder what he could accomplish if he was in a better situation. That means teams like the Toronto Maple Leafs that are playoff bound should look into acquiring the youngster to help out in a postseason run.

A former first round pick, Domi isn’t big (just 5-foot-10 and 198 pounds), but he plays big. Sound familiar (more about that later).

Here are three reasons why it makes sense for the Leafs to bring in Domi:

1. You can never have enough forward depth in the playoffs

As I’ve written about before, the Leafs certainly could use a defenceman, but they also shouldn’t get complacent about their forward depth.

Toronto’s offence has struggled at times with Auston Matthews sidelined and it wouldn’t take much for another top-six forward to go down and quickly create an issue where lesser players are forced into more minutes. Mike Babcock said recently he is hoping the team can play well enough to force Lou Lamoriello to make a deal.

“Never been on a team that didn’t need more,” Babcock said, according to Chris Johnston of Sportsnet.

Even with players like Josh Leivo and Nikita Soshnikov waiting to get into the lineup, a player like Domi, who is a former first-round pick, would be an upgrade over both of those. Adding Domi could continue to keep players like Matt Martin out of the lineup and push Connor Brown and Leo Komarov down to the fourth line, making the Leafs more difficult to defend.

Domi might have a little extra motivation if he joined the Leafs, considering his father Tie was one of the franchise’s most popular players.

The atmosphere in Toronto would certainly be much more intense than that of Phoenix, and playing in a major hockey market might inspire Domi and rejuvenate his career. Domi would also be playing with a plethora of young talent and would have plenty of opportunities to maximize his skillset and produce offensively.

Having a chance to go on a playoff run in the same city his father did would no doubt mean a lot to Domi.

The Leafs likely wouldn’t have to give up a ton to get Domi, given that he’s struggled to recapture the form that turned heads when he was a rookie.

Leivo, who isn’t playing anyway at the moment, has already hinted at wanting a trade, or at the very least to get on the ice more. Leivo and a draft pick might be enough to bring Domi to Toronto, as it didn’t take much for the Chicago Blackhawks to pry Anthony Duclair away from Arizona earlier this season.