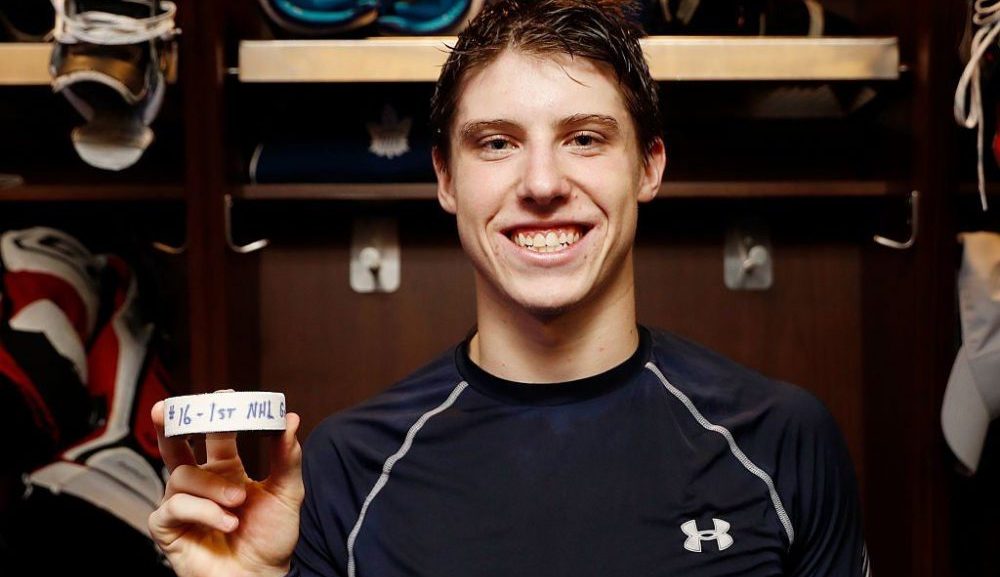 It’s not every day that a player is compared to the likes of Patrick Kane and has the potential to actually live up to it.

Maple Leafs rookie Mitch Marner may be that player.

Most high profile scouts hate the idea of comparing a young prospect to an already established NHLer. Sure, it’s a good way for the average fan to get a read of what type of player they’re like before they get to the big leagues, but it also puts a tremendous amount of pressure on them to perform.

It’s still early, but the Markham, Ontario native’s career with the Toronto Maple Leafs has shown flashes of excellence. He was dominant with the OHL’s London Knights, he’s made an impact internationally for Canada and made the Minor Midget ranks look like a children’s sandbox with the Don Mills Flyers.

But what makes him so good?

Like his new friend William Nylander, Marner possesses a great amount of speed that made him such a lethal force in the OHL.

The OHL is a quick league, so to be able to blow by top-end defenders with ease and make them pay, made him such a dangerous threat on every single shift. He’s not just fast in the first 40 minutes, either. He knows when to use his speed effectively so that he can kill you when the game is close late in the going.

His undersized build is a big reason why he’s so swift, but it also helps that he doesn’t waste any time with his specific movements. He doesn’t use too much of a stride when he skates and his passes and shots are always a highlight of his game.

In recent years, forwards on the Leafs have struggled with their two-way game. With a weaker defensive core like Toronto has, it’s refreshing to see their younger stars playing well in their own zone. Whether it be Nazem Kadri’s improved performance in a more two-way role or Auston Matthews’ overall rounded game, they’re turning into a stronger multi-talented team.

Marner is no exception. He’s pesky, he isn’t afraid to get aggressive around the net and has a tremendous ability to clog shooting lanes. His speed also forces the opposition to make quick moves or be left behind.

Marner simply has it all. His vision has typically been the most talked about asset to his game, and that’s no secret. Marner can make plays out of almost nothing and has a dominant ability to make a game changing decision that results in a victory for his team.

His wrist shot is such an underrated part of his game, which could be due to the fact that Connor McDavid and Jack Eichel were drafted ahead of them with their dynamite of a release.

While some people believe the Leafs are a while away from a Stanley Cup birth, Marner’s strength in big-moment games is unquestioned. Whether it be internationally with Canada at the Under-17’s or at the Ivan Hlinka tournament in 2014, Marner shows up when you need him most. He did get 14 points in just four Memorial Cup games last year, a season that saw him win the MVP for the Memorial Cup and the OHL playoffs, among other awards.

The best is yet to come

One thing is for sure: Marner won’t play at the World Juniors. There wasn’t much of a chance to start with, but he would have been Canada’s best player if given the chance this year.

But for Leaf fans, there’s so much to get excited about. Already a member of the second power play unit, Marner has shown great strides in 5-on-5 action with Tyler Bozak and James van Riemsdyk, one of the more underrated scoring lines in the Atlantic Division. In fact, the top three scorers on the Leafs come from the second line, with Marner sitting in second place with 15 points in 16 games.

Sure, people knock him about his lack of size, and in a league where players are bigger and stronger than ever before, it can be a valid concern. But do you really think coach Mike Babcock would put him in a situation where he’d get physically intimidated? Likely not, and after having defensive giants Chris Martenet, Tyler Nother and Nicolas Mattinen helping out with the London Knights, you can bet Toronto will do what it takes to protect one of their treasured young stars.

Marner is apart of the major young resurgence that has gotten fans excited for the first time in over ten years. The team is stacked with talented forwards that can score in any situation, and that can put a smile on the face of any fan, new or old.