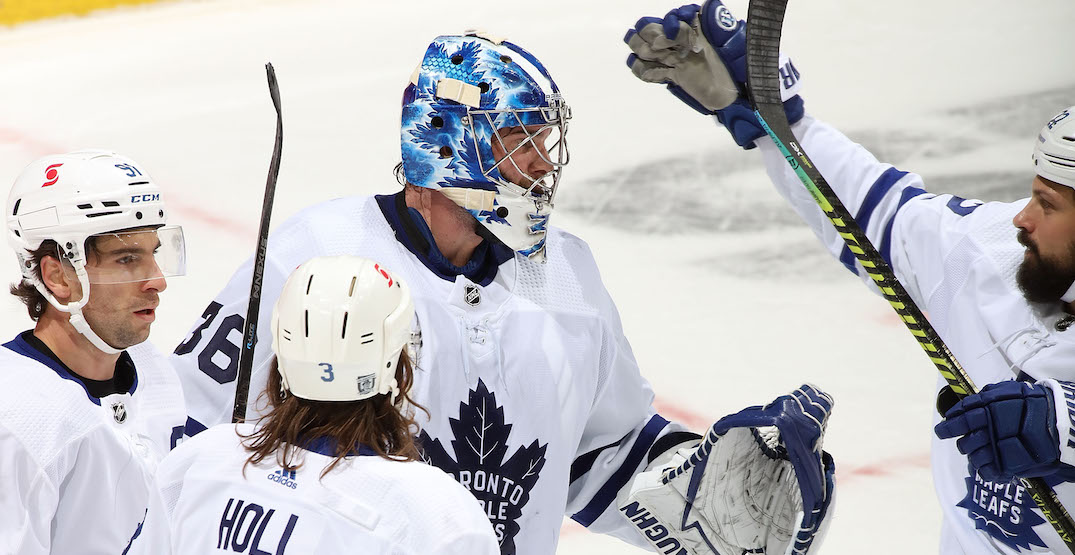 The Toronto Maple Leafs have found their security blanket in the net.

Toronto defeated the Calgary Flames 3-2 on Sunday, helped by great play from their goalie. Backup Jack Campbell stopped 31 of 33 shots on route to the victory. He kept his poise and became a brick wall when the situation demanded it. He played so well that his teammates were raving about him after the game.

“(Campbell) was an absolute rockstar for us tonight, he made some big saves,” Auston Matthews said postgame to reporters. “He was a brick wall for us.”

“Campbell was our best player tonight for sure,” Wayne Simmonds said.

“I feel great,” Campbell said post-game. “The boys played really well and it’s just huge to come out of this barn with two points.”

His positive attitude is what has endured himself to Maple Leafs fans since he arrived in T.O.

The 29-year-old came over to the Maple Leafs last season in a trade with the Los Angeles Kings. In the eight games he has played with the team since the trade, Campbell has put up a 5-2-1 record with a 2.31 GAA, and a .919 save percentage.

It’s early, but Campbell has proven to be reliable backup this season, winning both of his starts and posting a .923 save percentage.

A reliable backup has been something the Leafs have been missing in recent years, as they’ve had revolving door of backups to Andersen. The team initially had Curtis McElhinney as their No. 2 man, and he was very serviceable for the team, most notably, helping the team beat the Pittsburgh Penguins back in 2017 to break their four-year drought of missing the playoffs.

However, the team let McElhinney go following the 2017-18 season as they wanted to work in their AHL goalie Garret Sparks. The Toronto Marlies were coming off a championship with Sparks being a key cog in leading that team to championship glory.

When Sparks got to the NHL, he became very inconsistent. He had an 8-9 record with the big club as well as a GAA above three, and was let go after only one season. The next backup came in the form of Michael Hutchinson. However, he did not fare any better. The 30-year-old put up a 4-9 record with a GAA at 3.66 and a save percentage that was below 0.900 at 0.866.

So when the Maple Leafs made that trade for Campbell, the team tried to find some stability when Andersen had some rest days. Safe to say that now, the team is thrilled with the results so far.