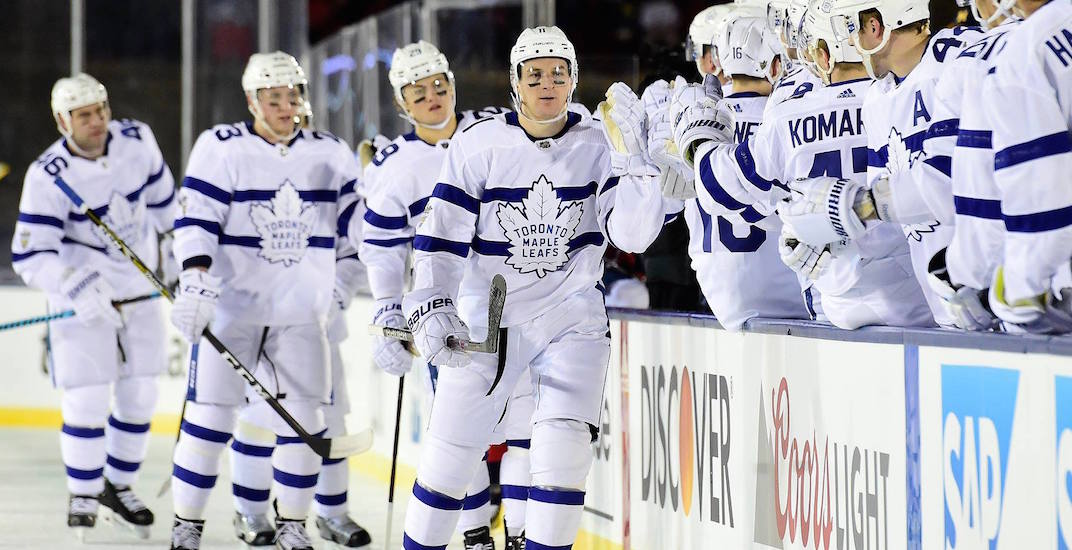 Not many teams in the National Hockey League have a more classic look than the Toronto Maple Leafs.

An original six team, their brand is iconic. So when their outdoor game against the Washington Capitals on Saturday came around, you knew they’d come up with something special to wear.

Boy, did they ever.

The Leafs created quite the stir online, as fans were greeted to the whitest damn uniforms they’ve ever seen.

Fans are used to seeing the Maple Leafs in white jerseys with white socks, but the white gloves and pants made for sensory overload for some given they play on, you know, WHITE ice.

It was like they were camouflaged into the ice for some.

Here are some of the best reactions online, starting with the hilarious negative ones:

#TMLTalk Well now that the game is passed i can honestly say that i think the all white outfits were a disadvantage for the team #StadiumSeries Watching from home i couldnt even see them out there blending in with the ice, how were they supposed to see who to pass to? #leafs pic.twitter.com/lXjhqniR2r

Anyone else finding the #Leafs white uniforms hard on the eyes? #StadiumSeries pic.twitter.com/73LaJp2LQg

So what if it starts snowing withese white jerseys? #marcopolo #Leafs

Whose genius idea were these all-white #Leafs uniforms? Perfect camouflage against the white ice. #StadiumSeries #wherearethey

Love the leafs but their bright white jerseys got me like….. #stadiumseries #TMLtalk #Leafs pic.twitter.com/v84O9xNA7q

Hard to see the positioning of the #Leafs in the white uni's and PANTS on TV… I question the wisdom from a viewers experience.

Who wears all white to play hockey??? #leafs

Remember when the #Leafs were blue and white?
Ya I do too #TMLTalk #NHLStadiumSeries

Maybe it was hard for Leafs players to see each other, because they lost the game 5-2.

Not everyone hated the look though:

I like the Leafs jerseys. Not sure why they have to wear white pants as well. #StadiumSeries #Leafs

#Leafs in all white look GREAT!

This summed it up best:

The #Leafs all white attires are…. something else #TMLTalk