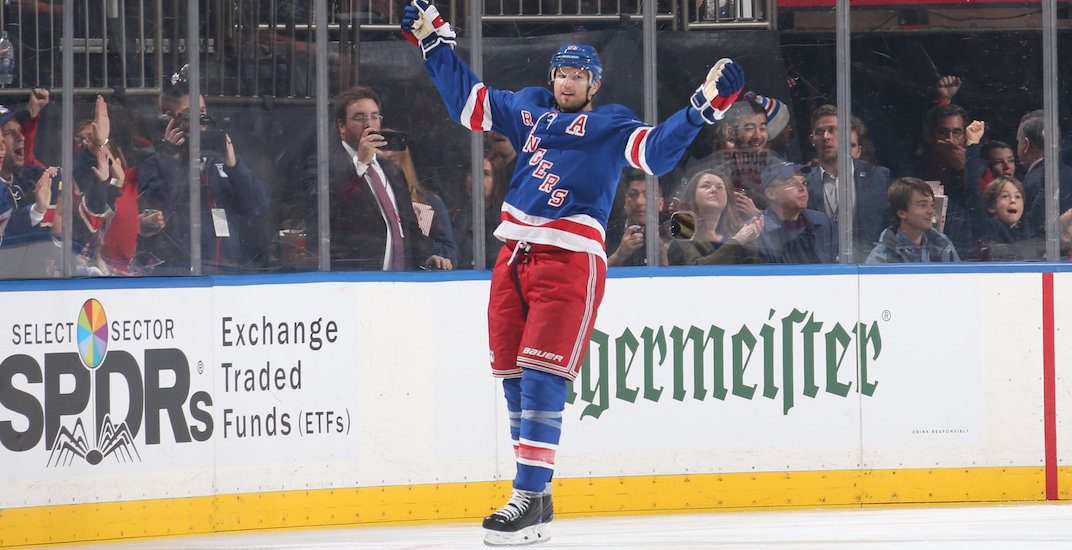 The New York Rangers are looking to trade forward Rick Nash and he’s willing to come to Toronto, putting the Maple Leafs as one of the teams on his trade list. The 33-year old is in the final year of an eight-year contract, which allows him to submit a list of 12 teams to which he’d accept a trade, as per his modified no-trade clause.

While the Rangers are currently sitting just two points out of a playoff spot, it doesn’t appear like the organization is content with just being able to make it into a first round-matchup where they’d be coming in as an underdog.

Last week, the Rangers’ management put out this letter, seemingly preparing their fanbase for a trade deadline sale.

A Message from Glen Sather and Jeff Gorton. pic.twitter.com/Q56CXS8vDc

Nash has been a key part of the Rangers organization since the 2012-13 season, where he came over in a trade from the Columbus Blue Jackets. His pedigree is obvious – a former first overall pick, two Olympic gold medals, three 40-goal seasons, and 433 career goals in the NHL to date. Over his career, he’s been named to the All-Star game six times.

And with the Rangers organization outwardly stating they’re willing to part with “guys we all care about and respect”, Nash’s name has risen to the top as a piece that’s very likely to be in trade talks heading into the February 26th trade deadline.

However, despite the fact he may have placed Toronto as a potential destination, there is no real rationale for the Leafs behind bringing Nash to his home province. Here’s three reasons why the Leafs would be best to steer clear of Nash moving forward.

TSN’s Bob McKenzie laid out the supposed asking price for Nash:  a first-round draft pick, a top prospect, and another “lesser player or prospect or pick.”

With Nash making $7.8 million this season, his cap hit definitely limits the options as to where he’d be able to wind up.  It’s probable to think the Rangers would likely be willing to retain some of Nash’s salary – after all, there’s few teams who can slot a contract like that into their lineup immediately.

Assuming the Rangers were willing to eat half of the salary in exchange for a sizeable trade package coming the other way, the Leafs could theoretically slot in Nash to their lineup.

But if the Leafs were to fulfill the asking price by the letter, it’s not an easy task to do. In terms of top prospects, the Leafs have just one first-round draft-pick in their system who’s yet to make it to the NHL: defenceman Timothy Liljegren, their top pick in 2017. While they do have the first round draft pick in this year’s upcoming draft available to trade, trading their first round picks in consecutive drafts for an expiring forward’s contract would be a big dent in the team’s prospect cupboard.

While he’s been a star ever since his 41-goal sophomore season in 2003-04, Nash’s value as an offensive player has dwindled over the past three seasons.  Simply put, Nash is just not quite the player he used to be. While he sits second among ice time amongst Rangers forwards, his 27 points in this season sit sixth on the roster.

His stats this year as a first-line player (17 goals, 10 assists in 56 games) compare eerily similar to the Leafs’ Patrick Marleau, who’s registered 18 goals and 11 assists in 58 games while on the Leafs’ second line. Nash’s current point totals would place him 11th in Leafs’ scoring, and behind three other left wings in Marleau, Zach Hyman, and James van Riemsdyk. While pure point totals don’t reveal everything about a player, it begs the question where the Leafs would be able slot Nash into their lineup.

If the Leafs were to acquire Nash and keep the three aforementioned left wingers, it’d create a roster jam with a qualified top-six forward likely being relegated to the team’s fourth line.

If they were to include one of the three in the trade, it would seem that the Leafs would be trading away a player who’s offensive output is currently at least on par, if not better than Nash’s, not to mention the added pieces in the trade scenario mentioned above.

Just because the Leafs could make a push for Rick Nash, doing so wouldn’t really fit in with the team’s long-term goals. With the Leafs currently sitting third in the NHL in goals scored this season, it seems unlikely they’d have a need for a winger they’d only have control of for the remainder of the season. Even if the Leafs were to negotiate down the supposed asking price, they’d still be trading a noticeable part of their future for what is already a position of strength. If the Leafs do decide to be active buyers at the trade deadline, it seems much more likely they’d be adding a defenceman or forward with a lower acquisition cost.

While making a splash for a household name like Nash would be a headline-grabbing move, it just doesn’t appear to be in the Leafs’ best interests. A Rick Nash to Toronto trade may sell a few jerseys and may excite a few old memories, but overall, it wouldn’t make much sense for the Blue & White.