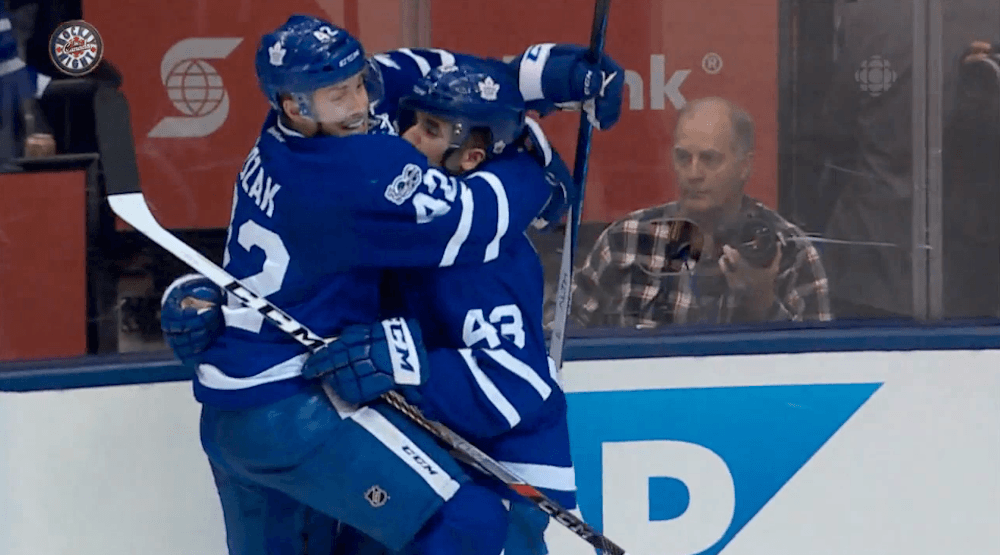 Tyler Bozak was the hero for the Maple Leafs on Monday, as the longtime Leaf scored 1:37 into overtime to give Toronto a 2-1 series lead against the Washington Capitals.

It was the third straight OT game between the two teams in a series that has become an instant classic.

Yes, he was there.

Less than three minutes into the game, the Caps got the all important first goal. Nicklas Backstrom converted on a centring pass from Nate Schmidt to make the game 1-0. The goal was the result of miscommunication from Nikita Zaitsev (who made his return to the lineup) and James van Riemsdyk.

Less than five minutes in, Alex Ovechkin scored on a one-timer. Just like that it was 2-0.

With under six minutes left in the first period, Toronto’s star gave them hope. Following a physical shift by Nazem Kadri’s line, Auston Matthews scored the first playoff goal of his career.

Matthews got a lucky bounce off a Capitals player, but did well to track the puck and put it past Capitals goalie Braden Holtby.

After Evgeny Kuznetsov scored to make it 3-1 less than six minutes into the second, Washington had a glorious chance to put the game away. An undisciplined penalty by Matt Martin added to an original penalty to Matt Hunwick, putting the Leafs down 5-on-3 for a full two-minute power play.

But instead of wilting, the Leafs tightened up defensively, giving Washington very little to work with, and killed off both penalties.

Despite getting outshot 15-8 in the second period, the play of goaltender Frederik Andersen gave them a chance.

Andersen’s teammates rewarded for his efforts, tying the game up in the final five minutes of the second period.

Note the great work by Connor Brown creating havoc in front of the net.

Then, with 40 seconds left in the period, the Leafs’ youngsters get another lunchpail goal.

Zach Hyman did great work on the forecheck, drawing two Capitals defencemen with him, as Matthews found the puck first, dishing to William Nylander in front. Tie game and bedlam at the ACC.

In fact, the best chance to get the lead was by Washington, when Kuznetsov hit the post with just over four minutes left in regulation.

But the critical play of the period came when Lars Eller was called for high sticking with 16 seconds left in the period, giving the Leafs a power play that would carry over into overtime.

The Leafs made Washington pay late in their power play, as Kadri fired a half shot/half pass to Bozak who deflected home the winner past Holtby.