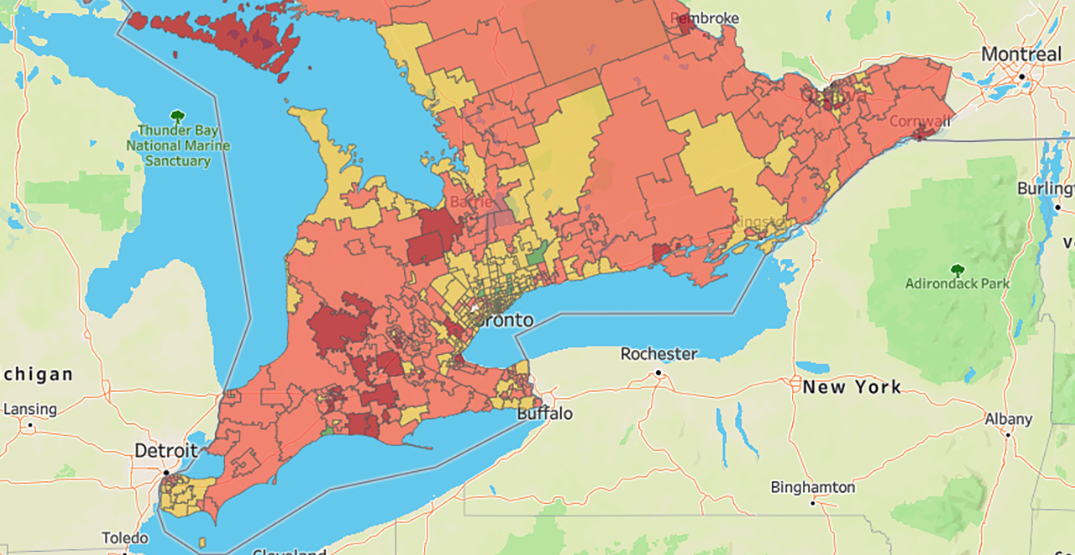 A retired statistician has created a new interactive map that tracks first dose COVID-19 vaccination rates across Ontario by neighbourhood.

Bill Comeau published his Tableau map in early May to help Ontarians understand which regions have the best and worst vaccine coverage.

There are also some new enhancements to the interactive postal code maps for test positivity and first dose %, including postal code (FSA) highlighters and a new postal code ranking chart for first doses.https://t.co/Q6nbjefgDO pic.twitter.com/qgMfGRx4NS

Areas with very low vaccination coverage are labelled red. Places with higher vaccination rates are shaded from yellow to green. 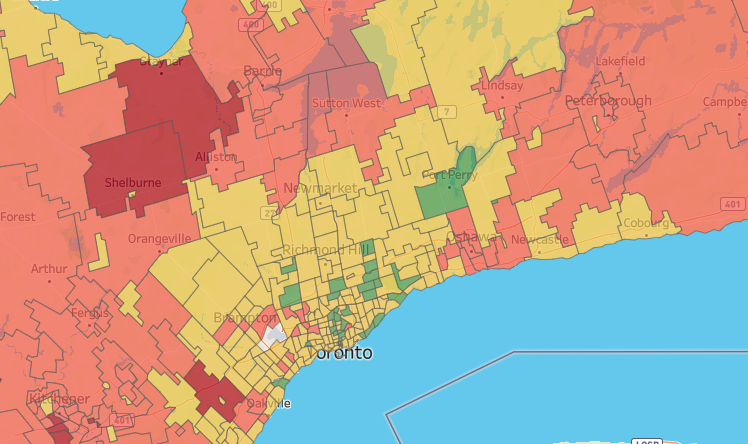 Fewer people in some Brampton areas have their first dose. Those postal codes are coloured orange (40% to 50% of residents have a first dose).

Many of the smaller cities surrounding Toronto also have lower vaccine coverage, and so do areas in Northern Ontario. Outside of Toronto, much of the province is coloured orange and red (less than 40% of people have a first dose), indicating low first dose coverage outside the populous Greater Toronto Area.

The province prioritized several hotspot postal codes in the GTA for vaccination this spring because of high COVID-19 transmission rates. Pop-up clinics were set up to get shots in arms quickly. Now Peel’s medical officer of health, Dr. Lawrence Loh, is calling for a similar prioritization for second doses because of a concerning rise in Delta variant cases.

Comeau, the man behind the vaccination rate tracking map, is a self-taught Tableau user with a Master’s degree in mathematical statistics from the University of Waterloo. He uses publicly accessible COVID-19 data and shares his data visualizations on Twitter. Previously, he used his skills at work and to track sports data.

The ‘2 dose gap’ is temporary. More than 50% should have a second dose by the end of July. If we can bridge this gap, we will reach a safer Ontario and dampen any Delta wave. If we allow Delta to escalate now, the challenges will be much greater. We have seen this movie before. pic.twitter.com/DAOzyJcBOu

Vaccination rate milestones are tied to further openings under Ontario’s reopening plan. The province is scheduled to allow patio dining, non-essential retail, and outdoor gatherings of up to 10 people by the week of June 14.