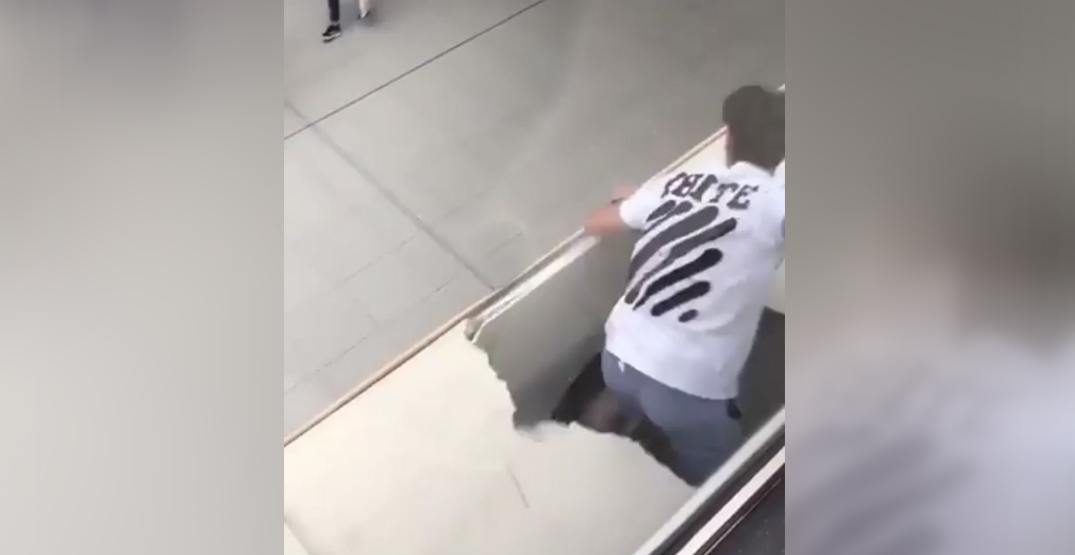 A man fell through the ceiling at Toronto’s Eaton Centre while trying to retrieve his keys.

Have a read at that one more time before we continue.

In a video circulating on Reddit, posted on the subreddit called, “What Could Possibly Go Wrong?” (Spoiler alert: a lot of things), a young shopper appears to have dropped his keys on the surface of a wide ledge on the other side of an upper floor railing.

The ledge appears to be the ceiling of a temporary hoarding placed in front of a store that’s under construction on the lower floor.

If only life were that simple. We’ll let you see for yourself what happens next:

… if I drop my keys from r/Whatcouldgowrong

In the video, the man proceeds to climb over the railing and step on to what he soon realizes is a ledge made out of drywall, which begins to crack under his first step. Time freezes as the man realizes his fate, and soon the entire surface cracks, causing him to plummet directly through the drywall into the abyss below, followed by a few ceiling fragments raining down from the damage.

His cameraman, like any good friend, doesn’t even flinch, and tries instead to get a better look.

We have no word on if the shopper sustained any injuries during the incident. Passers-by on the lower floor quickly rushed to open the construction door (which seemingly hits our disoriented stuntman on the other side), and thankfully, he is then seen walking out the door himself, with what appears to be keys in hand.

A spokesperson with Cadillac Fairview, the parent company that owns the Eaton Centre, told Daily Hive that the incident happened over the August long weekend, and makes clear the company’s policy on this behaviour.

“The safety and security of our guests, tenants and staff is our top priority, and as soon as we were made aware of this, our security staff tended to the scene immediately,” she said.

“We do not condone this behaviour that puts our patrons and guests at risk. Guests who drop or misplace personal items are asked to contact our security team to retrieve their items.”

Where is Spiderman when we need him?