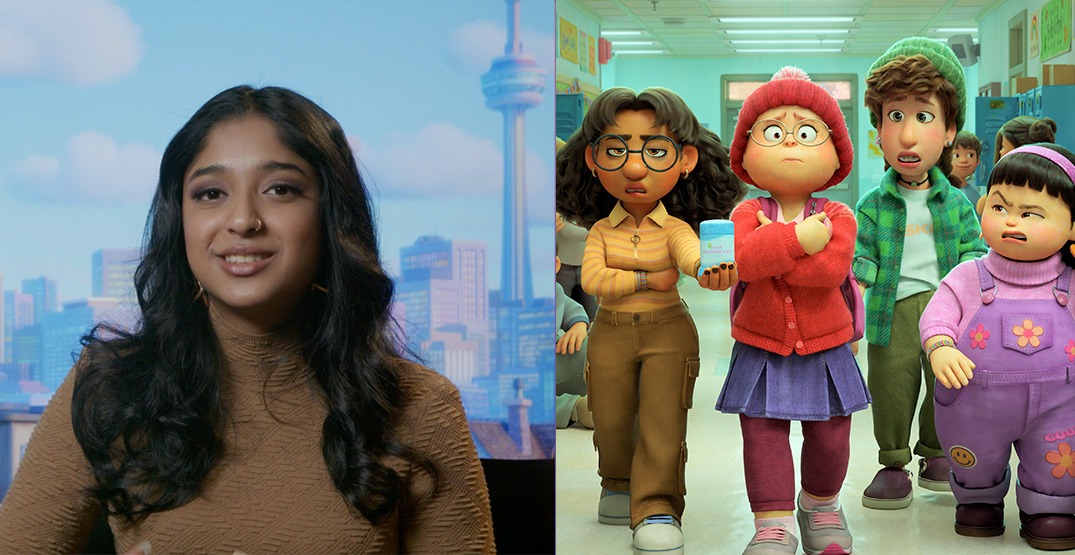 Director Domee Shi hails from Toronto’s Chinatown; Sandra Oh, who voices the main character Meilin’s slightly overbearing mother, is from Nepean, Ontario; and Hyein Park, who voices one of Meilin’s friends Abby, is also from Toronto.

Ramakrishnan was equally ecstatic to join the cast as Priya, Meilin’s cool and deadpan best friend. The actor told Daily Hive that she recorded her audition in her bedroom in Mississauga.

“I was just like lying on my bed with my phone in hand, voice memo like ‘Okay, I got this,'” said Ramakrishnan.

The Tamil Canadian actress got her start starring in Netflix’s hit show Never Have I Ever, created by Mindy Kaling, which is releasing its third season this summer and has been renewed for a fourth one.

Turning Red is Ramakrishnan’s first foray into voice acting, so she’s glad it’s a story that hits “close to home.”

“I can’t ask for a better movie to join the Pixar family with,” said Ramakrishnan.”It’s truly amazing how it’s a Canadian story about an Asian Canadian girl. I think that’s awesome.”

We spoke with Ramakrishnan about Toronto being in the spotlight, the importance of female friendships, and what unique Canadian experience would turn her into a giant red panda.

Toronto is almost like its own character — what about the city do you think is so inspiring?

Toronto is one of my favourite cities in the whole world. The natural diversity that I get to see when I walk down the streets of Toronto is truly reflected in the movie. No character of colour is just used as a joke or used as just a show-and-tell kind of display.

It’s that magic of the city that doesn’t get much of the spotlight and truly deserves way more than it gets.

How important is the portrayal of female friendship in the film?

I love that, nowadays, film and TV are shifting in the direction of showing positive female relationships rather than just pitting women against women and having them bicker about a guy.

I think it’s very, very important in how it shapes generations to come and their minds, but also to have us all appreciate the friendship that is between girls.

What are your favourite Toronto/Canada easter eggs in the movie?

One of my favourite moments in the movie is when a blue jay just comes by and just sits in the front of the frame. I’m like, “Ah-haha. All right, I see what you did there!”

Or like one character’s wearing a purple basketball jersey. Like, if it was set now, it would be red and black, wouldn’t it?

What early 2000s Toronto landmarks, restaurants, or hangouts that might not exist anymore do you miss most?

Sushi Sky… I miss Sushi Sky so much. I believe it was near Dundas Square. My parents would take my brother and me there all the time, and we’d both get the same tempura bento box.

When you were a teenager, where would you go to get away from things in Toronto?

Being a Mississauga gal, there are not many places you can go to if you don’t know how to drive. So, the park across the street is a good place. But that requires you to walk, and I am lazy — my bedroom’s cool.

Honestly, Square One, but yet again, you’re going have to drive, and my child self couldn’t drive to Square One.

What are your favourite restaurants in Toronto?

Fushimi Sushi is really good if you’re going back on the sushi vibes. There’s a ramen place called Oji Seichi, which is really nice.

Ruru Baked ice cream — that’s not a restaurant, but their ice cream is great. It’s like all the different unique flavours. I like the buttered popcorn one. If you go on Halloween and you dress up in costume, they’ll give you a free small scoop. I did that last year.

What Canadian icon/experience would trigger you to turn into a red panda?

If I saw Marianas Trench again and they played like their old songs, like the ones that made my middle school experience all that it was, maybe I’d panda out. Maybe I’d get a little too excited.

This interview has been edited and condensed for clarity. It was conducted a day before the film’s premiere in Toronto.