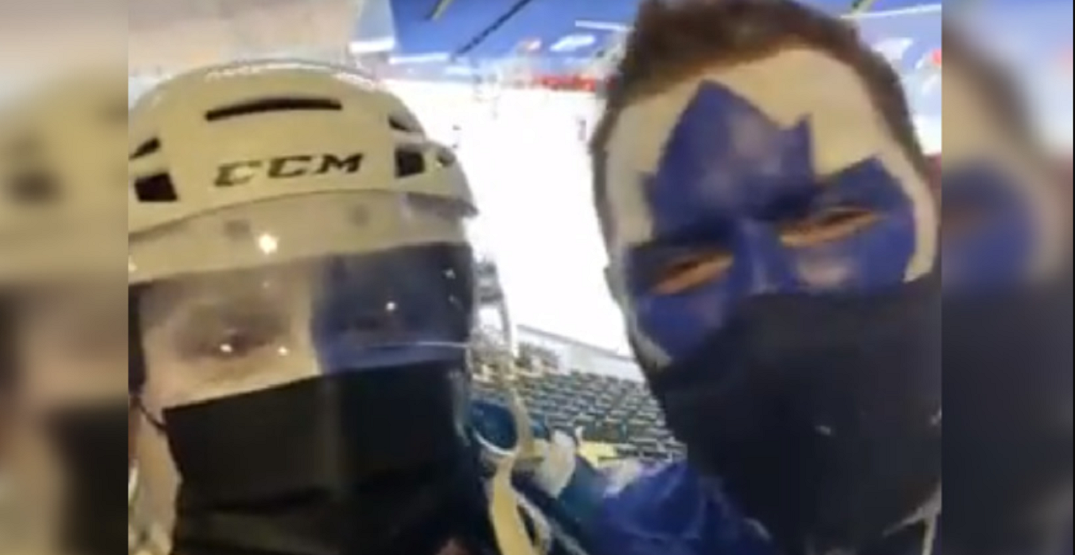 With the Toronto Maple Leafs fans returning to action yesterday, most fans were forced to watch the game on their couches due to new COVID-19 related capacity restrictions.

With Scotiabank Arena limited to a capacity of 1,000 including arena and team staff, no traditional tickets were handed out for Toronto’s 6-0 win over the Ottawa Senators.

But a pair of lucky Leafs fans got to watch the team in a mostly empty Scotiabank Arena thanks to MLSE.

Kurtis Stevenson, a Leafs fan from Alberta who had his tickets to three games in Toronto cancelled when the capacity restrictions were introduced earlier this month, posted a video on Twitter sharing his disappointment.

With a non-refundable airfare and Airbnb, Stevenson was gutted that he wouldn’t be able to catch the Leafs play in person on his first trip to Scotiabank Arena.

Word eventually got out to MLSE Vice President of Communications Dave Haggith, who hooked Stevenson up with a suite for the game to watch as a guest of the team.

Update. I Made it! At @realsports before the game as guest of @MLSEPR and @davehaggith with @LeafsMaz20 Nothing but love for the @MapleLeafs between us! #LeafsForever I AM GOING TO THE #Leafs GAME!!!GO LEAFS GO!!! dreams can come true! Cheers #leafsnation to the buds 🍻🍻 pic.twitter.com/NxLguMSipP

When Stevenson originally posted the video, games in Toronto were still planned to go ahead at 50% capacity. But it looks like, despite fan numbers being virtually zero, MLSE still kept their promise to Stevenson.

Stevenson was joined by Jason Maskalow, better known as “Dart Guy,” after a picture of his face-paint and cigarette went viral during the 2017 playoffs.

Seriously.The @MLSEPR and the @MapleLeafs truly are the greatest Franchise on earth. I will scream loud and proud for you #leafsnation as you are right by my side as I’m Having my dream come true. Thank you to all of you for being amazing people! Go Leafs! #LeafsForever 🍻🍻🍻🍻 pic.twitter.com/MZE8Q6F17h

Stevenson had a few blips along the way, including a cancelled flight the day before the game. But it all worked out, with Stevenson having a smile on his face the whole way.

WestJet waited until the last possible minute and cancelled my flight,So I’m now driving 3 hours to the next nearest airport and have booked a new flight though Air Canada that leaves at 8am. New Years spent by myself in an airport hotel room.I will not be stopped! #LeafsForever pic.twitter.com/f7H0QKCPJw

Although Monday’s Leafs game against Carolina has been postponed, it sounds like Stevenson will be in attendance once again on Wednesday night. If you hear anyone cheering on TV, it’s probably him.