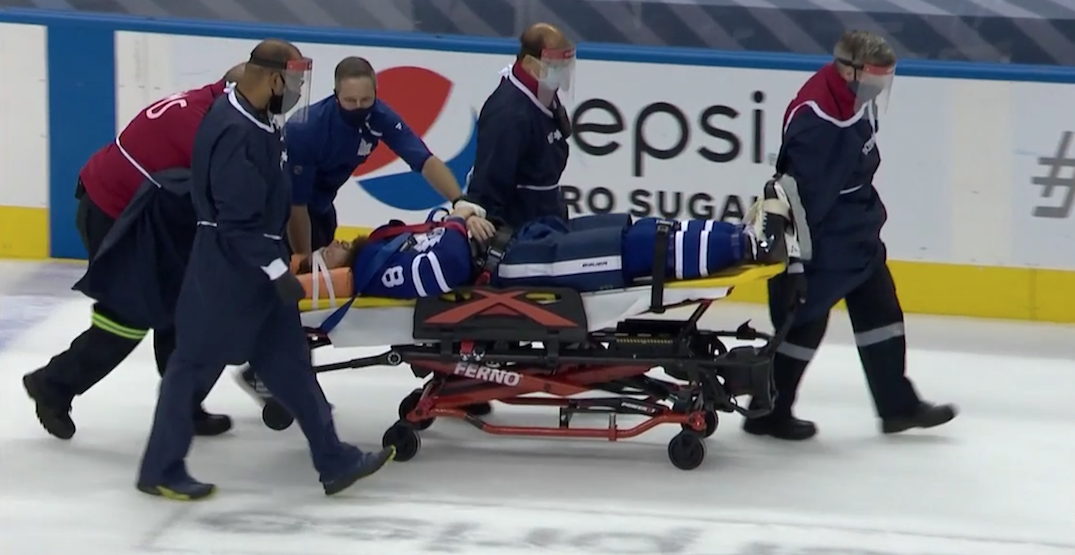 Jake Muzzin was stretchered off the ice, in what was a scary scene late in today’s 3-0 win by the Toronto Maple Leafs over the Columbus Blue Jackets.

The Leafs defenceman was crosschecked in the back by Columbus’ Pierre-Luc Dubois and fell awkwardly into the leg of Oliver Bjorkstrand.

Here’s the incident. Jake Muzzin is being stretchered off with 1:52 left in the game. #CBJ #LeafsForever pic.twitter.com/EQWrvIzweb

The Columbus Blue Jackets and Toronto Maple Leafs show support for Jake Muzzin as he is taken off the ice on a stretcher. pic.twitter.com/9qoctxBs7K

Play was halted with 1:52 left in the game, while Muzzin laid on the ice for several minutes. It was an especially eerie moment in a silent, empty Scotiabank Arena in Toronto.

Muzzin was conscious and could move his legs and arms, but the medical team on hand appeared to be paying close attention to his neck.

Maple Leafs defenceman Jake Muzzin was transported to hospital following an on-ice collision in the third period tonight. He is alert and able to move all limbs. Further updates will be provided once available.

Following the game, the Leafs said that Muzzin was taken to hospital and confirmed that he is alert and able to move all limbs.