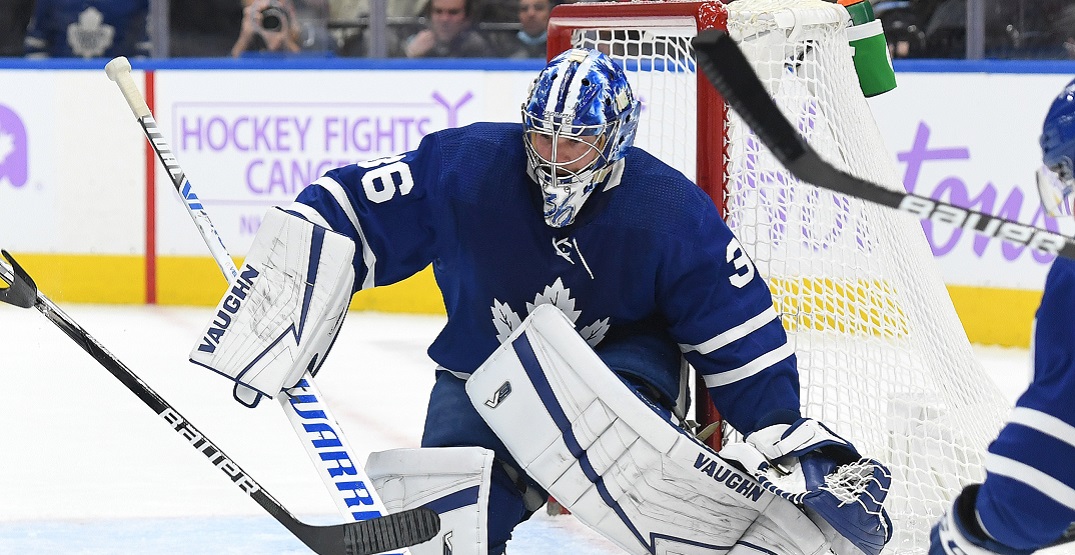 Even a year ago, the chances of Jack Campbell making the US Olympic team in 2022 would’ve seemed like the stuff of fairytales.

At the end of the 2019-20 NHL season, Campbell had played in 64 career games at age 28 — hardly the resume of an international star.

But with injuries to Frederik Andersen last season, Campbell took over the #1 job in Toronto, and hasn’t looked back.

This year, Campbell was slated to split the crease with Petr Mrazek, but Mrazek has played just twice for the club, suffering from a pair of groin injuries a little over a month into the season.

Campbell answered the call spectacularly: he’s got a league-best .944 save percentage to go along with a 10-4-1 record this year. In fact, Campbell’s .931 save percentage in his 36 games since he joined the Leafs in February 2020 is also No. 1 in the league.

With the hot start this year and his continued consistent play, Campbell is making a case that the USA should give him a call come February for the Olympics.

“He’s had a very good start,” US Olympic team head coach Mike Sullivan said last week about Campbell. “There’s been a number of conversations around the roster…. We’re going through that process behind the scenes.”

It’s a quote that doesn’t mean much in the grand scheme of things. Ultimately, actions speak louder than words. But when he’s been thrown into a starting goalie role each of the last two seasons — even if it’s been largely due to others’ injuries — it’s hard to ask for anything more than what Campbell’s given.

Who is Campbell competing against?

Barring injury, one of the goalie spots on the USA roster is likely set in stone.

Winnipeg’s Connor Hellebuyck should be a lock for the Olympic team after winning the 2019-20 Vezina award as the league’s best goaltender and following it up last season with a fourth-place performance.

Anaheim’s John Gibson is also a strong contender to make the team, with his .917 career save percentage mark tied with Hellebuyck as best among American active goalies (minimum 200 games).

And then there’s the third spot.

The USA (like everyone else) hasn’t played in a true best-on-best tournament since the 2016 World Cup of Hockey, where they trotted out Jonathan Quick, Ben Bishop, and Cory Schneider as the team’s netminders.

Schneider and Bishop last played in the NHL in 2019-20. Schneider is in the AHL and Bishop is still recovering from a 2020 knee injury. Those two are clearly out as candidates.

But after a few down years, Campbell’s former Kings teammate Quick seems to have found his stride again. He’s putting up a .939. If the USA brass is looking for the experienced veteran, Quick could be the guy to dash Campbell’s hopes.

Vancouver’s Thatcher Demko could also play his way into consideration. He’s got one of the heaviest workloads in the league so far, as his 429 saves this season sit third in the NHL. His save percentage (.905) and record (6-8-1) don’t look great, but it’s hard to imagine too many goalies performing well behind a struggling Vancouver team.

A recent fan poll run by hockey analyst JFresh put Campbell as among the fans’ picks for the roster on 50% of the ballots.

Who should be on Team USA's 2022 Olympic Roster?

Here's who you picked:

It’s all speculation at this point, and there’s no clear answer as to whether Campbell will make the Olympic team or not. But if he keeps up his strong play, the USA Hockey brass will find it difficult to ignore him when it comes to the Olympics.