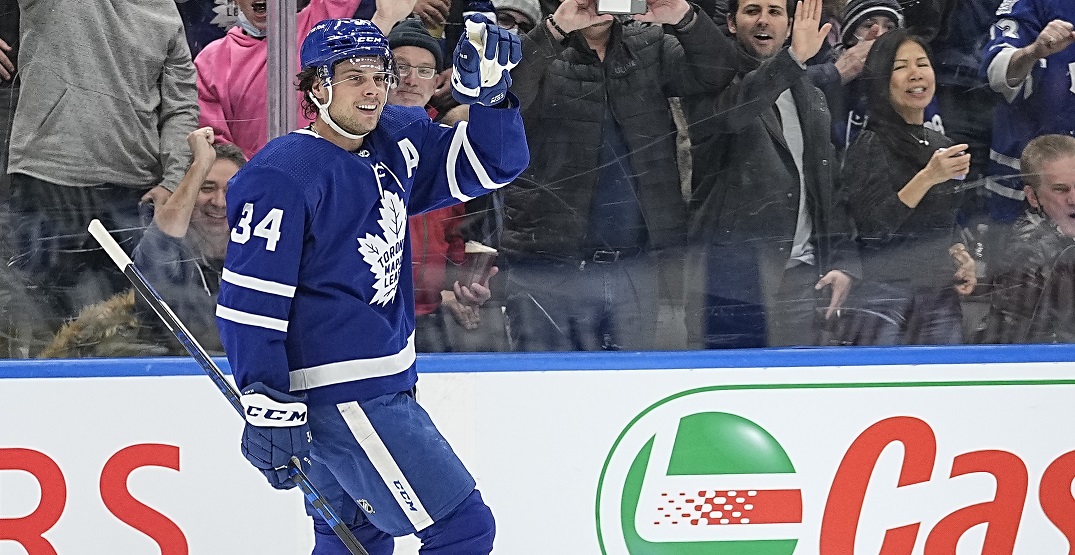 The NHL “50 goals in a season” club welcomed Auston Matthews as its newest member on Thursday night.

With a third-period empty net goal against the Winnipeg Jets, the Toronto Maple Leafs forward Matthews became the first player in the NHL this season to hit the net 50 times.

The Leafs ended up winning the game 7-3, with Timothy Liljegren adding a marker after Matthews.

Matthews is the first player to hit milestone in three NHL seasons, though Leon Draisaitl (who scored 50 in 2018-19) is sitting on 49 goals right now.  Draisaitl mentioned Wednesday night that he’d “like to beat” Matthews in the race for the NHL’s Rocket Richard Trophy as the league’s top goal-scorer.

Matthews joins Gary Leeman, Rick Vaive, and Dave Andreychuk as the only Leafs to hit 50 goals in a single season.

Matthews has now lit the lamp 249 times in his career, a remarkable achievement in just 396 games spread across six seasons. His 0.80 goals per game average entering Thursday is the highest of his career so far, while his career 0.63 goals per game mark is tops among any active player.

Matthews is the first Leafs centre in history to hit the 50-goal mark.

“I’m excited about it,” Matthews told reporters about the chance to hit the half-century mark pregame. “But it’s not something that’s at the top of my list, or the main goal right now. The main goal is for us to play really good hockey and produce wins and do what I can to help the team win.”

For the first time in 28 years, the @MapleLeafs have a 50-goal scorer. Congratulations, @AM34! 👏#NHLStats: https://t.co/avrCSV8nz9 pic.twitter.com/45NIyiFeVY

Up next on Matthews’ milestone list — after hitting the career quarter-millennium mark on his next goal— will be the Leafs’ single-season goal-scoring record. Vaive currently holds that mark, with a 54-goal season achieved back in 1981-82.