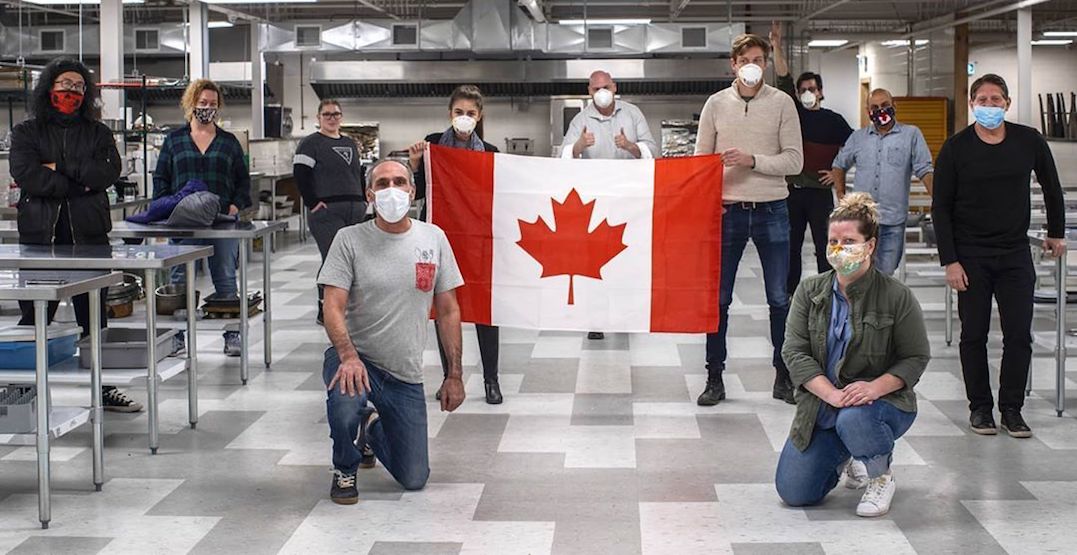 During times of need, there is immense power in learning to use what is readily available to us in order to provide differently for ourselves, and — when it’s possible — for others.

Kitchen24 has a 35,000 sq ft commercial kitchen, and the capacity to cook more than 10,000 meals each day. In the midst of COVID-19, the space’s owner, Steve Kidron, is using what he has to provide meals to the city’s most vulnerable.

The massive commercial kitchen has been collaborating with partners across the city in order to get food where it’s most needed during this time. Now, the space has launched a fundraiser with hopes of extending those efforts even further.

“When Steve first came to Toronto, he lived on the streets, having accessed the occasional garbage can to find a meal and existing with hardly anything in his pocket.”

As a response to the mass shuttering of businesses and community support organizations over recent weeks, Kidron recognized a need to feed the city. According to the campaign, this began with self-funding the making of food and, as of the date of the launch, Kitchen24 had provided over 30,000 meals to those in need.

“Since quarantine began, we started making 500-700 cooked meals daily and donating them to nursing homes and shelters throughout our community. However, we know that 500 is not enough,” reads the campaign page.

“Our facility has the capacity to create more, 24 hours a day, seven days a week, and we plan to keep on going for as long as there are mouths to feed during this pandemic.”

The campaign has been organized with a set goal of $15,000. This, the description says, will facilitate the production of thousands of meals.

As of Wednesday afternoon, $5,660 has been raised.

Self-described as “the largest shared kitchen in Ontario,” the campaign says volunteers are able to practice social distancing while mass-producing nutritious meals.

Together, with help from the community, the kitchen aims to overcome the issue of food banks closing due to issues of health and safety.

“There are many vulnerable residents throughout Toronto and surrounding areas that have lost access to social services and basic necessities due to COVID-19,” the campaign says.

“Kitchen 24 wants to be part of the solution by using our space, volunteers and resources to bring food to those who need it most.”

If you want to be a part of the Kitchen24 initiative, you can donate here. Individuals and organizations that are in need of meal services can apply here.