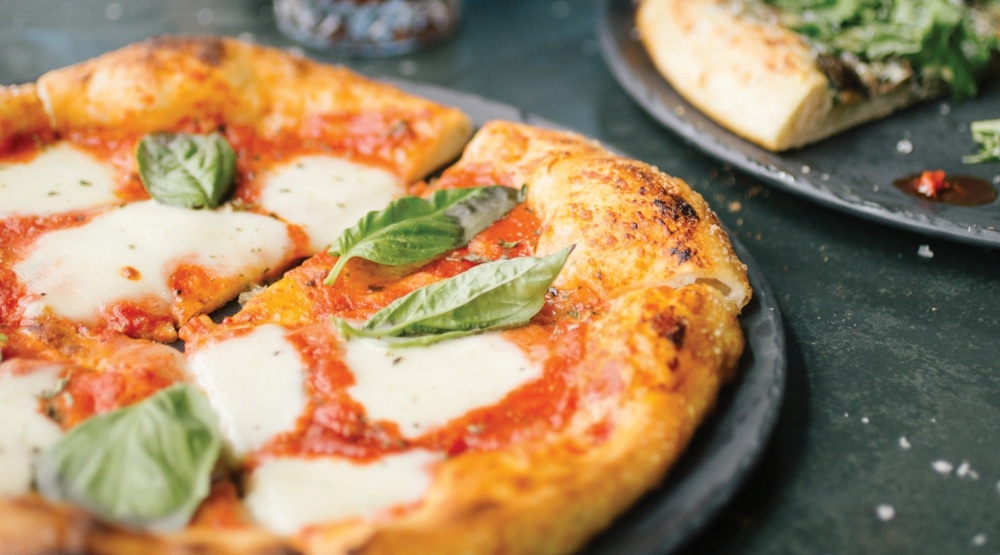 Toronto’s Financial District just gained a brand new destination for patio lunches and after work dinner and drinks. King Taps is now open on the south side of First Canadian Place.

It’s a massive 450-seat beer bar boasting two patios, 50+ craft and international draught brews, and a menu majoring in pizzas, bar snacks, and other pubby staples. It’s a first of its kind, spin-off from the restaurant group behind the Cactus Club Cafe, only this spot caters to a beer-drinking, sports-loving crowd. 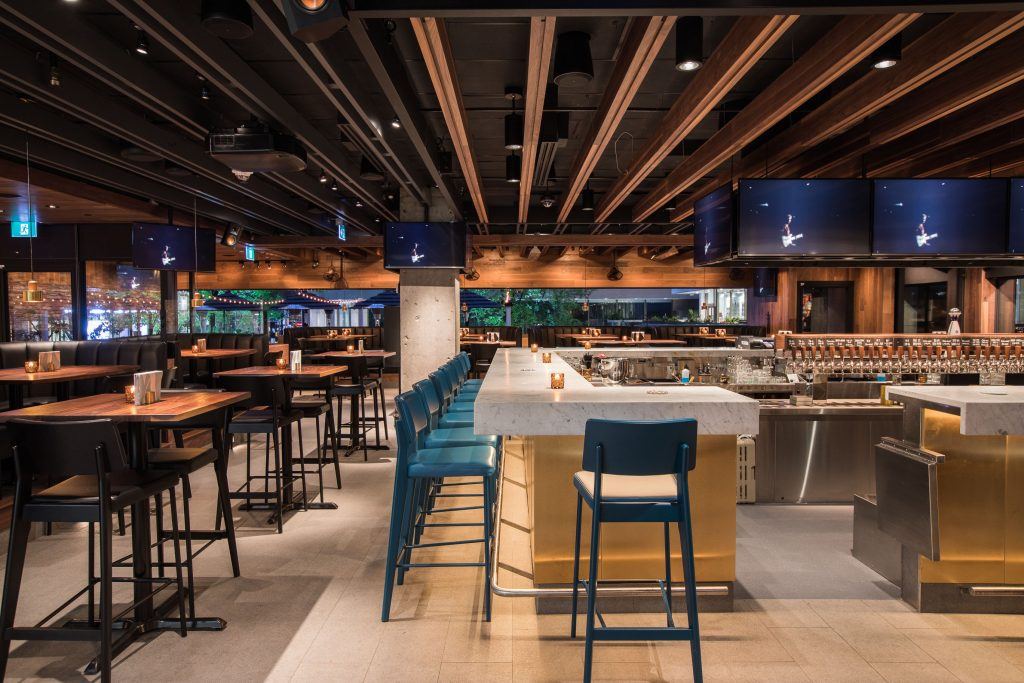 At the bar, screens overhead stream live games while the line up of 50 draught beers offers something for everyone. In addition to craft and international brands, you’ll find rotating selections and exclusive collaborations from King Taps and local breweries including a Frenchie Blanche from Rainhard and an IPA from Batch among them. 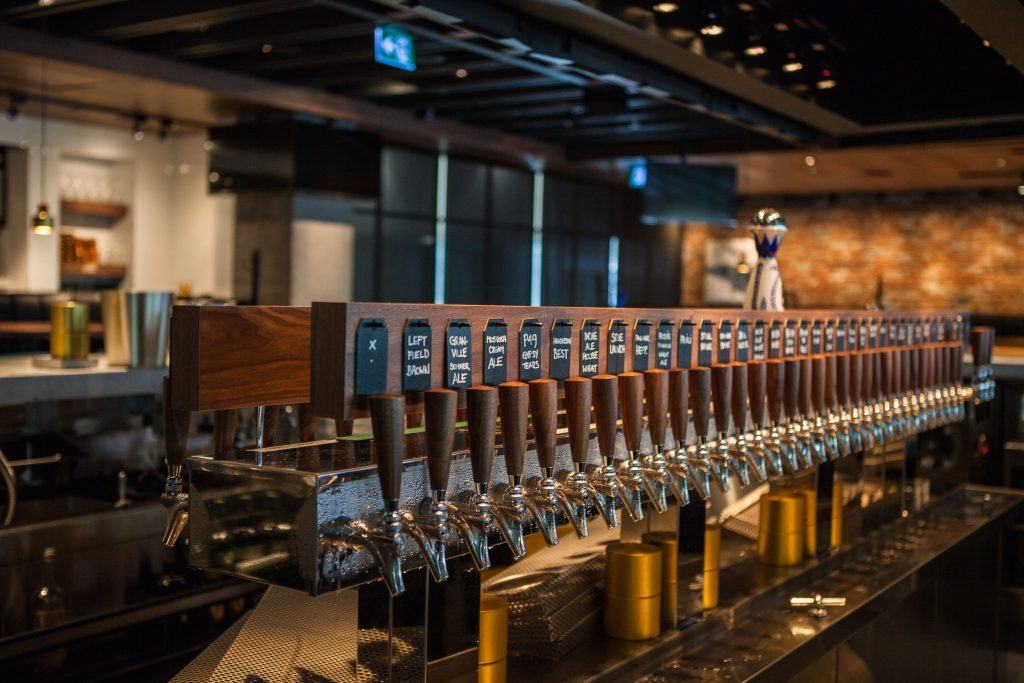 Flights of four $8.50 offer the chance to discover new favourites, though it’s easy enough to make an educated guess with a menu organized by style; lager, pilsner, wheat, stouts, sour, and so on… 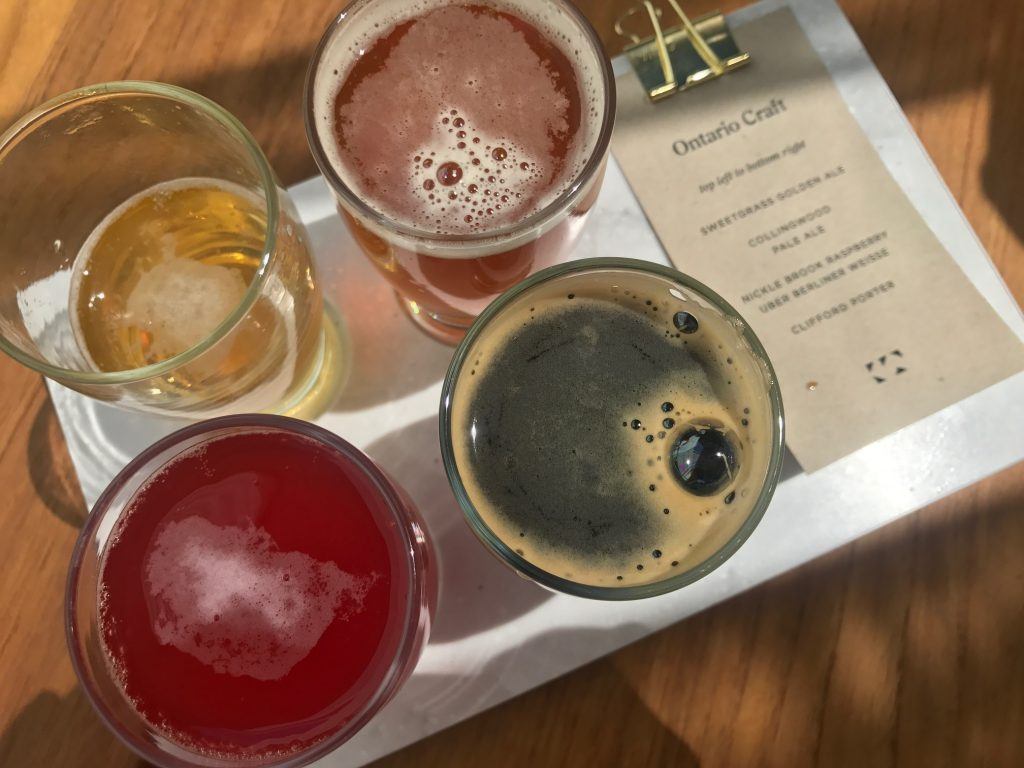 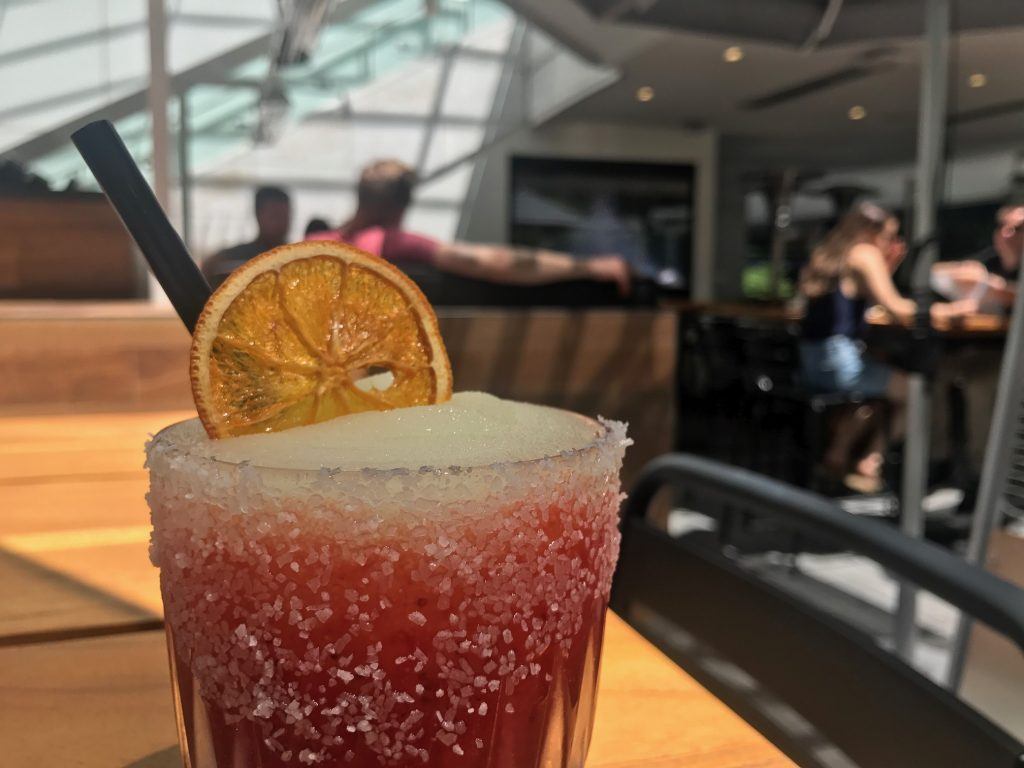 To eat, pub staples like pizza, wings, nachos, burgers, and tacos are all accounted for but there’s also a range of hearty salads, rice bowls, and steaks. 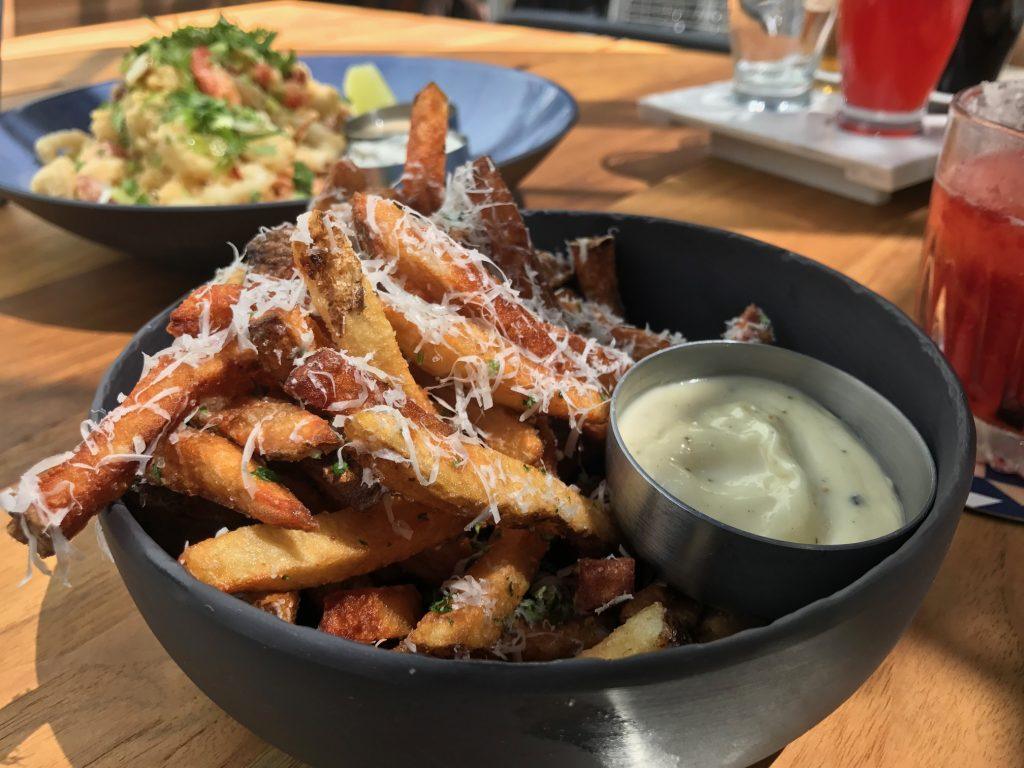 Perched at a high top on the sunny top-floor patio, it’s the baja fish tacos and truffle fries that prove popular as I witness a near constant stream of platters make their way from kitchen to table. 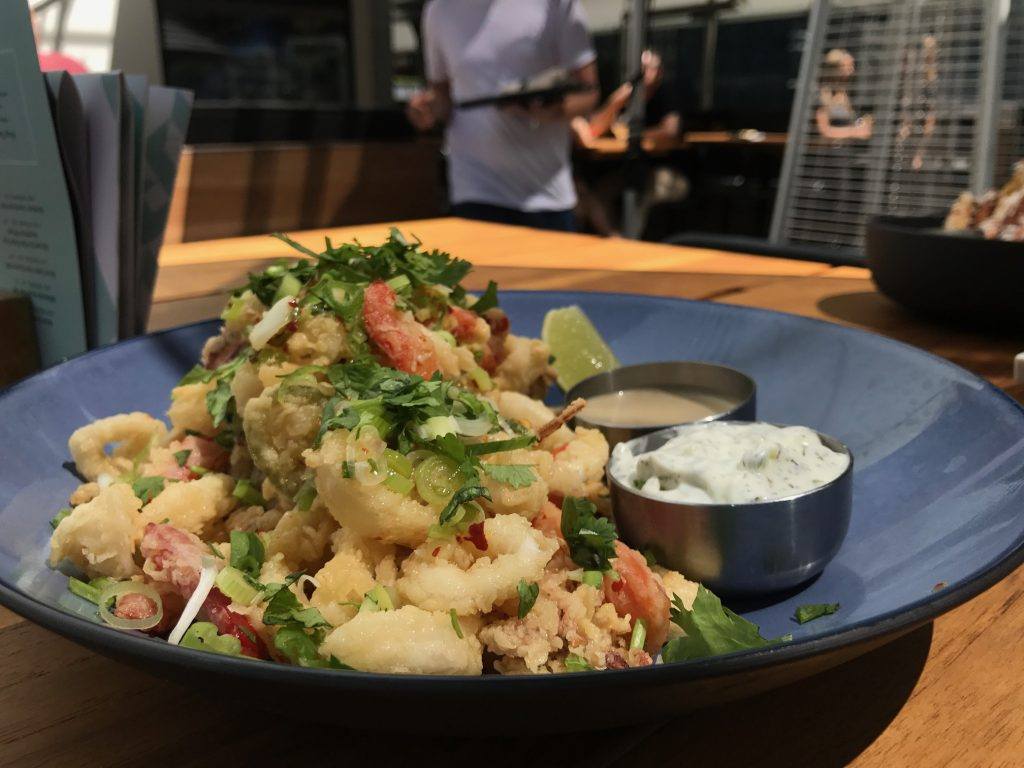 I opt for the chili squid, a mountain of lightly battered tentacles along with deep fried jalapenos and red peppers finished with handfuls of fresh herbs and scallions. Sides of tzatziki and garlic-ginger dipping sauces are included, though the later is a unanimous fave at my table.

Pizzas are a point of pride for the restaurant and boast a puffy, golden cornicione and an enticing list of toppings. Signature pies include the Forager loaded with roasted mushrooms, kale, and truffle-ricotta cream, the Bacon & Leek blanketed in leek fondue with double-smoked bacon and goat cheese, and the Kona dressed in crispy bacon, roasted pineapple, and a drizzle of spicy yogurt.

Prices are typical of its Financial District address (read: not cheap) though they’ll cut you a deal if you show up late night. Pizzas are half price nightly from 11 pm to close. 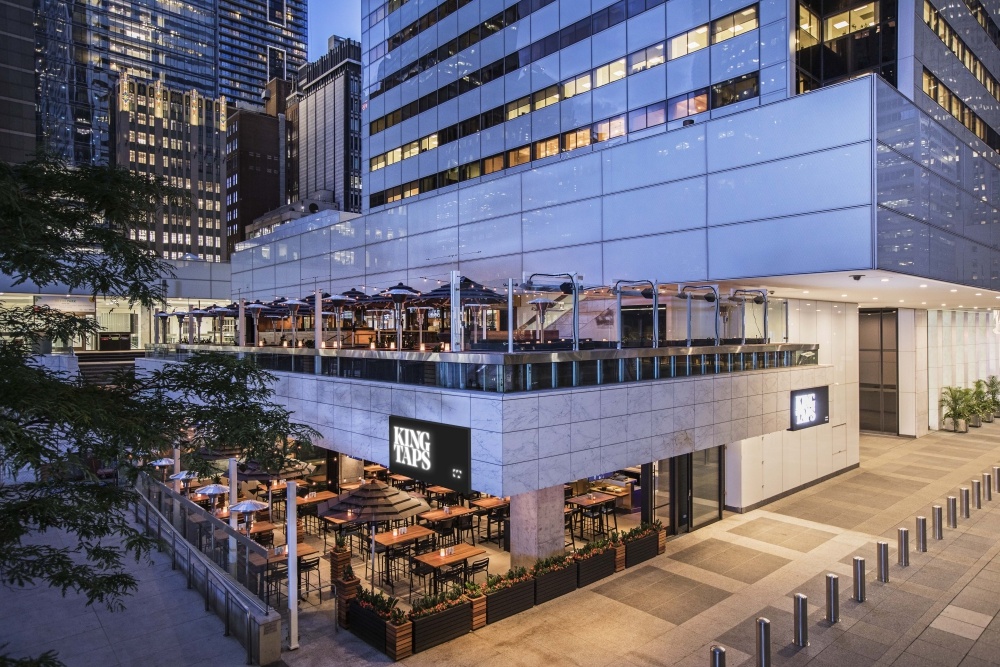