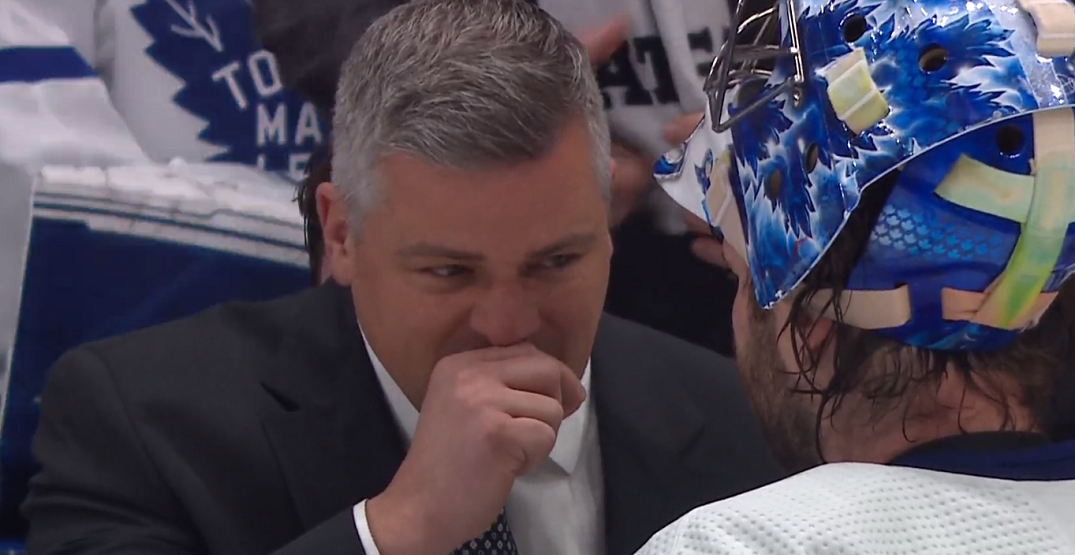 Sheldon Keefe knew that Jack Campbell didn’t quite have it tonight for the Toronto Maple Leafs.

Just two nights after lauding him for a game-saving stop on Steven Stamkos, Keefe ended up pulling Campbell midway through the second period.

With Toronto down 5-0 against the Tampa Bay Lightning in the midst of a 7-3 loss, Campbell was called over to the Leafs’ bench in order to be replaced by rookie Erik Källgren.

But Campbell didn’t quite exit the ice before a long chat with Keefe before eventually sitting down on the bench.

Keefe and Campbell have a conversation as he's pulled pic.twitter.com/C7yktjrW41

Campbell gave up his five goals on just 16 shots, including the opening goal less than a minute into the opening frame off the stick of Stamkos.

“I wanted to talk with Jack [before pulling him.] It was just more so a mindset,” Keefe told reporters postgame. “We need him to be good for the next game… I wanted to be sure that he wasn’t feeling like he really wanted to finish the game and have a good showing or anything like that.”

Here’s Keefe talking about the meeting on the bench with Campbell.

“I just made it clear to him it’s obviously a long way to come back, and that he’d be good to go for the next game.” pic.twitter.com/trih5SsyVI

“I just made it clear to him, it’s obviously a long way to come back and be good to go for the next game,” Keefe added. “I had made the decision a few minutes prior.”

Källgren stopped all 10 shots he faced, though Tampa added a pair of empty net goals to seal the game.

Campbell said he’s hoping to bounce back in Game 5, with the series now tied 2-2.

“I’ll just learn from what I did wrong and be ready to do some great things next game,” Campbell said. “I always want to battle, but I always respect the coach’s decision.”