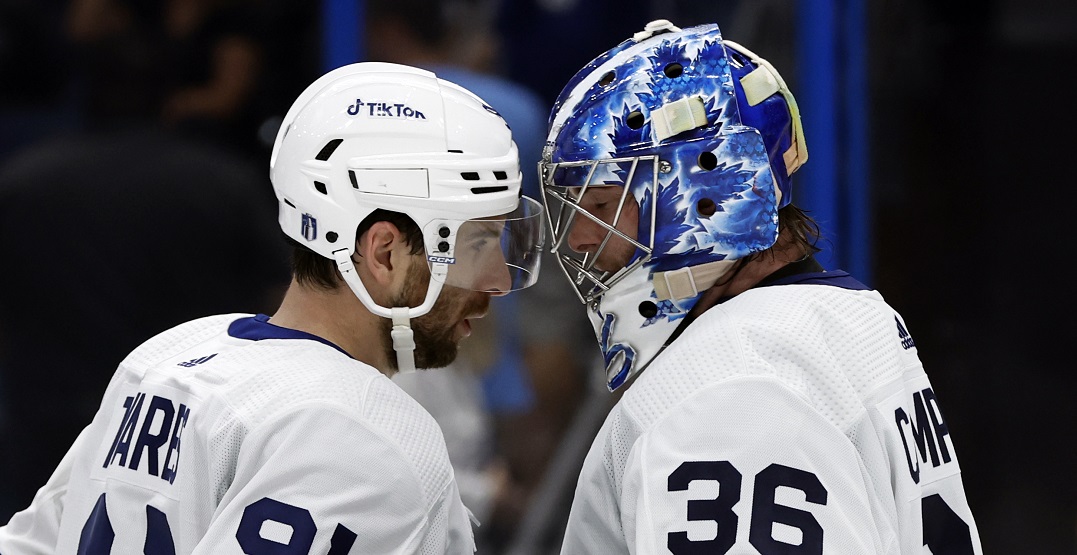 When the Toronto Maple Leafs needed him most, Jack Campbell came through on Friday night.

The Leafs ultimately came out with a 5-2 victory over the Tampa Bay Lightning in a pivotal Game 3, with the scoreline indicating the game might’ve been a bit of a laugher.

But anyone who took in the contest could tell you that it was anything but. After pulling ahead 3-0, the Leafs suddenly saw quick goals go past Campbell.

With just under seven minutes to go in the third period, the Leafs were teetering on well, you know, one of those trademark collapses.

Jake Muzzin was in the penalty box for a hooking call, and open to the side of the Leafs’ net was Steven Stamkos — one of the generation’s most dangerous goal scorers.

But Campbell rose to the challenge and made the save, leaving Stamkos simply left in awe of the athletic stop.

“Hats to him,” Stamkos said postgame. “A great save.”

Leafs coach Sheldon Keefe called the moment a ” game-saving save.”

“There was a bit of a sense on the bench that it’s going in,” Keefe admitted. “Stamkos doesn’t miss those very much when it comes through like that.”

“He made a lot of saves but I think none bigger than that one at the end of the third there,” Matthews said. “That’s what he does. He gives us confidence every time he’s out there.”

Matthews added that he thinks Campbell’s loose play has helped him succeed in the playoffs.

Campbell ended up with 32 saves on the night on 34 shots against. He has now averaged a save percentage of .931 in the playoffs in his career in ten games over the past two seasons.

“The quality of players that Tampa has, they’re gonna make great plays,” Campbell said of the look that Stamkos got. “And they made a great play there. Fortunately, it stayed out.”