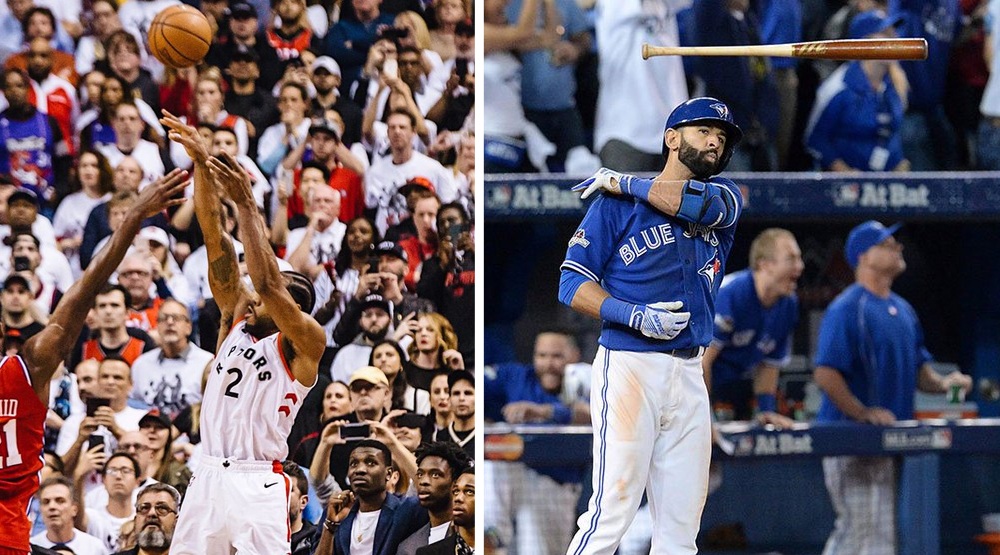 Fifty years from now, people will talk about where they were when they saw Kawhi Leonard make “the shot.”

When we’re all driving flying cars, eating our meals entirely in pill form and our consciousness lives in the cloud, we’ll still reminisce about that Game 7 buzzer-beater by Kawhi.

That’s the pure power of a seminal sports moment. Less than 24 hours after the biggest moment in Toronto Raptors history, “the shot” was already an instant classic. It spawned dozens of videos, gifs, and memes that are still spreading like wildfire.

Toronto sports fans have been lucky to witness not one, but two of these “where were you” moments within the last five years. Leonard’s game-winning bucket over the 76ers was the most recent, but Jose Bautista was responsible for an equally important moment in Toronto sports.

There are interesting parallels between the two touchstones. Both took place in Toronto, both starred the team’s face the franchise, both took place in the second round of the playoffs and both happened in a series-deciding game.

Bautista’s three-run home run wasn’t a walk-off, but it stood as the eventual game-winner over the Texas Rangers in the 2015 ALDS series. With 4.2 seconds left, Leonard called game and delivered the dagger that ended the 76ers’ season.

The gravity of the “the shot” and “the bat flip” were quite similar as well. Bautista’s heroics saved the Blue Jays from an embarrassing elimination from the playoffs. Leonard’s game-winner rescued the Raptors from heading into overtime in Game 7 of the Eastern Conference semi-finals and potential heartache in overtime on home court.

Without knowing what happens to the Raptors the rest of the playoffs, it’s impossible to rank these two moments, but it’s irrelevant to try to decide which one is more important. That’s like asking someone to choose their favourite child; both are unique and memorable in their own special ways. As of now, “the shot” and “the bat flip” are on par with each other.

Bautista’s home run was the culmination of 22 years of disappointment and despair for the Blue Jays franchise. He chucked that all out the window when he threw his bat into the air. On the other hand, before Leonard made history on Sunday night, no one had ever drained a Game 7 buzzer-beater in NBA playoffs history.

To gauge the true staying power of a seminal sports moment, just hypothetically put the star of that moment in a different uniform the following season. Say if Bautista showed up to Toronto in a Yankees uniform in 2016, do fans adore him any less?

If Kawhi hosts an hour-long special this July in the vein of “The Decision,” only to rip open his shirt to reveal a Clippers jersey at the end of it all, do Raptors fans begrudge him for that move? Probably not … because no matter which teams those players suit up for moving forward, those players gave Toronto a memory that will never be taken away.

Just as kids today replicate “the bat flip” on ball diamonds everywhere, surely, every youngster with a basketball was trying to duplicate Leonard’s four-bounce shot into the rim to send the Raptors to the Conference Finals.

Maybe part of the reason why Kawhi’s shot still doesn’t feel real is more often than not, a shot like that doesn’t go in for the Raptors. For every Bautista go-ahead home run and every game-winning shot by Leonard, there are three times as many gut-wrenching Toronto pro sports postseason disappointments over the years.

For a city that’s seen its fair share of sports heartaches over the years, it was nice to see the home team have a bounce in their favour for once.

Eighteen years ago, a very similar shot by Vince Carter at the end of the 2001 Eastern Conference semi-finals clanked out. This time around, Kawhi threw up his shot, it hung up in the air for what seemed like an eternity, it landed and then Toronto lost its collective mind.

Just as Bautista elevated himself to icon status with one swing of the bat, Leonard etched his name into the pantheon of Toronto sports legends. Even if he only sticks around for this year, Kawhi brought redemption to the Raptors franchise.

He still has some work to do, but even if the Raptors don’t win another game the rest of the way, even if he walks away from Toronto at the end of this run, Leonard will go down as a legend.