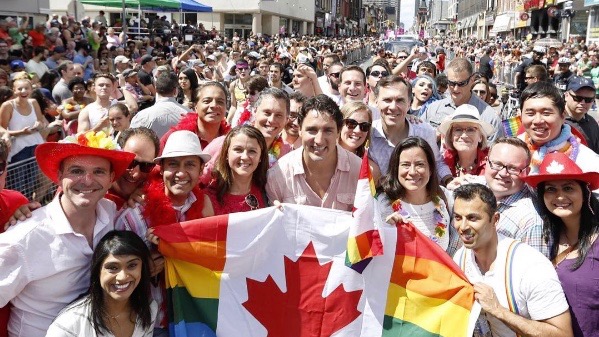 But when you go from having a mayor who refused to show up for the Pride Parade to the first ever sitting Prime Minister to walk in it in just two years, it’s hard not to feel like you’re moving in the right direction.

So when Justin Trudeau walked through the streets of Toronto yesterday to celebrate the LGBTQ community, it was a big deal.

It was hot, it was packed, and it was one hell of a celebration.

Prime Minister @justinpjtrudeau gets splashed with water as he waves a flag while taking part in the annual Pride Parade in Toronto on Sunday, July 3, 2016. It is the first time a sitting prime minister has marched in the parade. 📸: Nathan Denette/The Canadian Press #prideTO #pridetoronto #lgbtpride #LGBT #LGBTQA #loveislove

So amazing JT was at pride today dancing it up! #Pride #pride2016 #PrideToronto #justintrudeau #toronto

Awesome to see @justinpjtrudeau, the first sitting Prime Minister, marching in the Pride Parade. It’s still an uphill struggle for LGBTQ rights and acceptance, but this is a big positive step!

What a historical moment for Canada! Prime Minister Trudeau walking in the #PrideTO Parade… As a teacher, a child who comes into my classroom should feel safe that he/she can express his/her thoughts with respect and his/her feelings are validated and real. He/She should be able to ask help and support from his/her teacher, parents and community as a whole safely and without ridicule and judgment. No bullying, no snickering, no shaming but only love and understanding for each other and from each other 👏🏽🌹❤️😄