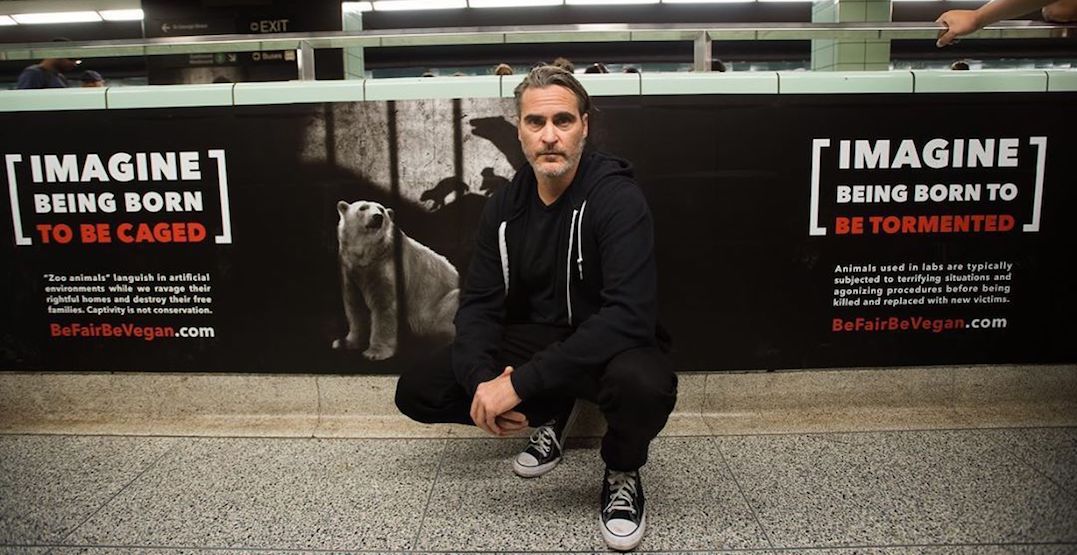 Joaquin Phoenix was spotted at St. George Subway Station on Monday afternoon, taking time away from TIFF to support a vegan campaign.

The three-time Oscar-nominated actor appeared at the station in the late afternoon, as scheduled, according to a release, just hours before he was scheduled to receive TIFF’s first Tribute Actor Award alongside Meryl Streep.

Appearing in solidarity with BeFairBeVegan, an animal justice campaign that uses provocative imagery to share the vegan message, Phoenix has been vegan since the age of three.

He has shown his support for BeFairBeVegan as far back as 2016, when the campaign first launched in New York City.

“In addressing our speciesist attitudes toward other animals, BeFairBeVegan encourages us to consider that our core similarities are far deeper than our surface differences. Now, more than ever, the world needs to hear this message,” he said at the time.

The BeFairBeVegan message will be broadcast for eight weeks across across Toronto, displaying images on streetcars, bus murals, transit shelters, and now, St. George Subway Station.

Founded in 2016, BeFairBeVegan’s message focuses on the inner experiences of the animals we use for food, fabric, research, entertainment, and more.