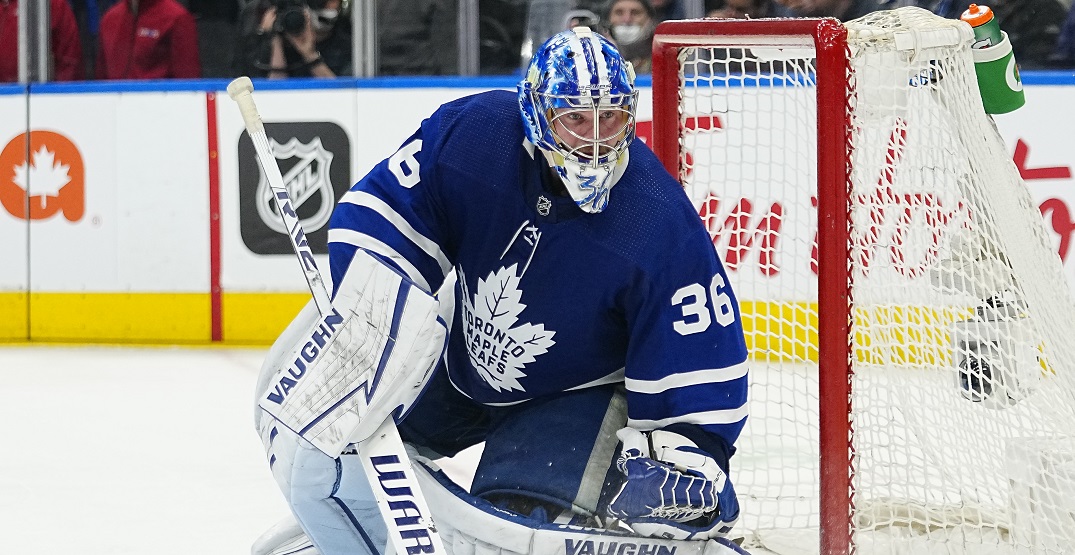 Toronto Maple Leafs’ goalie Jack Campbell heads into this offseason with more uncertainty than any of his teammates.

Since coming over to the team in a February 2020 trade from the Los Angeles Kings, Campbell has been a resounding success story.

The former first-round pick finally established himself as an NHL starting goaltender over the past two seasons, eventually wrestling the No. 1 job away from Frederik Andersen.

Andersen left the Leafs last summer to sign in Carolina on a three-year deal, but it’s now decision time for the organization and Campbell.

In the final year of a two-year, $3.3 million contract originally signed by LA, Campbell is now set up for a big payday this summer when the free agency market opens in July.

If you judge solely by playoff wins and losses, sure, the Leafs haven’t been good enough with Campbell as their #1 guy.  But it’s hard to find many who would blame goaltending as a reason for their recent playoff failures over the last two seasons.

Campbell’s put up a goals-against average of 2.45, a save percentage of .915 in the playoffs over the past two seasons, and has given up two goals or less in seven of those games.

He’s had his share of playoff stinkers, sure — giving up five goals in Games 2 and 4 against Tampa Bay Lightning, though few goaltenders have had much success against the defending two-time Stanley Cup champions.

“Everybody kind of knows what you get with him,” Leafs forward Auston Matthews told reporters at the team’s end-of-season media availability on Tuesday. “He’s just a competitor. He’s the guy [that] always makes everybody feel welcome. It was really impressive to see him kind of grow into [the No. 1] role and take it by the horns.”

At age 30, Campbell has yet to sign a contract longer than three years, having signed five separate deals during his time in the NHL. But after finding himself in a starting role over the last season and a half, a big payday could finally be in store, in Toronto or elsewhere.

Toronto already has one tough goalie contract on their hands, as Petr Mrazek’s signing last summer hasn’t panned out so far.

Dealing with a multitude of injuries, Mrazek played just 20 games and posted a .888 save percentage in his first year of a three-year deal. Mrazek cleared waivers earlier this season, and any trade to get him away from the Leafs would likely have to come with assets being attached.

EvolvingHockey.com’s projection puts Campbell leaving the Leafs to sign a contract over six years worth $5.726 million a season, totalling nearly $35 million over the course of the deal.

It’d be hard, but not impossible, for the Leafs to find that number to pay Campbell. The team heads into the offseason with 17 players signed and $7.8 million in cap space, per Capfriendly.com.

If the Leafs really want Campbell back, a little bit of roster shuffling would allow them to make it happen, which would make him the 12th highest-paid goalie in the NHL based on current salaries. And it’s clear the interest is there from Campbell himself.

“Winning here means everything to me, and I love the city of Toronto,” Campbell told reporters on Tuesday. “I love the fans, my teammates are absolutely incredible, the coaching staff, really everything [has been great]. It’s a tough loss… and that’s all I’ve had time to think about, but as far as negotiating and all that, that’ll be up to [Leafs’ general manager] Kyle [Dubas] and my agent.”

It’s easier said than done, but if the Leafs could find a shorter contract for Campbell, that’d be their best path moving forward.

Just ten goalies league-wide have a deal six years or longer, with four of those goalies putting up a .904 save percentage or lower this past season. It’s a crapshoot as to whether goalies work out on long deals, with several teams around the league feeling the ramifications of those contracts. In perhaps the sport’s hardest job, some players end up filling up their team’s cap sheet while fishing the pucks out of their nets.

It cannot be overstated enough: how he handles Campbell’s next contract could be the biggest decision of Kyle Dubas’ career. For his and the team’s sake, they can only hope to get it right.